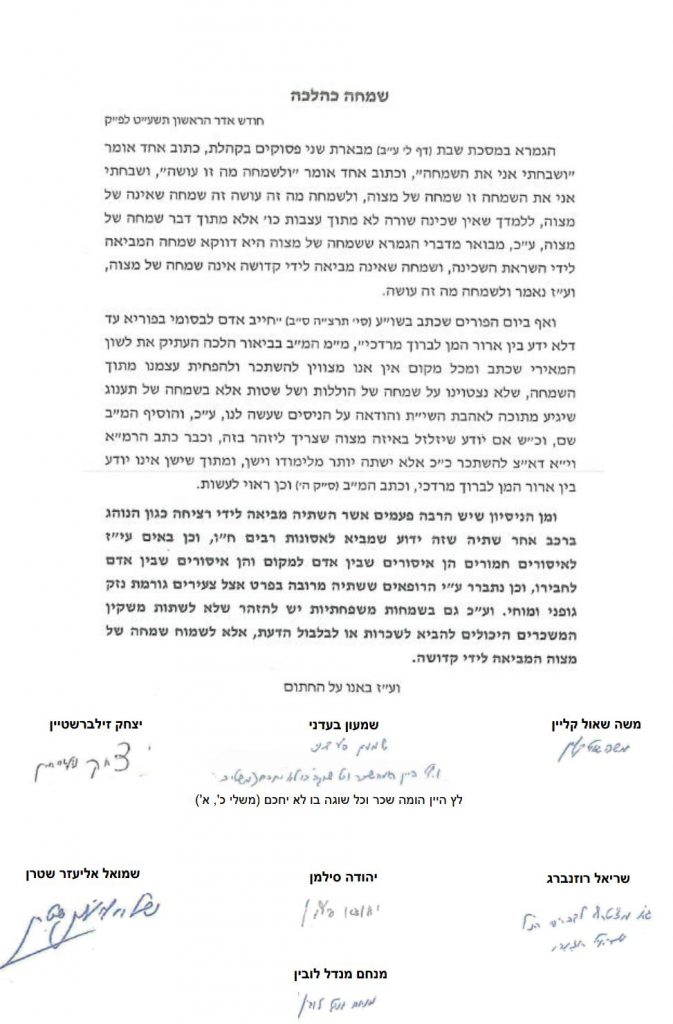 Leading poskim in Eretz Yisrael released a letter on Wednesday calling on the public not to overdrink on Purim.

This, they write, would ensure people did not, chas veshalom, violate “severe transgressions.”

“Even though the Shulchan Aruch (Orach Chaim 695:2) writes that ‘a person is obligated to drink on Purim until he cannot differentiate between ‘cursed is Haman’ and ‘blessed is Mordechai,” at any rate, the Mishnah Berurah, in his Biur Halachah, quotes the words of the Me’iri, who wrote that regardless, we are not commanded to become drunk and lower ourselves out of happiness, since we were not commanded to become lightheaded – rather, we were commanded to be happy out of a love of Hashem and thankfulness for the miracles He did for us.

The Rabbanim also write that “from experience, many times drinking leads to murder, such as in cases where a person drives after drinking. This is known to cause many tragedies, chas veshalom, and this also leads to severe aveiros, both between man and Hashem and between man and his fellow.”

The Rabbanim also quote doctors who say that excess drinking, especially among young people, causes damage to the body and brain.

The letter ends with the Rabbanim calling on the public not to become drunk at family gatherings, either. “At family celebrations as well, it is imperative to be careful not to drink alcoholic beverages which may cause drunkenness or confusion, but rather to be happy with simchah shel mitzvah which increases kedushah.”