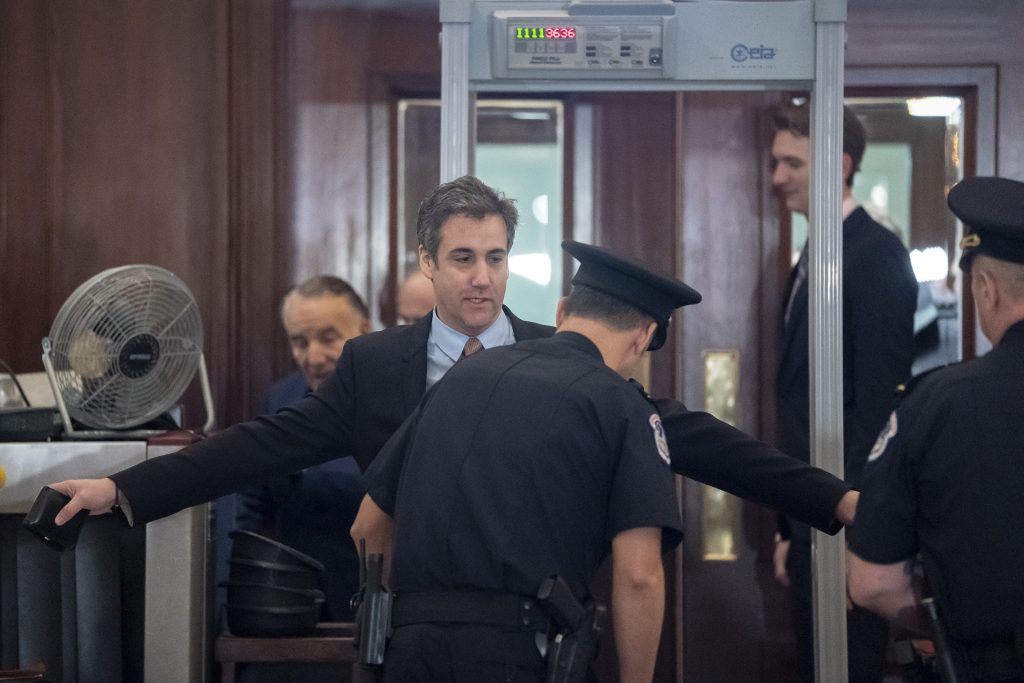 Michael Cohen, President Donald Trump’s former lawyer, turned over documents to the House intelligence committee on Wednesday that show edits to a false written statement he gave to the panel in 2017 about a Trump real estate project in Moscow.

Cohen provided the documents in a closed-door interview with the panel, according to two people familiar with the documents who spoke on condition of anonymity to discuss the confidential meeting.

It is Cohen’s fourth day of testimony on Capitol Hill as he prepares for a three-year prison sentence for lying to Congress and other charges. Cohen acknowledged in a guilty plea last year that he misled lawmakers by saying he had abandoned the project in January 2016 when he pursued it for months after that as Trump campaigned for the presidency.

It’s unclear who edited the documents or what exactly was changed. In public testimony last week, Cohen told the House Oversight and Reform Committee that Trump’s attorneys, including Jay Sekulow, had reviewed and edited the statement he provided to Congress.

Sekulow has denied wrongdoing, saying in a statement after the hearing that the “testimony by Michael Cohen that attorneys for the President edited or changed his statement to Congress to alter the duration of the Trump Tower Moscow negotiations is completely false.”

The Trump Tower Project is one of many under scrutiny as the Democrat-led panel investigates Russian interference in the 2016 election and whether Trump’s campaign was involved, among other matters, including Trump’s foreign financial dealings.

Cohen has become a key figure in congressional investigations after turning on his former boss and cooperating with special counsel Robert Mueller’s probe. During last week’s public testimony before the Oversight panel, he called Trump a con man, a cheat and a racist. He was also interviewed privately by both the Senate and House intelligence committees last week and returned to the House intelligence panel behind closed doors on Wednesday.

Among the issues discussed in Cohen’s closed-door interviews with the House and Senate last week were pardons, according to people familiar with those interviews. They spoke on condition of anonymity to reveal the confidential discussion.

The committee was expected to discuss the subject in Cohen’s second day before the committee, according to one of the people familiar with the meeting.

Cohen told Congress last week that he had never asked for and would not accept a pardon from Trump. But that may not be the full story.

According to people with knowledge of the situation, a lawyer for Cohen expressed interest to the Trump legal team in a possible pardon for his client after a raid last April on Cohen’s hotel room, home and office. The people spoke on condition of anonymity because they were not authorized to discuss it publicly.

No pardon was given, and Cohen ultimately pleaded guilty and is cooperating against the president in separate investigations by the special counsel and by federal prosecutors in New York.

Asked about the pardon issue Tuesday evening, another Cohen attorney, Lanny Davis, said his client was speaking carefully during his public testimony. He acknowledged on MSNBC that Cohen “was certainly looking at the option of a pardon” before he decided to come clean and turn on Trump.

But since then, Davis said, Cohen has been clear that he wouldn’t accept a pardon.

There is nothing inherently improper about a subject in a criminal investigation seeking a pardon from a president given the president’s wide latitude in granting them. But lawmakers have requested information about talks on possible pardons for Cohen and other defendants close to the president who have become entangled in Mueller’s investigation.

House intelligence committee Chairman Adam Schiff (D-Calif.) said after last week’s private meeting with Cohen that the committee had “additional document requests” that they were discussing with him. Schiff would not comment on the substance of the interview but said it helped “to shed light on a lot of issues that are very core to our investigation.”

The intelligence committee investigation is one of several probes Democrats have launched in recent weeks as they delve deeper into Trump’s political and personal dealings.

Trump has said Cohen “did bad things unrelated to Trump” and “is lying in order to reduce his prison time.”