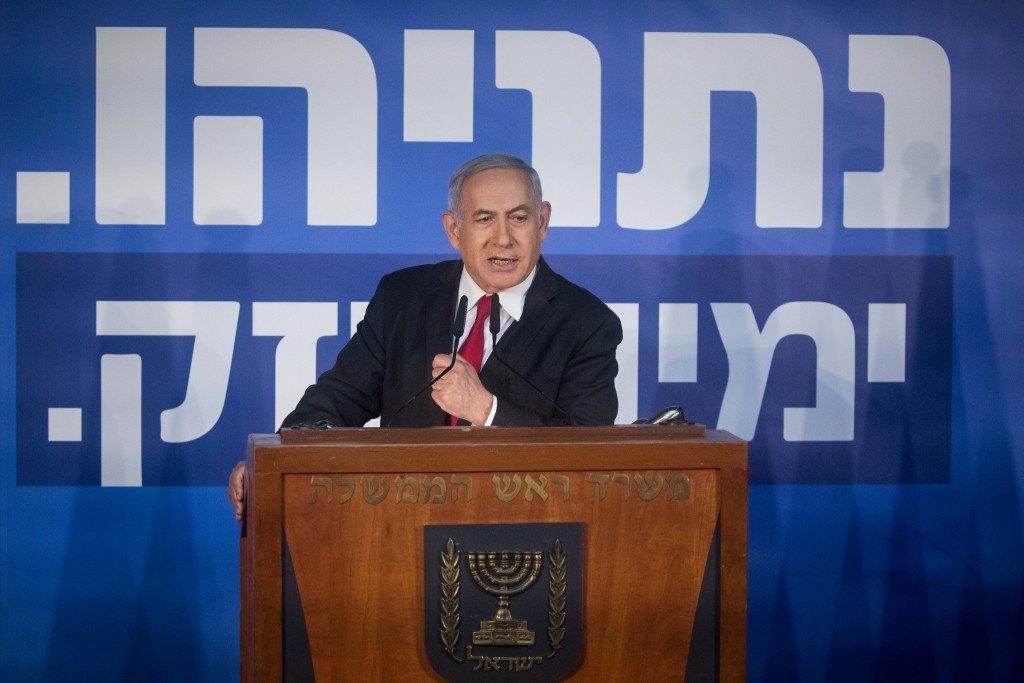 From the start of this election campaign, there has been only one issue: Yes, Bibi or No, Bibi. And that didn’t change with the announcement last week that Attorney General Avichai Mandelblitt intends to indict Prime Minister Binyamin Netanyahu on one count of bribery and two counts of breach of trust.

The Yes, Bibi camp, those who support the reelection of Prime Minister Binyamin Netanyahu, make the following case: He is an excellent prime minister who is entitled to the same presumption of innocence as any other citizen. And as a senior official, he gets the chance to try and convince the attorney general not to indict him, in a process that could easily drag on for a year. (Mr. Netanyahu’s attorneys have to study the evidence, which they’ll see for the first time, and the attorney general has to review their arguments and decide whether to accept them or perhaps to adjust the indictment.)

For the Yes, Bibi camp, these aren’t serious. Certainly nothing compared to the cash-filled envelopes or kickbacks that one of his predecessors was sent to prison for. Politicians and journalists have been playing games of tit-for-tat since newspapers were invented. The politicians leak information to favored journalists, who reciprocate with fawning coverage. Has any politician ever been convicted of breach of trust for such behavior?

The conclusion, therefore, is that the legal establishment and the media, who are overwhelmingly in the No, Bibi camp, are using these charges as a way to bring down a hugely successful prime minister and undermine the democratic process.

The No, Bibi camp, whose hatred for Mr. Netanyahu is visceral, has repeatedly failed to oust him at the polls for one simple reason. He’s very good at his job, and his opponents aren’t even in his league. And everyone knows it.

The “anti” camp tries its best to distract the voters from Mr. Netanyahu’s record of the past 10 years. He’s helped turn Israel into an economic powerhouse, improved Israel’s standing abroad with Africa and the moderate Arab world and developed unprecedentedly close ties with President Donald Trump and Russian President Vladimir Putin. Under his watch, Jews in Israel have never felt more secure: Terrorism is down, the south has blossomed due to quiet from Gaza, and the north has never known such quiet.

His various governments have built highways and trains that brought the periphery to the center of the country. They have raised the minimum wage and eased the economic burden of young families with free early childhood education and free dental care for children until the edge of 18.

They have built fences along the border with Sinai, stanching illegal immigration, and come up with a solution for the tunnel threat from Gaza and Lebanon.

But the strongest argument for the Yes, Bibi camp is the alternative.

Gantz, who still refuses to tell the public his opinions on the issues, is bad enough. But Lapid, who in his two years as finance minister made ruthless funding cuts to the chareidi community and the Torah world, is simply inconceivable. Such leadership could be devastating for the religious, with issues like the draft, the core curriculum and others coming up, but equally devastating for the general public, who have been spoiled by stable, successful government.

The media is casting PM Netanyahu as a danger to democracy, as a threat to the legal system and others tasked with weeding out corruption. Before that, they accused him of being a divisive figure who pitted one element of Israeli society against another (a charge never leveled at Yitzchak Rabin, who told settlers afraid of losing their homes that they could spin like propellers, as far as he was concerned).

One thing would change the media’s attitude toward Netanyahu, would turn them from No, Bibi to Yes, Bibi. All he needs to do is invite one of his leading leftist critics, say at Haaretz, and reveal his plan to unilaterally withdraw from parts of Yehudah and Shomron. The media would suddenly discover that the charges against the prime minister are minor compared to what he can contribute to the country if he is left alone to run the government.

But that’s also the argument of the Yes, Bibi camp. Whether or not he is guilty as charged, he should be left alone for the next few years to run the country in a way that best serves its interests and the interests of majority rule.