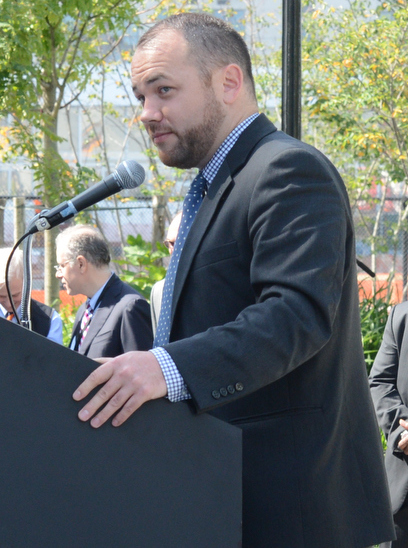 The leader of New York’s City Council vowed to usurp the state’s power to set local tax policy and pass congestion pricing on its own if Gov. Andrew Cuomo and state lawmakers are unable to agree on a plan, and called for a city takeover of the embattled subway system.

“If Albany doesn’t pass congestion pricing this session, the City Council will,” Council Speaker Corey Johnson told an audience of elected officials and policy makers in Long Island City, in his version of a “State of the City” speech. It contained wide-ranging and sometimes Utopian proposals that would require extensive changes to the state’s laws and its constitution, including a call for the city to take over the New York City Transit, the massive agency that runs the subway and bus system.

Such ideas may have problems getting adopted in New York, where the state legislature and governor hold sway over the city’s power to tax anything except real estate. Even the placement of traffic speed cameras required Gov. Cuomo’s approval through an executive order. Yet, Johnson envisioned a future in which the state would transfer a portion of its sales tax revenue to a city-owned transit agency and allow for corporate-tax hikes to help fund it.

“Yes, we need state authority to raise revenues like the corporate franchise tax,” said Johnson, who’s considering a run for mayor. “But there’s no reason the state shouldn’t be on board. The city is the economic engine of the state.”

He advocated that the MTA management be streamlined, saying the agency “is a Frankenstein monster of transit subsidiaries with a 3,000-person headquarters layered on top.”

Johnson’s insistence that the city get all congestion pricing revenue could complicate negotiations as state lawmakers consider such a plan outlined by Gov. Cuomo and Mayor Bill de Blasio last week. They face an April 1 deadline, when the state budget must be finalized.

They are under pressure from at least a dozen suburban state lawmakers who want a cut of the revenue to help their constituents on upgrades to the Long Island Rail Road and Metro-North train line. They also demand that motorists not be charged a congestion pricing fee after paying tolls on bridges approaching the city.

“We are the ugly duckling of the MTA,” said state Senator James Skoufis, a Democrat from Orange County, north of the city.

Matthew Daus, a New York-based national transportation consultant who led the city Taxi & Limousine Commission for more than eight years, praised Johnson for envisioning a new system that would be more accountable than the current MTA, headed by a “mobility czar.” At the same time, Johnson missed an opportunity to address all of the city’s transportation resources — including shared rides and vans, bicycles, and other for-hire vehicles — under one regulatory agency, Daus said.

“Accountability is very important, but so is a holistic approach to transportation that takes into account all the different modes of getting around the city,” Daus said.

Transportation issues should be considered regionally, not locally, said Nick Sifuentes, executive director of the Tri-State Transportation Campaign, an advocacy group. “Moving to city control goes against what we should be doing: creating more regionalism in the system,” he said.

He also questioned how realistic it would be to take control over the system. “The fundamental challenge to the city taking over the subways and buses is the city’s inability to levy its own taxes,” Sifuentes said. “Has there been a time in New York City’s history where the state has voluntarily given up power? It’s hard for me to think of a moment when that’s happened.”