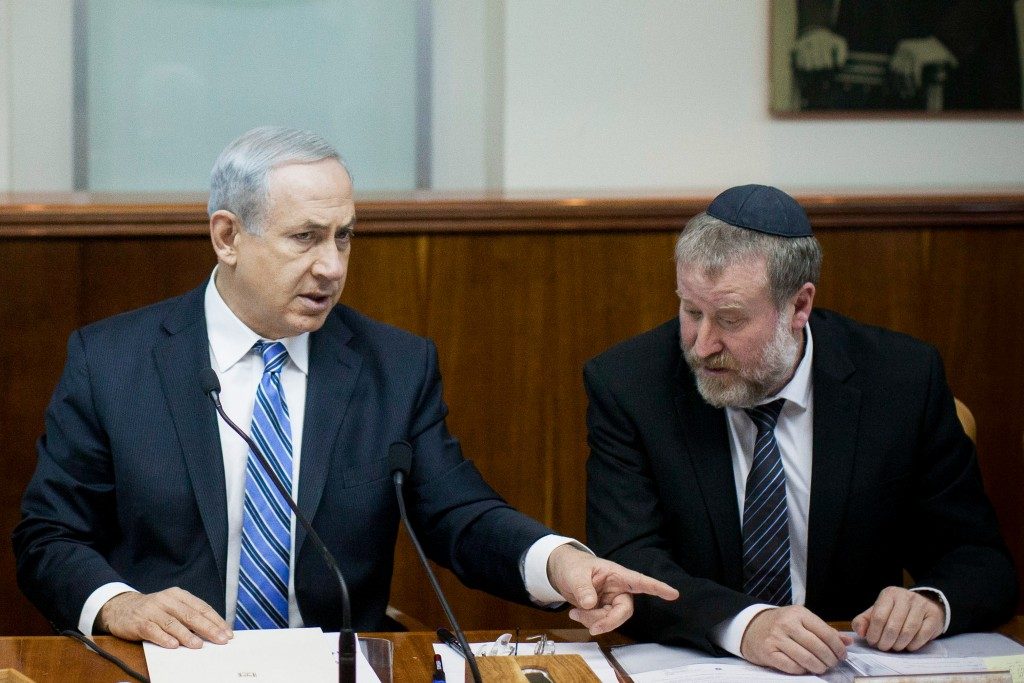 “Everything will collapse like a house of cards,” Binyamin Netanyahu promised during those tense, difficult hours of last Thursday, just before the indictments against him were publicized by his one-time friend and loyal aide, Attorney General Avichai Mandelblit.

In recent months, a campaign has been waged to prevent the publication of the decision regarding the indictments before the elections. The claim was that the public would hear only the allegations against the prime minister, and not his responses, in a hearing expected to be held after the elections. Despite the pressure, Mandelblit decided to publicize the decision.

“The Left wanted to win us in elections in order to establish a Lapid-Gantz government with the assistance of the Arabs to block me,” PM Netanyahu called in a hoarse voice and added, “They are even working to withhold from me the basic right to fund my legal defense, in the face of an army of investigators and prosecutors who work against me 24/7 at a cost of a quarter of a billion shekels to the taxpayer. Meanwhile, it looks like the Left’s pressure is succeeding.”

Has the announcement about the indictments changed anything in the Israeli conscience? Not much. Polls have reflected little difference since the announcements, indicating that the nation that lives in Israel is split in two: those who, in light of the indictments, will vote specifically for Netanyahu, and those who are in any case on the other side of the political map and believe that Netanyahu is corrupt and belongs either at home or in prison.

The first line of the indictments says it all. Mandelblit begins by writing, “For many years you have held senior roles in public service.” That is the straw that broke the camel’s back: Too many years in public roles.

It was the late Menachem Begin who said in Sivan 5725/1965, after nearly 20 years of Mapai rule: “Prolonged rule — and it doesn’t matter by who — brings about corruptibility.” We have nothing against Netanyahu and we hope he will be acquitted, but it appears that we cannot ignore the corruptibility Begin referred to at that time.

However, the way in which they are trying to alter the regime arouses indignation. It is impossible to ignore the cries of Netanyahu that the Left is trying to topple him. There is a clear uprising in Israel against a sitting prime minister who has emerged as a skilled political acrobat who, before bringing down one government, has already established the other.

Ha’aretz, “the newspaper for thinking people,” called in an editorial for Netanyahu to resign. Why? Because he is criticizing the prosecution. “A state cannot function properly when its leader acts like a criminal and blames the police, the prosecution and the media for banding against him.” Do you understand? He’s being persecuted, but he becomes the persecutor.

There’s a comical cycle here, and it’s not clear who started it and who will finish it — and all the sides are right. Netanyahu blames the prosecution and the media for persecuting him, and those who persecute him are also right, because he is not cooperating with them, so it’s justified for them to persecute him. There’s a never-ending feedback loop here that cycles through over and over again, with hatred and a lack of understanding between the sides.

But democratic governments cannot be forcibly changed; that can only happen at the ballot box. And that they have not yet internalized. Police have already recommended that Netanyahu be indicted and he emerged unscathed; it is possible that he will do so again. But this persecution of him — or that which at least appears to be persecution — actually intensifies Netanyahu’s strength within his political base. When he is portrayed as the victim, it works much better in the periphery and central cities, where he has a majority.

How did one of the leaders of the Left once put it? “We need to replace the nation.”