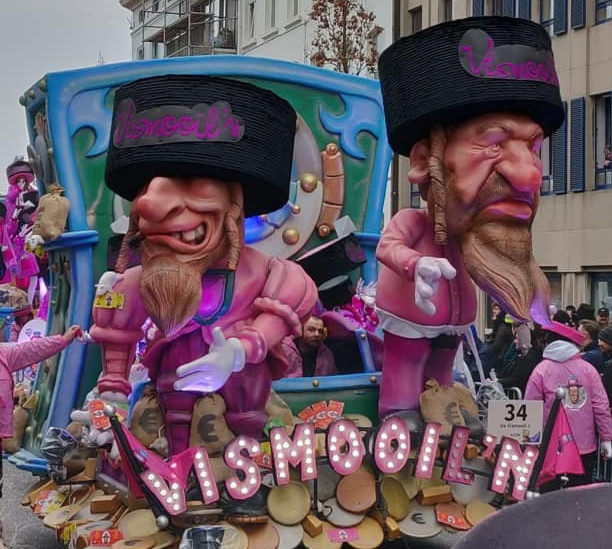 The parade, in the city of Aalst, was part of a festival that occurs in Catholic countries around this time every year.

A group called Vismooil’n creates the puppets for the parade float, titled “Shabbat Year,” in the city of Aalst.

The group told a Belgian blogger last month that it created “Shabbat Year” to address rising prices, although it is unclear if it was referring to general cost of living or the price of participating in the parade.

“Everything has become so expensive [that we thought] if we do 2019, there would be no more money left for next year,” a member of the group was quoted as saying. “So we all went quiet until we smartly decided to go for the Shabbat Year and that was that. So simple.”

The float features two Chassidic Jews, one with a rat on his shoulder. Around their feet are money bags and gold coins. Behind the two puppets is a round window similar to that of many European shuls and an item resembling a mezuzah.

This is not the first time the Aalst parade has featured a float that mocks Jews.

In 2013, a float created by a different group resembling a cattle car used to transport Jews to Nazi death camps. On the wagon hung a poster showing Belgian politicians, dressed as Nazis, holding canisters of Zyklon B, the poison gas used in Nazis gas chambers. Marching near the float were costumed Nazi officers and Orthodox Jews.