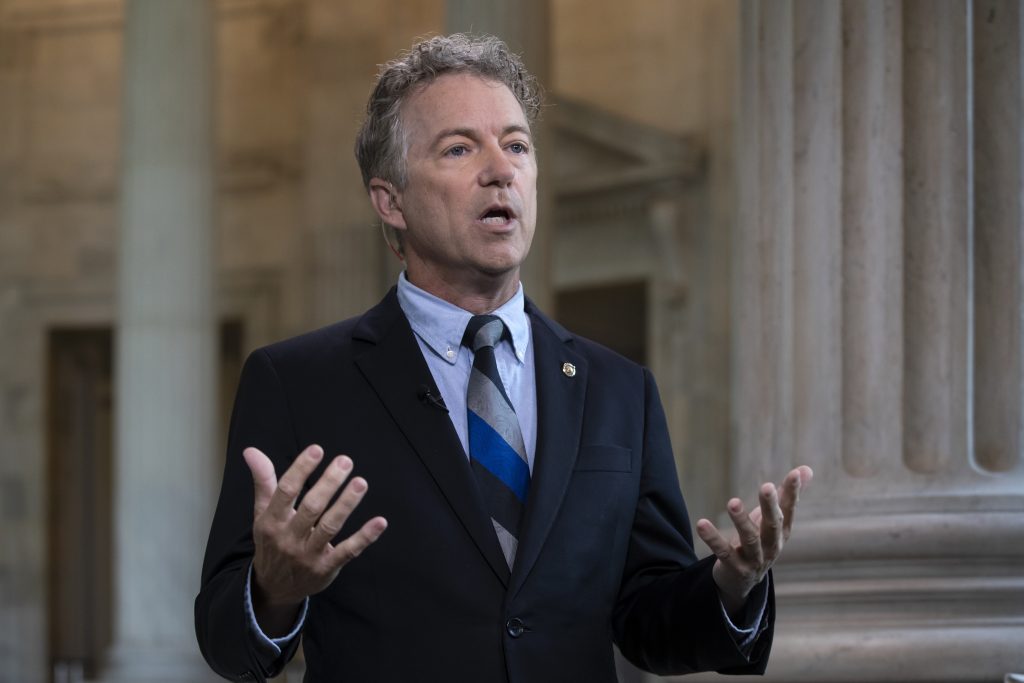 The White House told Senate Republicans on Monday to “keep their powder dry” ahead of a vote to nullify President Trump’s declaration of a national emergency at the U.S.-Mexico border, as the administration worked to limit defections on a measure rebuking the president.

The message was delivered by Zach Parkinson, White House deputy director of government communications, in a meeting Monday morning with Senate Republican communications staffers, according to two people who attended the meeting.

It came as Senate Majority Leader Mitch McConnell, R-Ky., predicted that the resolution to overturn Mr. Trump’s emergency declaration would pass in the Republican-led Senate but ultimately not survive a veto. Over the weekend, Sen. Rand Paul, R-Ky., became the fourth Republican to announce he would vote for the disapproval resolution, ensuring its passage with unified Democratic support.

But the White House is eager to contain further defections from members of Mr. Trump’s own party on his signature issue of building a wall along the southern border. The emergency declaration is aimed at getting additional money for border barriers after Congress refused to grant Mr. Trump’s funding request.

At Monday’s meeting, Parkinson cautioned GOP Senate communications aides against public criticism from their bosses over the emergency declaration, saying that if senators are planning to vote to overturn it they should contact the White House to get further information on Mr. Trump’s rationale, according to the two people who attended the meeting.

And if GOP senators don’t have anything good to say, Parkinson said, they should “keep their powder dry,” according to the two people, who requested anonymity to detail the private discussion.

White House spokesmen did not immediately respond to a request to confirm the account or offer a comment.

At an event in Kentucky on Monday, McConnell told reporters: “I think what is clear in the Senate is that there will be enough votes to pass the resolution of disapproval, which will then be vetoed by the president and then, in all likelihood, the veto will be upheld in the House.”

The Senate vote is expected next week. The House previously passed the measure to block Mr. Trump’s declaration, but Democrats in the chamber fell well short of securing the two-thirds vote that would be necessary to overturn a threatened veto from Mr. Trump.

While Mr. Trump appears to have the votes to withstand a veto in the Republican-led Senate as well, passage of the measure would still serve as rebuke of the president’s policy, and large-scale defections by GOP senators could prove embarrassing for Mr. Trump.

In addition to the four Republican senators who have announced support for the disapproval resolution, numerous others have expressed serious reservations about Mr. Trump’s move, pointing to concerns about constitutional separation of powers, and the potential for future Democratic senators to declare national emergencies on other issues.

Paul joined GOP Sens. Susan Collins of Maine, Lisa Murkowski of Alaska and Thom Tillis of North Carolina in opposing Mr. Trump’s move. Paul announced his opposition to the emergency declaration at an event in Kentucky over the weekend and elaborated in an opinion piece for Fox News Channel, writing: “I would literally lose my political soul if I decided to treat President Trump different than President Obama.”

“Every single Republican I know decried President Obama’s use of executive power to legislate. We were right then. But the only way to be an honest officeholder is to stand up for the same principles no matter who is in power,” Paul wrote.

Fifty-three senators caucus with Republicans and 47 with Democrats, meaning that four Republican defections are enough to ensure passage.

McConnell told reporters that he had hoped Mr. Trump “wouldn’t take that particular path” of declaring a national emergency.

McConnell said he agreed with Republicans who have argued that the declaration could set a precedent for future Democratic presidents to declare emergencies on issues on which they cannot have their way in Congress.

“That’s one reason I argued, obviously without success, to the president that he not take this route,” McConnell said.

The president’s national emergency declaration, issued Feb. 15 after Congress failed to produce the border-wall money he wants, allows him to access $3.6 billion in funds allocated for military construction projects.

Mr. Trump himself has warned about negative political consequences for senators who go against him, telling Sean Hannity of Fox News last week: “I really think that Republicans that vote against border security and the wall, I think you know, I’ve been okay at predicting things, I think they put themselves at great jeopardy.”