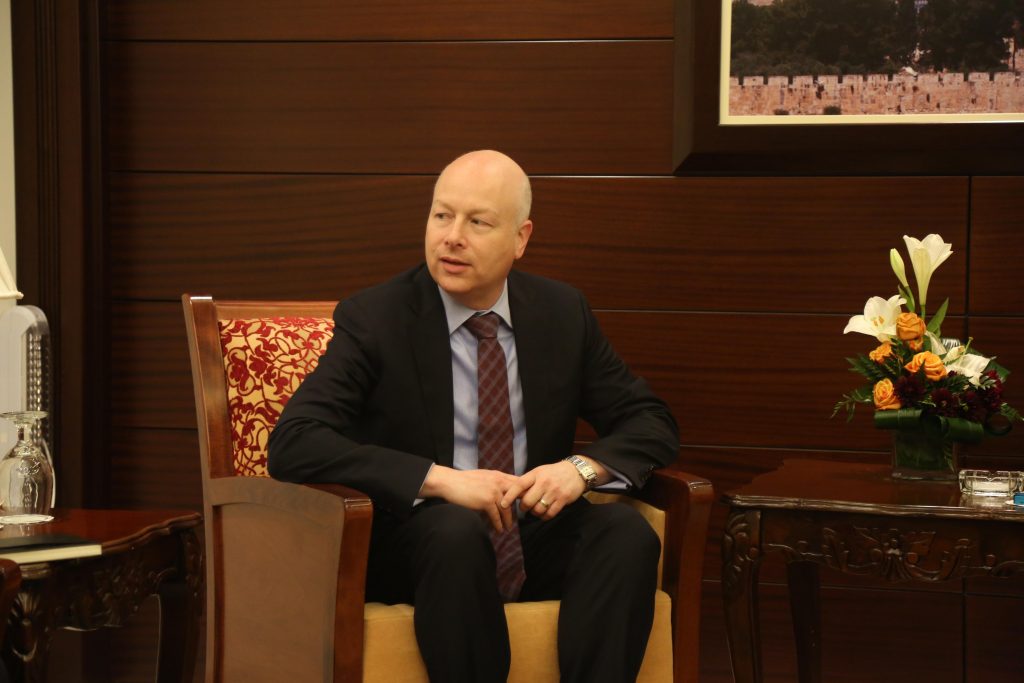 The Palestinian Authority’s official daily is under attack after one of its columnists called U.S. President Trump’s Special Representative for International Negotiations Jason Greenblatt a “mongoloid.”

Omar Hilmi Al-Ghoul, a regular columnist for the Al-Hayat Al-Jadida PA daily and once the adviser to former PA Prime Minister Salam Fayyad on national affairs, in an op-ed rejected the unpublished U.S. Middle East peace initiative, Trump’s “deal of the century,” and compared Greenblatt’s appearance and conduct to that of someone suffering from Down syndrome.

“Anyone who follows the prattle of Jason Greenblatt, President Trump’s envoy in the matter of the deal of the century, sees that his condition is very similar to Down syndrome… Anyone who looks at the American envoy [Greenblatt] discovers that he has external and inner characteristics similar to those suffering from Down syndrome: He is short, his eyes are similar to Mongoloid eyes, he prattles unrestrainedly, and is politically retarded,” Al-Ghoul wrote on Sunday, the Palestinian Media Watch (PMW) reported.

He added that it is not only Greenblatt who suffers from Down syndrome but the entire Trump administration.

“The ill Greenblatt is not the only one who has Down syndrome, for it strikes all the components of the American administration. Anyone who examines the general genes of the components of the Trump administration sees that it is a politically crippled creature,” Al-Ghoul wrote, ending by saying that Trump, Greenblatt and the rest of the U.S. team can “prattle on as much as they wish” about their “ominous” peace plan, but PA Chairman Mahmoud Abbas is the one who decides.

“Mongoloid Greenblatt, together with President Trump, his son-in-law Jared Kushner, and Zionist Ambassador [David] Friedman – can prattle on as much as they wish about the ominous deal. However, they should know for certain that without the signature of PLO Chairman Mahmoud Abbas no deal will pass, and their foolish steps and policy will continue to be pointless,” he wrote.

In its report, PMW noted that “while personal attacks on representatives of the U.S. administration by PA officials are not uncommon, this latest attack sets a new low, even for the PA, its representatives, and its mouthpieces.”

Greenblatt responded to the vicious personal attack by stating that “the comments of Omar Hilmi Al-Ghoul are disgusting and demonstrate a complete disregard for the dignity of every human life.”

“Terms like ‘mongoloid’ and ‘retarded’ have no place in a civilized world. Persons with Downs syndrome deserve our utmost respect and love. Shame on you, Omar!” he added.

U.S. Ambassador to Israel David Friedman stated that he is “disgusted —not for Jason (he’s got broad shoulders) — but by this utter disregard for the value of every human life.”

The American Israel Public Affairs Committee (AIPAC) stated that “this is an outrageous personal attack on a distinguished U.S. official and an insult to basic human dignity.”