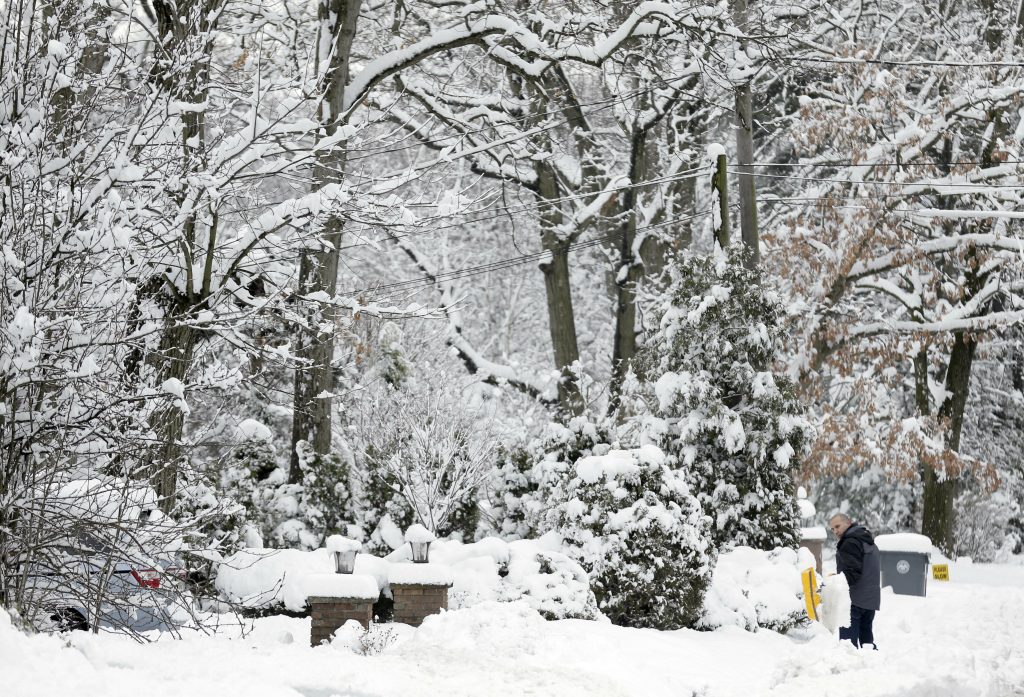 Temperatures are warming, the sun is shining and snow is melting after a storm dumped more than a foot of snow on parts of the northeastern U.S. overnight, prompting school closures, power outages and a messy Monday morning commute.

But the spring-like warm up won’t last: temperatures are expected to plunge into the teens overnight and linger for most of the week, raising the risk of dangerously icy conditions, warned Bryce Williams, a Boston-area meteorologist for the National Weather Service.

“Well, we finally got a good one. We’ve been waiting a whole winter and it finally came,” said Michael Raab as he used a snow blower to clear his driveway in the Boston suburb of Arlington, Massachusetts, on Monday. “The kids were happy there is a snow day. I hope we won’t have too many more of these since we’re looking forward to the spring.”

But, at least in New England, the snowy weather isn’t completely done; more could be on the way Friday or Saturday. That storm is still too early to predict, but it shouldn’t be as significant, said Williams, of the National Weather Service.

Monday’s storm, which started Sunday night but hit the hardest in the early morning hours, was by far the largest storm parts of New England have seen in a relatively quiet winter.

Boston saw about 10 inches of snow, but parts of Connecticut, Rhode Island and Massachusetts saw up to 16 inches, according to the National Weather Service. The Boston-area has now registered about 26 inches of snowfall this season, still below the region’s average of over 35 inches.

“It just takes one storm and we’re up back close to where we typically are this time of year,” said Williams. “We caught up quite a bit with this one system.”

New Englanders have grown accustomed in recent years to seeing winter start slowly and linger past its welcome.

“We’re kind of used to it by now,” said Tracey Scatterday as she shoveled snow and her two daughters played outside their house in Arlington, Massachusetts. “I feel like March is our month now for snow.”

The modest totals were still enough for Democratic Mayor Bill de Blasio to close schools, as did hundreds of other communities throughout the country as they felt the storm’s impacts.

In the Philadelphia-area, the storm appears to have contributed to the death of two teens in a single-car accident about 30 miles Sunday evening. The driver, a 17-year-old, was hospitalized.

And in New England, nearly 60,000 customers were without power at the storm’s peak, though many of those had their power restored by Monday afternoon.

In the Boston suburb of Needham, a snowplow struck a gas meter at an assisted living complex Monday morning, triggering a gas leak and forcing more than 100 elderly residents to evacuate. No injuries were reported and residents were able to return after a few hours.

In northern Maine, a small regional jet carrying 28 passengers and three crew members slid off a runway at Presque Island International Airport. A pilot and three passengers suffered minor injuries and part of the plane’s landing gear appeared to have been torn away as it came to rest in deep snow Monday morning.