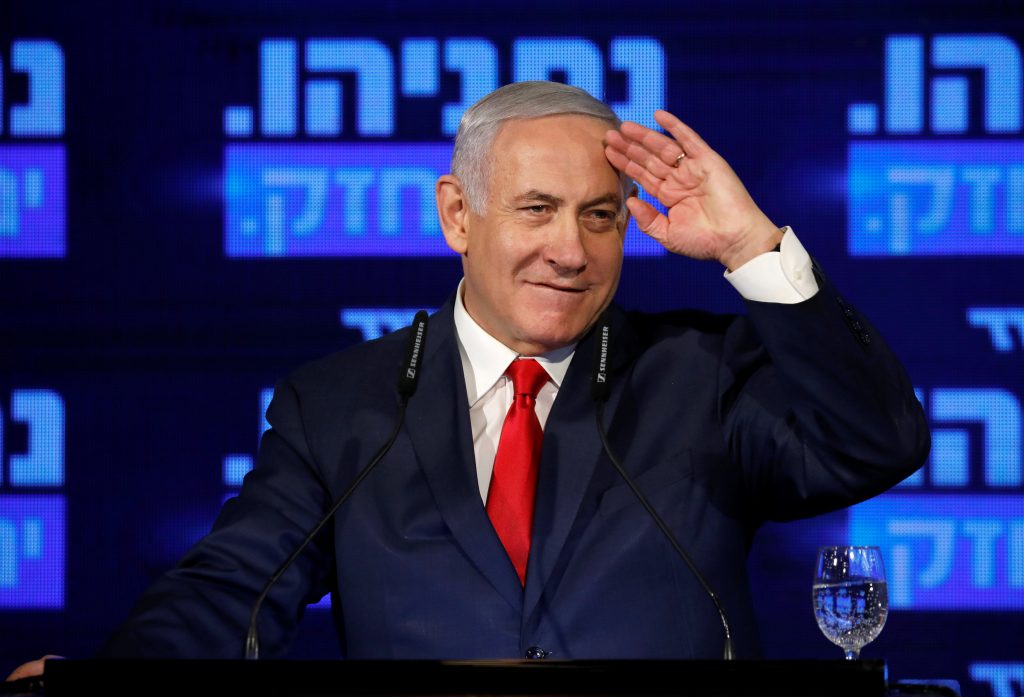 A combative Prime Minister Binyamin Netanyahu officially launched the Likud election campaign on Monday night, lashing out at his foes in the media and the opposition parties during a speech before cheering party activists in Ramat Gan.

PM Netanyahu hammered away at the themes which have already marked the early stages of the campaign, notably the accusation that Benny Gantz’s Blue and White party is a left-wing alliance counting on the support of anti-Zionist Arab parties to form the next government.

The prime minister tried out the rhyming phrase “Bibi or Tibi,” referring to himself and Arab MK Ahmed Tibi, framing the electoral alternative: if Blue and White List won’t sit with him, so that leaves Tibi and the left-wing.

Earlier on Monday, Gantz mocked the Likud attacks on him, telling a meeting of farmers in the northern town of Yesod Hamaale that “all those who are taking a nosedive in the polls and starting to make things up, that these people will go with [Arab lawmaker Ahmad] Tibi and those people will go with [Otzma Yehudit’s mentor, the extremist rabbi Meir] Kahane — none of it is true.”

He added: “We will call for a unity government with all parties, including with Likud, which will join us, and anyone else who is Zionist and sane.”

Making the point that his challengers cannot match his credentials, the premier said he withstood eight years of pressure from former U.S. President Barack Obama to make concessions to the Palestinians.

He repeatedly attacked the left and the media, saying “they are mostly the same” and calling on his supporters to defeat the “left-wing propagandists.”

Despite its contentiousness, Netanyahu’s targets were confined to the opposition party; he made no mention this time of Attorney General Avichai Mandelblit and the corruption charges against him.

“It’s not guaranteed. It’s not in our pocket. It will not be simple. It will be a hard battle,” he told some 300 Likud supporters in the Kfar Maccabiah event hall in Ramat Gan.

In recounting his diplomatic achievements, he listed the numerous countries he has visited, in which he included Afghanistan. Since there have been no previous reports of such a visit, it was not immediately clear whether it was an error or a new disclosure for the occasion.

Netanyahu later corrected himself on Twitter: “I meant Azerbaijan. But who knows? Maybe I’ll visit Afghanistan during my next term in office.”

The speech was attended by fresh controversy, over the conditions of its broadcast.

The Elections Committee chairman, Judge Hanan Melcer, ruled earlier in the day that PM Netanyahu’s speech could only be broadcast on a delay of at least ten minutes.

This was in response to a Labor party petition to prevent live coverage of the speech in prime time, which it charged would violate the law prohibiting election propaganda on the air in the 60 days before an election, apart from specially designated time slots.

This gave Netanyahu a new target for his campaign rhetoric: “Every evening the leftist propaganda channels give a full platform to the left-wing [Blue and White] party of [Yair] Lapid and [Benny] Gantz. Only in the case of the Likud is it ‘election propaganda, ’” he wrote on Twitter.

The prime minister encouraged the public to watch the speech “without delay and without censorship” online.

Following the speech, the Blue and White party said that Netanyahu was “spreading lies and incitement” in order to “divert the conversation from the investigation and the indictment he now faces.”

“Netanyahu knows he’ll be going to trial within a year. He knows his time is up. Instead of worrying about the deteriorating health system, the long lines at the ER, the cost of living, he is only worried about himself,” the party said in a statement. “Israel is desperately waiting for moral and responsible leadership that will care about the everyday life of its citizens, and not with speeches riddled with hate.”

“Even in terms of Netanyahu himself, he has broken records for sowing division, quarrels and strife, and equally high records of narcissism, detachment and lack of awareness, with Third World rhetoric and style. This is how the twilight of a politician looks, as he fights the battle of his political life, and has not the strength to fight the war of his citizens and the state, in which he has no interest.”