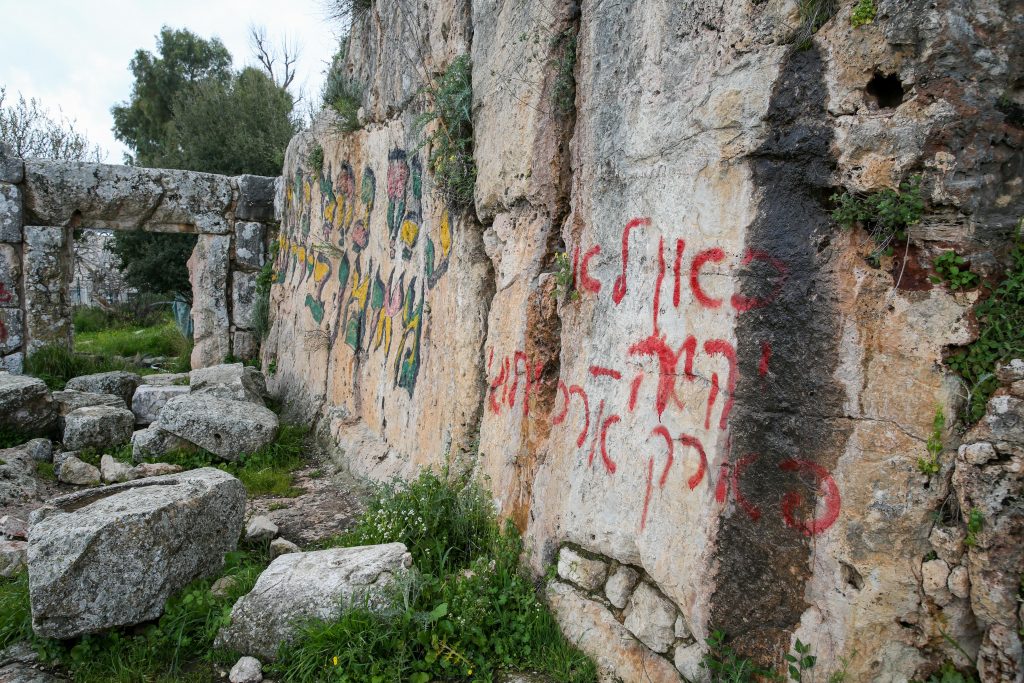 Vandals have spray-painted graffiti on an ancient synagogue located near the kever of Rabbi Shimon bar Yochai in Meron.

The desecration was found on Monday at an 1,800-year-old house of worship in the Mount Meron nature reserve by an Israel Antiquities Authority archaeologist.

Multiple “warnings” in red paint defaced several areas at the ancient synagogue. “There will not be an archaeological park here,” and “Mount Meron is not abandoned,” they read.

Uri Berger, an archaeologist in the Upper Galil, filed a complaint with the police, and an investigation was opened in the Antiquities Authority’s anti-theft unit.

“There is no apparent reason or idea behind the spray of the inscriptions. This is a destructive criminal act by people who come to the ancient synagogue and destroy it in an instant. This is not the first time that this site, which was preserved by the Israel Antiquities Authority only a few years ago, has been vandalized. There are a handful of eccentrics who, ostensibly in the name of faith, damage the Jewish heritage that belongs to all of us. The damage to synagogues by non-Jews in the Diaspora is painful enough, but when it is done by our own people here in the land of Israel it is inconceivable,” Berger said.

In 2014, the IAA Conservation Manager undertook the restoration of the ancient site, funded by the Prime Minister’s Office’s “Milestones” project. During the course of the work, the structure, its walls and the adjacent tower were strengthened. Old graffiti was removed from the walls, mezuzos added, and wild vegetation that weakened the structure and blocked access was removed.