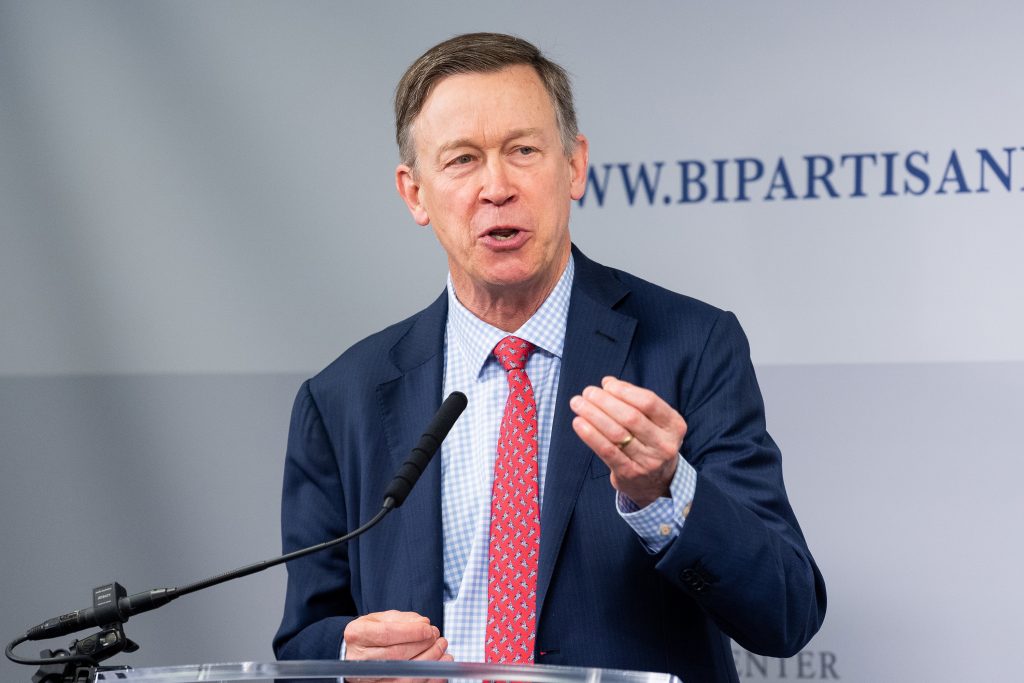 “I’m running for president because we need dreamers in Washington, but we also need to get things done,” Hickenlooper, 67, said in a video announcing his campaign . “I’ve proven again and again I can bring people together to produce the progressive change Washington has failed to deliver.”

He becomes the second governor to enter the sprawling field, after Washington Gov. Jay Inslee announced last week, and is trying to cast himself as a pragmatist who can also take on President Donald Trump. Though as Governor Hickenlooper prided himself for staying above partisan fights, he has argued that his record as a former governor and big-city mayor distinguishes him from a broad field of Democratic presidential aspirants who are backing ambitious liberal plans on health care, taxes and the climate.

Hickenlooper has hedged on supporting Democratic rallying cries like Medicare for All and the Green New Deal to combat climate change. He once worked as a geologist for a petroleum company and was roundly criticized for telling a congressional panel he drank fracking fluid while arguing for the safety of the energy extraction technique.

It was after Hickenlooper was laid off from his geologist position during the energy bust of the 1980s that he inadvertently started on his road to politics. He opened a brewpub in a then-desolate stretch of downtown Denver that unexpectedly took off. That enabled Hickenlooper to become wealthy by building a mini-empire of restaurants and bars. It also led to him making a quixotic run for Denver mayor in 1993. Campaign ads featured Hickenlooper feeding quarters into parking meters to protest the city’s charging for Sunday parking downtown. He won handily.

As mayor, Hickenlooper helped persuade dozens of suburban cities, sometimes led by Republicans, to back a tax hike to fund a light-rail network. He was filmed diving out of an airplane to advocate for a statewide ballot measure to suspend an anti-tax measure passed in the 1990s and allow the state budget to grow. When he ran for governor in 2010, he featured an ad of himself fully dressed, walking into a shower to scrub off negative attacks.

It’s all part of Hickenlooper’s quirky political image — he vows not to run attack ads and has frequently made fun of his tendency to misspeak and wander off political message.

Hickenlooper was supported by some Republicans as governor. His first term was marked by a series of disasters and tragedies, some of which he alluded to in his launch video — record wildfires and floods, the assassination of his own prison chief by a member of a white supremacist prison gang and the 2012 Aurora theater shooting, which killed 12 people. After that attack and the Sandy Hook Elementary School shooting massacre in Connecticut months later, Hickenlooper called for gun control legislation and signed bills requiring universal background checks and limiting magazine capacity to 15 rounds.

“We’re a purple state that got universal background checks passed,” he told ABC on Monday, stressing how he can “bring people together on the other side and actually get stuff done.”

He announced in 2013 that he opposed the death penalty and refused to execute a quadruple-murderer who was on death row. And, as he prepared to leave office and was openly mulling a presidential bid, he ordered the state to adopt California’s low-emission vehicle standards to fight climate change.

The last move was widely seen as shoring up an area that has long created tension for Hickenlooper — his relationship with the energy industry. Groups opposed to the expansion of energy exploration into Denver’s suburbs often complained that Hickenlooper was too close to the oil and gas business, which remains a powerful force in Colorado politics.

Another potential vulnerability for Hickenlooper is money. As a former governor, he can’t recycle donations from prior campaigns into a presidential account, as can the many U.S. Senators in the field. Hickenlooper’s political committee raised $1 million during the first two months of the year, in contrast to senators such as Kamala Harris of California, Amy Klobuchar of Minnesota and Bernie Sanders of Vermont, who raised more than that amount in the 24 hours after they announced their campaigns.

Still, Hillary Clinton vetted Hickenlooper as a possible running mate in 2016, and Democrats have spoken about his potential national appeal for years. In his launch video, Hickenlooper says, following images of President Trump: “As a skinny kid with Coke bottle glasses and a funny last name, I’ve stood up to my fair share of bullies.”

Hickenlooper is expected to focus heavily on Iowa, where many Coloradans come from and a state where his low-key, genial approach could be potent. In previous trips he’s emphasized his record and how he can bring warring parties together. During a January swing, he stopped by a Des Moines brewpub where a customer asked him how he’d win the primary of “who hates Trump the most?”

Hickenlooper responded by rattling off his governing accomplishments.

“Everyone yells at Trump, he will win,” Hickenlooper said. “You have to laugh at him and joke along and say: ‘Hey, this is what I did.'”