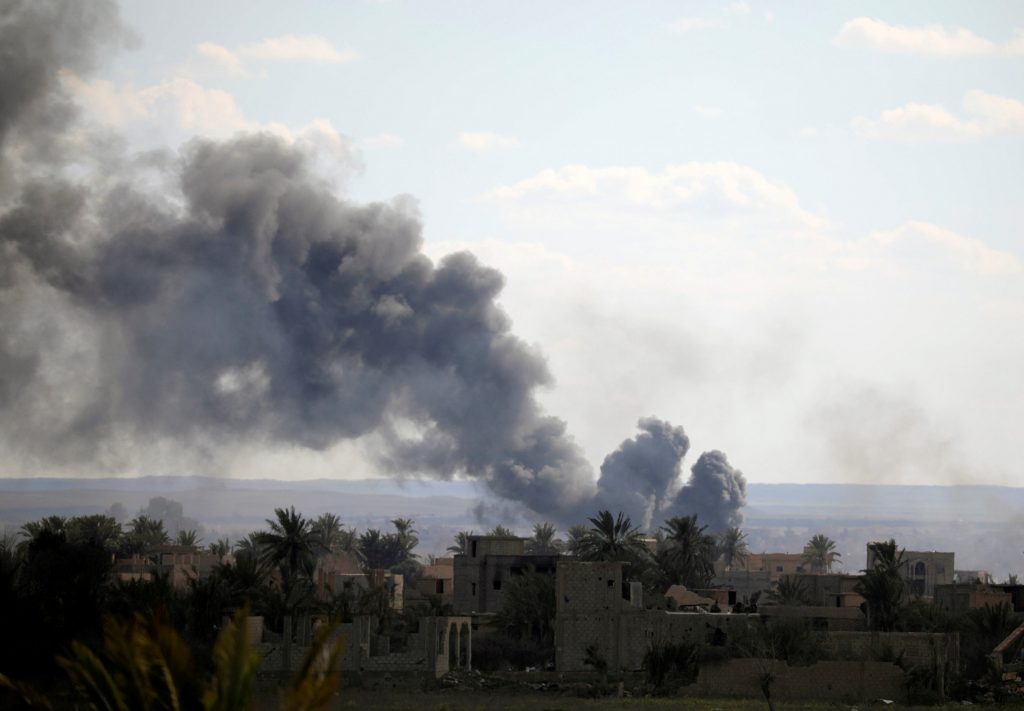 Islamic State unleashed car bombs against the Syrian Democratic Forces (SDF) assaulting Baghouz, in a last-ditch effort to stave off defeat in its final patch of territory, fighters from the U.S.-backed force said on Sunday.

Capturing the besieged village in eastern Syria will be a milestone in international efforts to roll back the jihadists, whose self-styled “caliphate” covered roughly a third of Syria and Iraq at its height in 2014.

But it is universally accepted that the group, which has been in territorial retreat since then and suffered its major defeats in 2017, will remain a security threat as an insurgent force with sleeper cells and some remote pockets of territory.

The SDF had said it expected a “decisive battle” on Sunday after advancing gradually for 18 hours to avoid landmines sown by Islamic State (IS), whose fighters are also using underground tunnels to stage ambushes and then disappear.

But there was no sign of the assault ending by Sunday afternoon as the IS fighters – believed to be predominantly foreign jihadists – put up fierce resistance and the SDF said its advance was impeded by landmines and car bombs.

A Reuters witness spotted Islamic State militants inside the enclave as gun battles raged intermittently and the SDF fired mortar and artillery shells. Warplanes from the U.S.-led coalition flew overhead.

A spokesman for the U.S.-led coalition said the pace of the advance had ebbed.

“ISIS fighters have been using suicide vests and car bombs to slow down the SDF offensive and hide from Coalition strikes in the area of Baghouz,” Colonel Sean Ryan said.

“They still hold civilians and are lacing the tunnels with IEDs (improvised explosive devices) as well.”

The SDF has previously estimated several hundred IS insurgents to be inside Baghouz. The coalition has described them as the “most hardened” militants.

But Ryan said their hiding underground made it difficult to determine numbers.

The SDF said that several car bombs were destroyed by coalition air strikes in the past two days and that SDF fighters had destroyed three other car bombs targeting SDF positions.

The jihadists had also shelled the approaching force.

Sinjar Shammar, from the Kurdish YPG, which spearheads the SDF, was wounded when shrapnel from a shell struck the armored vehicle he was driving.

“My comrade was sent to the hospital. His leg is gone,” said Shammar, 22, as his arm was being bandaged at a first-aid point.

“(But) morale is great (at the front line). I will return to the comrades in a bit … God willing, we will triumph.”

After declaring its “caliphate” across large swathes of territory it had seized in flash offensives in Syria and neighboring Iraq, IS attracted thousands of foreigners to live under its rule and defend its realm.

But its rapid expansion also attracted an array of enemies, both local and international, who began rolling back those gains. As IS territory shriveled, thousands of fighters, followers and civilians retreated to Baghouz, a small cluster of hamlets and farmland along the Euphrates River.

Over the past few weeks people poured out of the shrinking IS territory in greater numbers than expected, holding up the final assault. An SDF commander told Reuters on Thursday that many of those leaving the enclave had been sheltering underground in caves and tunnels.

After extricating the remaining civilians, the SDF resumed its assault on Friday evening. It has not ruled out the possibility that some militants have crept out, hidden among non-combatants.

The SDF commander-in-chief on Thursday said that his force would declare victory within a week. He was later contradicted by U.S. President Donald Trump, who said the SDF had retaken 100 percent of the territory once held by IS.

Washington has about 2,000 troops in Syria, mainly to back the SDF against IS.

Trump announced in December he would withdraw all of them, but the White House partially reversed itself last month, saying some 400 troops would stay.