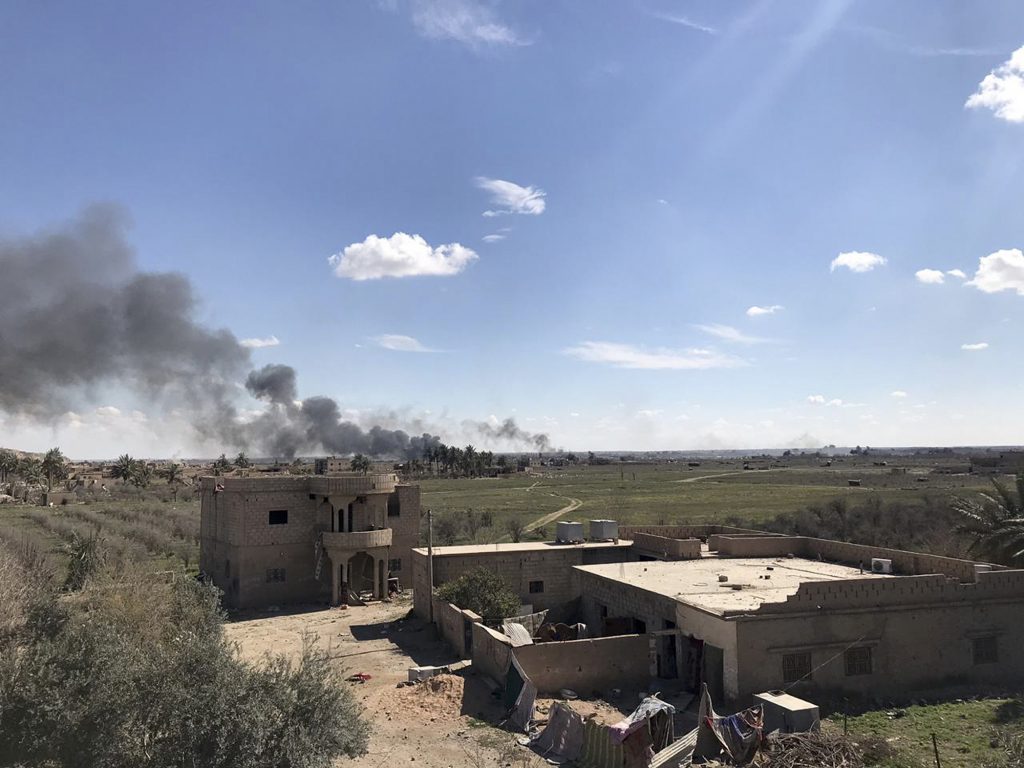 Columns of black smoke billowed from the last small piece of territory held by Islamic State terrorists on Sunday as U.S.-backed fighters pounded the area with artillery fire and occasional airstrikes.

Commanders of the Kurdish-led fighters known as the Syrian Democratic Forces said fierce clashes were taking place as they advance toward the last speck of land controlled by the Islamic State terror group. The terrorists fought back with snipers, suicide bombs and booby traps.

Fires still smoldered from the area and ammunition exploded time and again, a day after an airstrike hit a building, setting off a huge blast.

“It must be a main weapons depot,” said Sefqan, an SDF commander using only his nom de guerre.

The U.S.-backed forces resumed an offensive to recapture the tiny area in the village of Baghouz in eastern Syria on Friday night, after a two-week pause to allow for the evacuation of civilians from the area. Retaking the sliver of land would be a milestone in the devastating four-year campaign to end IS’ self-proclaimed Islamic caliphate that once straddled vast territory across Syria and Iraq.

However, the group continues to be a threat, with sleeper cells in scattered desert pockets along the porous border between the two countries.

A few hundred IS terrorists, many of them believed to be foreigners, remain holed up inside Baghouz, with an unknown number of civilians.

Machineguns could be heard echoing across the territory. Associated Press journalists in Baghouz saw black smoke from an apparent strike on a barrel of fuel. Gunfire followed another strike on the edge of the camp. Burned vehicles could be seen, abandoned in farmland beyond the village. Through binoculars, IS fighters could be seen walking around.

Mustafa Bali, the SDF spokesman, said coalition airstrikes destroyed several car bombs during the past two days of battle in Baghouz. In a tweet, he said three car bombs that were trying to hit SDF positions were destroyed.

Overnight, machinegun tracers could be seen in the skies over Baghouz and aircraft circled overhead.

“The night for us and the morning for them,” said Abu Ghadab, another commander of the SDF. The terrorists usually attack during the day as they don’t have night vision goggles while the SDF advances at night, he explained.

The U.S.-backed fighters say IS terrorists are mostly hiding underground, in tunnels.

The global fight against the Islamic State group is one conflict in a country that has been at civil war for nearly eight years.

Near the northwestern province of Idlib, a Syrian jihadist group linked to al-Qaida killed 21 Syrian soldiers and allied militiamen, in one of the most serious violations of a months-old truce in the area, according to activists and a Syria war monitor.

Sunday’s attack by Ansar al-Tawhid terrorists was carried out in the village of Massasneh in the north of Hama province, according to the Britain-based Syrian Observatory for Human Rights.

A statement by the Syrian Foreign Ministry confirmed the attack, saying “terrorist groups” launched a pre-planned attack on armed forces stationed along the axis of Massasneh, killing and wounding a number of soldiers.

“Syria confirms the full readiness and integrity of the Syrian army in dealing with these crimes and violations,” the statement added.