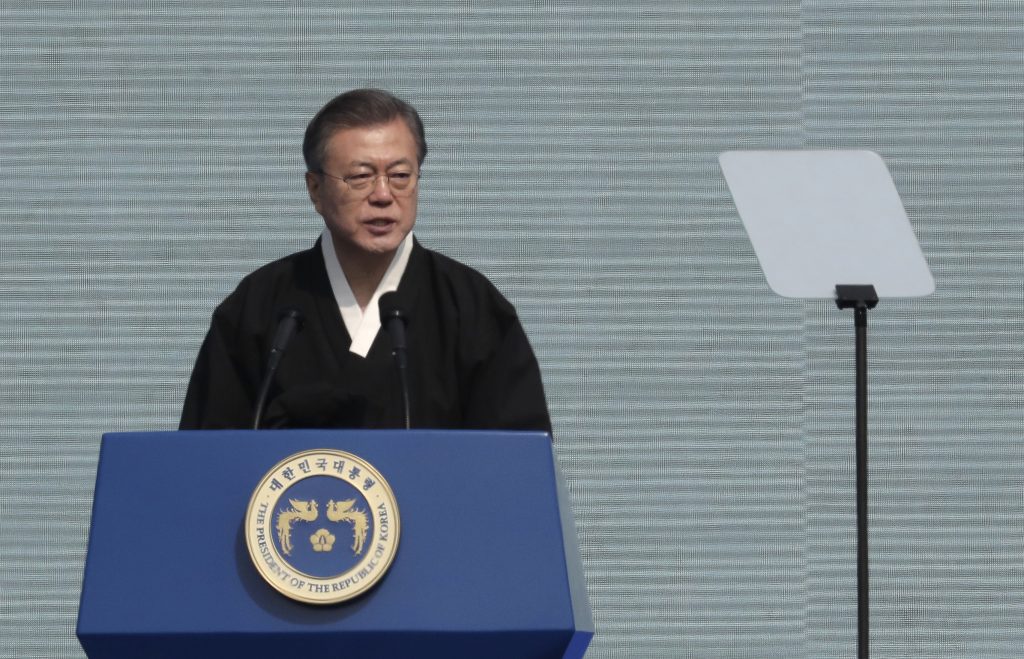 South Korea will work with the United States and North Korea to ensure they reach agreement on denuclearization, the South’s president said on Friday, a day after talks between the U.S. and North Korean leaders collapsed over sanctions.

A second summit between President Donald Trump and North Korean leader Kim Jong Un, in Vietnam, was cut short after they failed to reach a deal on the extent of sanctions relief North Korea would get in exchange for steps to give up its nuclear program.

South Korea‘s President Moon Jae-in has been an active supporter of efforts to end confrontation on the Korean Peninsula, meeting Kim three times last year and trying to facilitate his nuclear negotiations with the United States.

“My administration will closely communicate and cooperate with the United States and North Korea so as to help their talks reach a complete settlement by any means,” Moon said in a speech in the South Korean capital, Seoul.

Moon also said South Korea would consult the United States on ways to resume joint projects with the North, including tourism development at Mount Kumgang and the Kaesong Industrial Complex, both in North Korea.

The Hanoi summit came eight months after Trump and Kim met for the first time in Singapore and agreed to establish new relations and peace in exchange for a North Korean commitment to work toward complete denuclearization of the Korean Peninsula.

Trump said two days of talks had made good progress but it was important not to rush into a bad deal. He said he had walked away because of unacceptable North Korean demands.

“It was all about the sanctions,” Trump told a news conference after the talks were cut short. “Basically, they wanted the sanctions lifted in their entirety, and we couldn’t do that.”

He said North Korea had offered a realistic proposal involving the dismantling of all of its main nuclear site at Yongbyon, including plutonium and uranium facilities, by engineers from both countries.

“This is the biggest denuclearization step we can take based on the current level of trust between the two countries,” Ri said.

North Korean Vice Foreign Minister Choe Son Hui told the same briefing she had the impression that Kim “might lose his willingness to pursue a deal” after the U.S. side rejected a partial lifting of sanctions in return for destruction of Yongbyon, “something we had never offered before.”

But despite raising that doubt, both sides indicated they wanted to maintain the momentum and press on.

“We are anxious to get back to the table so we can continue that conversation that will ultimately lead to peace and stability, better life for the North Korean people, and a lower threat, a denuclearized North Korea,” U.S. Secretary of State Mike Pompeo told a news conference in Manila.

The state KCNA news agency said Kim and Trump had a constructive and sincere exchange and decided to continue productive talks, without mentioning that the talks ended abruptly with no agreement.

Kim, who is due to leave Vietnam on Saturday, also expressed gratitude to Trump for traveling so far and actively putting in efforts to get results, KCNA said.

The United Nations and the United States ratcheted up sanctions on North Korea when the reclusive state conducted repeated nuclear and ballistic-missile tests in 2017, cutting off its main sources of hard cash

The United States has demanded North Korea‘s complete, verifiable and irreversible denuclearization before sanctions can be lifted. North Korea has denounced that position as “gangster-like.”

The U.S. official said North Korea had proposed closing part of its Yongbyon nuclear complex in exchange for the lifting of all U.N. sanctions except those directly targeting their weapons of mass destruction programs.

“The dilemma that we were confronted with is the North Koreans at this point are unwilling to impose a complete freeze on their weapons of mass destruction programs,” said the official, who declined to be identified.

“So to give many, many billions of dollars in sanctions relief would in effect put us in a position of subsidizing the ongoing development of weapons of mass destruction,” said the official, who spoke on condition of anonymity.

Analysts estimate North Korea may have a nuclear arsenal of 20 to 60 weapons which, if fitted to its intercontinental ballistic missiles, could threaten the U.S. mainland.

The collapse of the summit leaves Kim in possession of that arsenal, though Trump said the North Korean leader had agreed to maintain his moratorium on nuclear and ballistic-missile tests.

Trump spoke to the leaders of South Korea and Japan on his way back from Hanoi and told them the United States would work with them and talk to North Korea, the White House said.