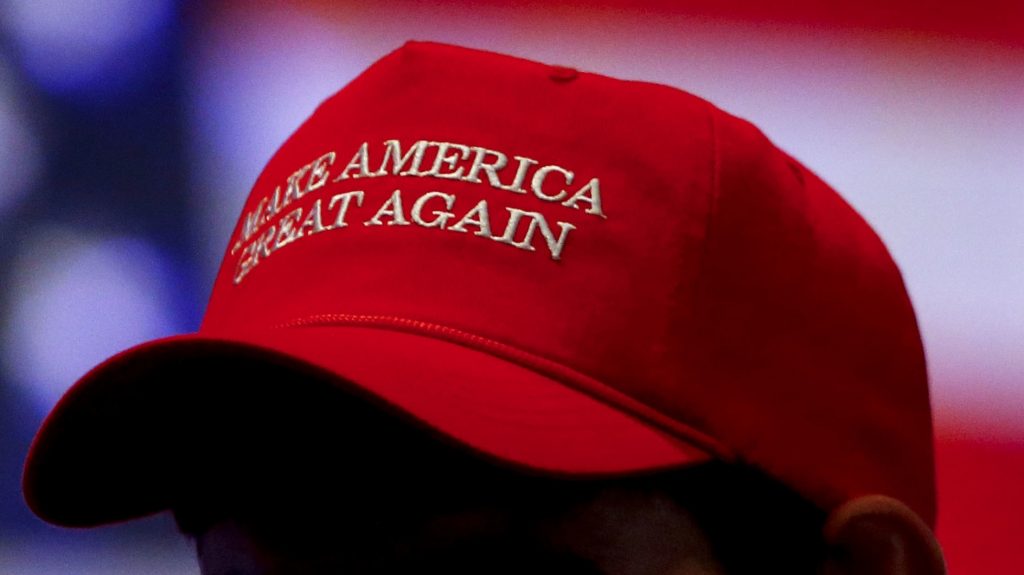 Two weeks ago, a Massachusetts woman and Brazilian national was arrested for accosting a man wearing a Make America Great Again hat while he ate at a Mexican restaurant.

Rosiane Santos, 41, was recorded on video swatting the hat off the man’s head and later told police she didn’t believe he should be allowed inside a Mexican establishment while wearing President Donald Trump’s MAGA refrain, according to a report from the Falmouth Police Department. Santos, who was intoxicated, was arrested on charges of disorderly conduct and simple assault and battery — both misdemeanors — and was escorted from the restaurant.

On the way out, she hit the man a final time and swatted at his hat. Santos’ bail was set at $40 and she was released. She later pled not guilty.

Now Santos — who is living in the U.S. without legal documentation — also faces possible deportation.

Immigration and Customs Enforcement deportation officers from the department’s Fugitive Operations Team detained Santos on Tuesday, an ICE spokesperson said in a statement. The woman was released from ICE custody and entered into removal proceedings in federal immigration court, the official said. She is expected to appear in court at a future date.

It’s not clear how ICE learned of Santos’ case. The Falmouth Police Department told The Washington Post that it did not know of her immigration status at the time of her arrest and did not notify ICE. It’s possible, a police representative said, that a notification to ICE was triggered when Santos’ name was entered into its systems.

“ICE does not publicly discuss intelligence and research tools and methods that our agents and officers may use in their work,” John Mohan, an ICE spokesman for the New England region, told The Washington Post.

Santos’ lawyer, Katarina Kozakova, told Boston.com that Santos is married to a U.S. citizen and is waiting for her green card to be approved. ICE’s involvement in her case means her green-card application now will be reviewed by an immigration judge, rather than U.S. Citizenship and Immigration Services, Kozakova told Boston.com.

“That is the only change this arrest has cost Rosiane in terms of her immigration,” Kozakova said.

Kozakova did not immediately respond to an interview request from The Post.

Bryton Turner identified himself as the victim of the assault in a statement to NBC News. He is also listed on the police report. Turner told NBC that Santos began “harassing me verbally” as soon as he walked into the restaurant.

“All I said was, ‘I can wear this hat wherever I want; this is America,'” Turner told NBC News.

He said he began taking video of the incident “so she would stop,” NBC reported. “I didn’t think it would blow up like this.”

The video, which was posted to social media but later taken down, shows Turner sitting at what looks like a bar and filming his own face as Santos walks behind him.

“See this right here, this is the problem,” Turner says in the video. “Ignorant people like this. I’m just trying to sit here and eat a nice meal, and look at this.”

“You see this?” Turner says as Santos approaches him from behind, pushes his MAGA hat over his eyes and says expletives.

“People like that, that’s the problem,” Turner says. “That’s the problem with our America these days. People are just ignorant, they want to lash out on people that are educated.”

In the police report, officers said Santos used an expletive to characterize how she felt about the man’s support of President Trump. The officers wrote that her speech was slurred and she was clearly intoxicated. As one officer tried to escort her from the restaurant, the police report said, Santos “began walking but stopped behind the male wearing the red hat, grabbed his hat and moved it around in a circular motion while violently pushing his head down toward the bar.”

Turner did not respond to an interview request from The Post.

The Massachusetts incident is one example of the way President Trump’s signature phrase — Make America Great Again — has become a flashpoint in American daily life.

This week, a 19-year-old man in New Jersey was arrested and charged with assault and harassment after authorities say he tried to grab a MAGA hat off the head of an 81-year-old man outside a grocery store. The teen threw the older man to the ground and tipped over his shopping cart, police said.

A California high school student was banned from wearing her MAGA hat on campus and is now challenging her school district in court, alleging that the decision violates her First Amendment rights.

Most notably, the red MAGA symbol was part of a national debate about a confrontation at the National Mall in Washington between a Native American man and a Kentucky high school student who was wearing such a hat.