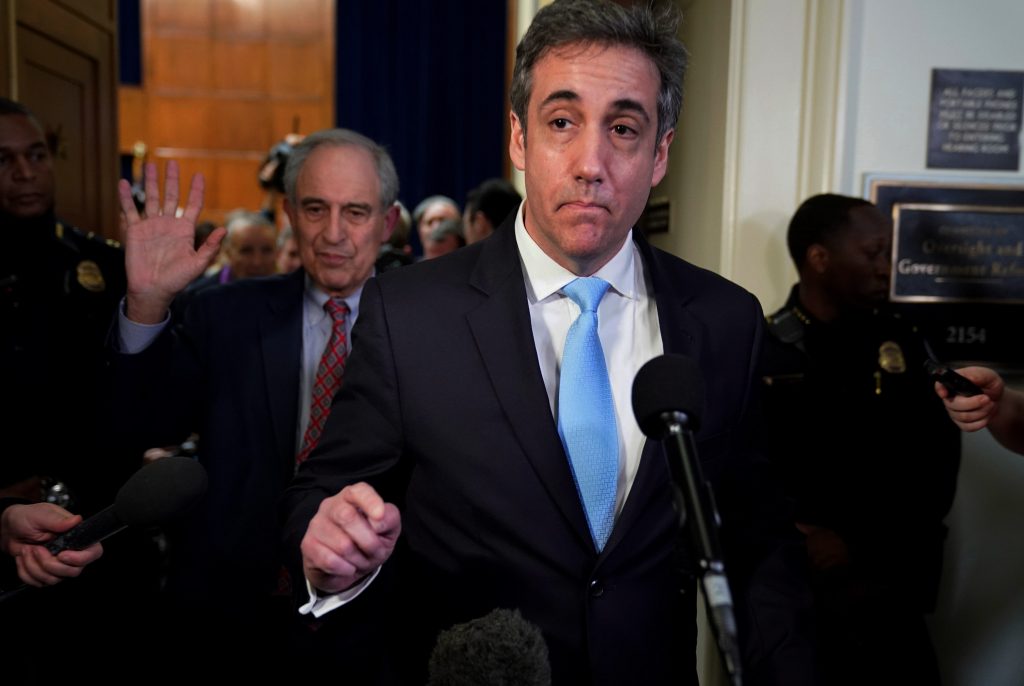 President Donald Trump’s former personal lawyer Michael Cohen will talk behind closed doors on Thursday to a congressional panel investigating Russia’s interference in the 2016 election, capping an explosive week of testimony in which he leveled new allegations of wrongdoing at his former boss.

In his third and final Capitol Hill session this week, Cohen will testify, starting at 9:30 a.m. and going all day, to the House Intelligence Committee. It has been probing Russian election meddling and any collusion within the Trump campaign.

It will follow dramatic public testimony by Cohen on Wednesday before the House Oversight Committee, in which the one-time “fixer” for Trump accused the president of breaking the law while in office and said for the first time that Trump knew in advance about a WikiLeaks dump of stolen emails that hurt his 2016 election rival Hillary Clinton.

As he did before the Senate Intelligence Committee on Tuesday, Cohen is expected to apologize for lying to Congress in 2017. That was when he submitted a statement saying efforts to build a Trump Tower in Moscow had ceased by January 2016. In fact, the talks stretched to June 2016. Cohen was sentenced to three years in prison for that lie and other crimes.

Democratic House Intelligence Committee Chairman Adam Schiff said in a tweet on Wednesday that he planned to dig into the Trump Moscow project, the revelations about Wikileaks and any White House role in Cohen’s prior false statements.

“Today Cohen provided the American public with a firsthand account of serious misconduct by Trump & those around him,” Schiff said. “Tomorrow we’ll examine in depth many of those topics.”

At Wednesday’s hearing Cohen said Trump never explicitly told him to lie to Congress about the Moscow skyscraper negotiations. But Cohen said he believed he was following implicit directions to minimize their efforts on the tower.

Cohen told the House Oversight Committee he had no direct evidence that Trump or his campaign colluded with Moscow during the election campaign, but that he had suspicions that something untoward had occurred.

Possible collusion is a key theme of Special Counsel Robert Mueller’s Russia investigation, which has dogged the president during his first two years in office. Trump has repeatedly denied the allegation, as has the Kremlin.