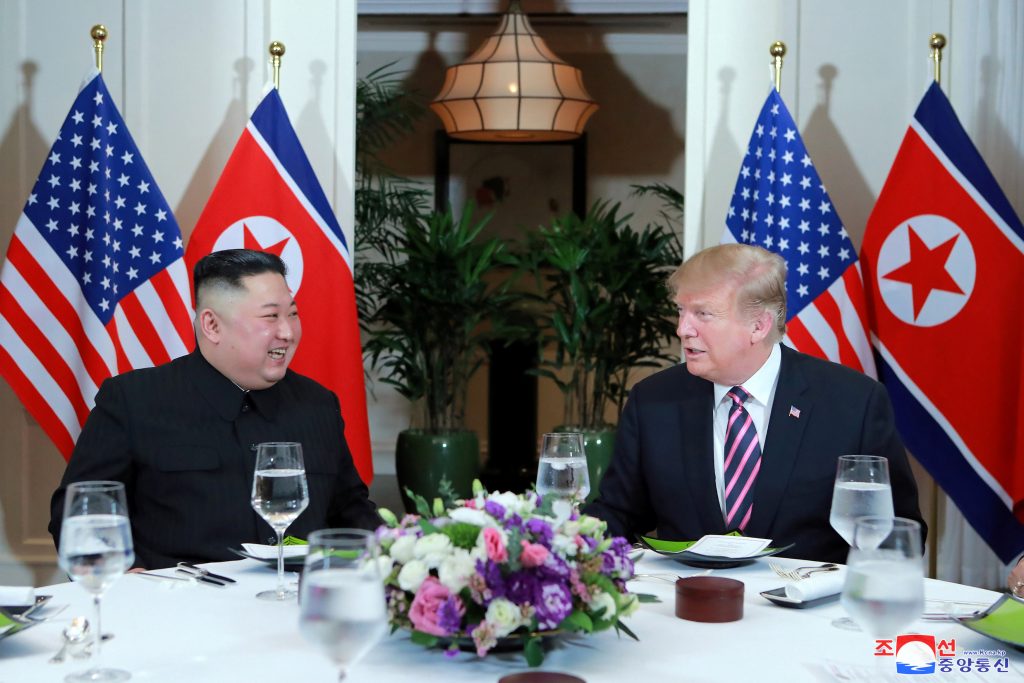 President Donald Trump and North Korean leader Kim Jong Un will hold another day of talks at their second summit in eight months on Thursday, after swapping compliments at a dinner but giving no sign of progress on the key issue of denuclearization.

President Trump hailed “a very special relationship” when he met Kim Jong Un in the Vietnamese capital of Hanoi on Wednesday and said he was satisfied with the pace of talks, despite some criticism they were not moving quickly enough.

“Great meetings” and a “Very good dialogue,” Trump said on Twitter after dinner with Kim at the French-colonial-era Metropole hotel, while the White House said the two planned to sign a “joint agreement” after further talks on Thursday.

The White House has given no indication of what the signing ceremony might involve, although the two sides’ discussions have included the possibility of a political statement to declare the 1950-53 Korean War over, which some critics see as premature.

U.S. concessions could include opening liaison offices or clearing the way for inter-Korean projects, but critics say Trump risks squandering vital leverage if he gives away too much, too quickly.

The Hanoi summit was Trump’s second with Kim since an inconclusive meeting in Singapore in June that produced much fanfare but little substance and there had been little sign of concrete progress since.

Trump has sought a big win by trying to persuade North Korea to give up its nuclear weapons in exchange for promises of peace and development, a foreign policy goal that has confounded multiple predecessors.

Trump told Kim on Wednesday he felt the first summit was “very successful”. “Some people would like to see it go quicker; I’m satisfied; you’re satisfied, we want to be happy with what we’re doing.”

The leaders exchanged views at dinner with the aim of achieving comprehensive and ground-breaking results from their summit, state news agency KCNA said on Thursday.

“Sincere and in-depth views were exchanged to bring about a comprehensive and groundbreaking outcome,” it said.

TRUMP SAYS NOT WALKING BACK

Asked by a reporter if he was “walking back” on denuclearization demands, Trump said, “No”.

On Thursday, the two leaders have a series of meetings scheduled at the Metropole, beginning with another one-on-one session lasting 45 minutes, the White House said.

Asked if he would declare a formal end to the Korean War, which concluded with an armistice, rather than a peace treaty that North Korea has long sought, Trump said on Wednesday: “We’ll see.”

Kim said on Wednesday the leaders had overcome obstacles to meet a second time and praised Trump for his “courageous decision” to begin a dialogue, adding that he was “confident that there will be an excellent outcome that everyone welcomes”.

Trump indicated a more flexible stance in the run-up to Hanoi, saying he was in no rush as long as North Korea, which has not tested a nuclear weapon or intercontinental ballistic missile since 2017, maintained that freeze.

U.S. intelligence officials have said there is no sign North Korea will give up its entire arsenal of nuclear weapons, which Kim’s ruling family sees as vital to its survival, and analysts say Pyongyang is unlikely to commit to significant steps without an easing of punishing U.S.-led sanctions.

Trump has appeared to be betting on his personal relationship with Kim, and the economic incentive after 70 years of hostility between their countries.

“Vietnam is thriving like few places on earth. North Korea would be the same, and very quickly, if it would denuclearize,” President Trump said on Twitter ahead of the meeting.