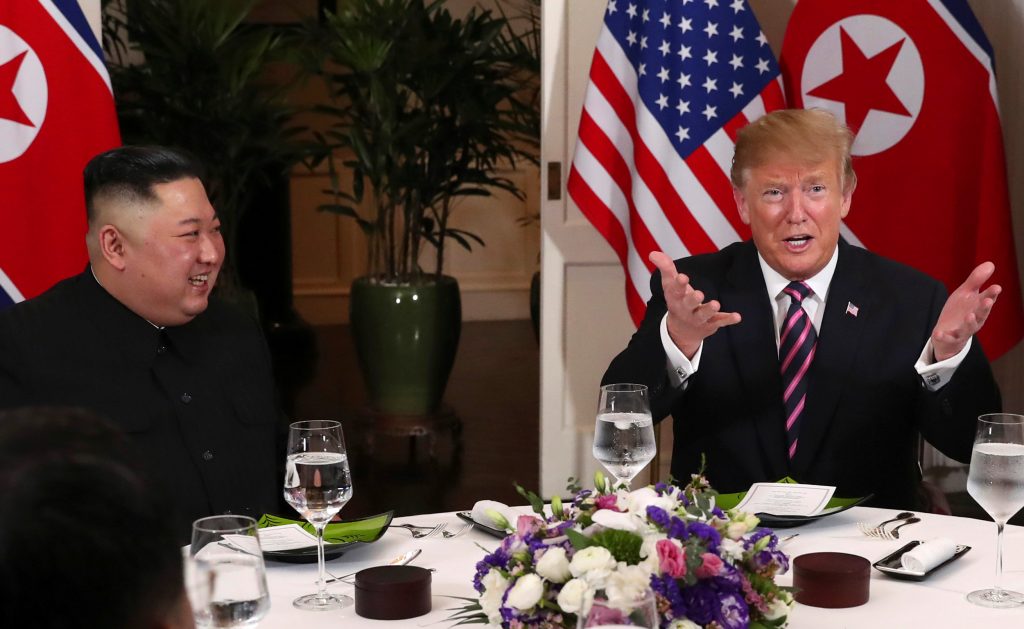 North Korean leader Kim Jong Un and President Donald Trump met in Vietnam on Wednesday for a second summit that the United States hopes will persuade North Korea to give up its nuclear weapons in exchange for promises of peace and development.

Kim and Trump shook hands and smiled briefly in front of a row of their national flags at the Metropole hotel in the Vietnamese capital, Hanoi, before heading to dinner together.

Trump told reporters he thought the talks would be very successful, and asked if he was “walking back” on denuclearization, said “no.”

At their historic first summit in Singapore last June, Trump and Kim pledged to work toward denuclearization and permanent peace on the Korean peninsula but little progress has been made.

Kim said they had overcome obstacles to hold their second summit and praised Trump for his “courageous decision” to begin a dialogue.

“Now that we’re meeting here again like this, I’m confident that there will be an excellent outcome that everyone welcomes, and I’ll do my best to make it happen,” Kim said.

On Thursday, the two leaders will hold a series of meetings, the White House said. The venue has not been announced.

“We’re going to have a very busy day tomorrow … Probably a very quick dinner,” said a smiling, relaxed looking Trump, seated beside Kim at a round table with the other four officials and two interpreters.

Trump and Kim‘s Singapore summit, the first meeting between a sitting U.S. president and a North Korean leader, ended with great fanfare but little substance over how to dismantle North Korea’s nuclear weapons and ballistic missiles.

In the run-up to this summit, Trump has indicated a more flexible stance, saying he was in no rush to secure North Korea’s denuclearization. He repeated that on Wednesday, saying while some people believed the talks should be moving more quickly, he was satisfied.

Trump has held out the prospect of easing sanctions if North Korea does something “meaningful.”

Some critics have said Trump appeared to be wavering on a long-standing U.S. demand for complete and irreversible denuclearization by North Korea, and risked squandering leverage if he gave away too much, too quickly.

Asked if he would declare a formal end to the Korean War, which North Korea has long called for, Trump said: “We’ll see.”

North and South Korea have been technically at war since their 1950-53 conflict, with the Americans backing the South, ended in a truce, not a treaty.