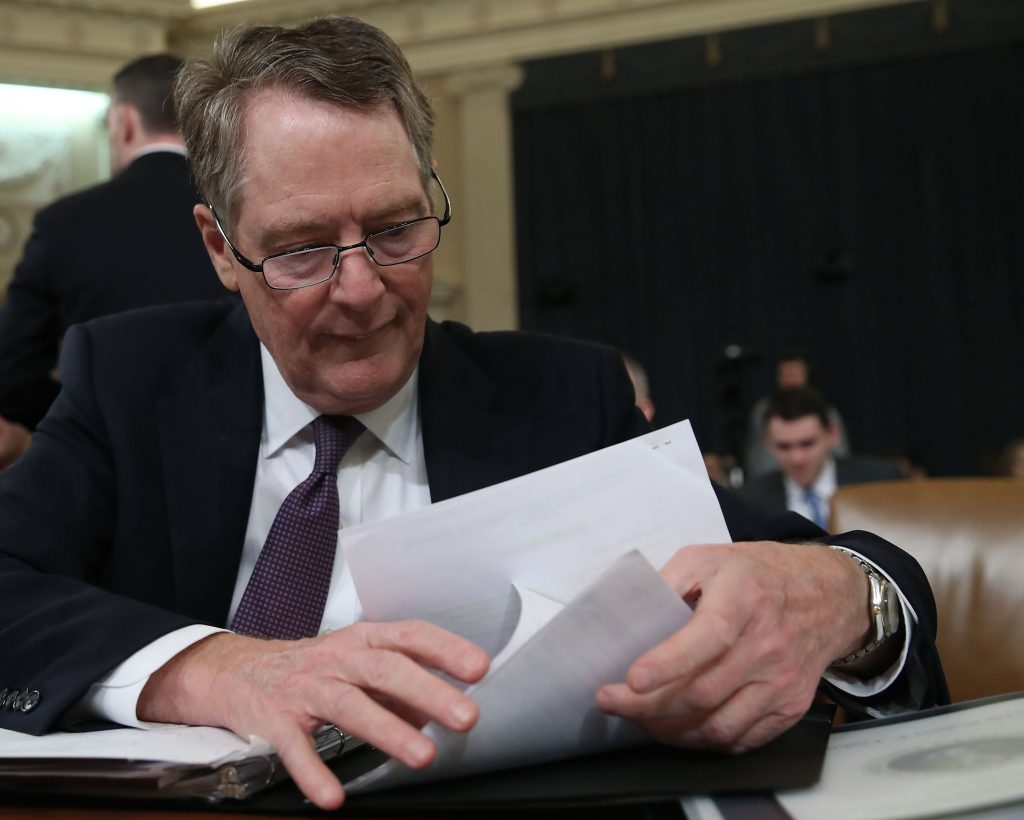 Highlighting the bipartisan pressure on President Donald Trump in his trade dealings with China, lawmakers challenged Trump’s top trade official Wednesday about the president’s tactics on tariffs and his authority to enact an agreement reached with China without congressional approval.

During a House Ways and Means Committee hearing, U.S. Trade Representative Robert Lighthizer said that the U.S. side is “making real progress” in talks with China, and he insisted that President Trump had the executive power to implement a final deal on his own.

“We have no intention of submitting” it to Congress, Lighthizer told Rep. Lloyd Doggett, D-Texas, who took exception to that plan.

While there is bipartisan support for the administration’s efforts to halt China’s unfair trade practices, lawmakers have been divided about the increasing authority seized by the president on matters of trade. Some have expressed concerns about Trump’s aggressive and shifting use of tariffs, while others have questioned the president’s resoluteness on his trade goals.

Lighthizer defended Trump’s tariff strategy, saying that it had provided leverage to confront the Chinese as never before on its state-run discriminatory practices, including appropriating U.S. intellectual property and forcing firms to give up their trade secrets.

Without revealing specifics, Lighthizer indicated that the administration was committed to securing major concessions from Beijing that are “specific, measurable and enforceable” by all levels of the Chinese government.

Lighthizer’s appearance on the Hill came just three days after the conclusion of the latest round of high-level talks with the Chinese. President Trump tweeted Sunday that U.S. negotiators made “substantial progress … on important structural issues,” and announced he was putting on hold indefinitely his plan to escalate tariffs if no deal was reached by Friday.

Trump said that he expected to meet with China President Xi Jinping to conclude an agreement. But neither side provided details, fueling speculation that Trump may be so eager to cut a deal with China that he was prepared to act against the advice of his most trusted strategist on trade and walk away with only modest gains for the United States.

On Wednesday, Lighthizer pushed back against that thinking. Even as he has advocated applying tough pressure on Beijing, Lighthizer’s remarks sought to dispel views of growing daylight between him and the president.

Yet analysts and those close to the administration say it is difficult to know what Trump’s endgame is with China. Although Trump has long talked tough on trade to the cheers of his working-class base of supporters, more recently he has appeared impatient about the pace of progress and has spoken about how he and Xi will have to get together to close a deal, “probably” next month at Trump’s Mar-a-Lago estate in Florida, he said.

In the Oval Office on Friday, Trump publicly chided Lighthizer in front of China’s trade delegation, complaining that he did not like the fact that Lighthizer was working on a memorandum of understanding with China, a common deal that is short of a formal binding agreement. Trump insisted that the two sides strike a contract, and Lighthizer quickly backed down and said he would seek a “trade agreement,” which may or may not require congressional approval.

At the same time, Trump has shown little appetite for following through on his threat to raise tariffs on $200 billion of Chinese imports from 10 percent to 25 percent. Many economists and business analysts say such a hike in duties would likely be met with retaliation from the Chinese, escalating the trade war and risking a severe hit to investors, U.S. farmers and other key political constituents that are hurting after both sides imposed tariff increases last year.

Muddling the outlook further, Trump suggested he could cut some kind of arrangement on Chinese telecom giant Huawei, which is facing charges of violating U.S. sanctions on Iran, as part of a final trade deal with China. Trump may see Huawei’s vulnerability as a bargaining chip, but there are legal processes involved in that case. Lighthizer and other Trump administration officials previously have stated that Huawei’s problems are a separate matter unrelated to the trade negotiations.

Lawmakers on Wednesday frowned on the possibility of President Trump giving leniency to Huawei in exchange for concessions and a final trade deal. Lighthizer declined to comment on that prospect, saying such legal processes were beyond his expertise and purview.