Community Harav Shlomo Machpud at Shiur on Hilchos Shechitah: ‘Those Who Fight Against Shechitah Will Be Lost’
Community 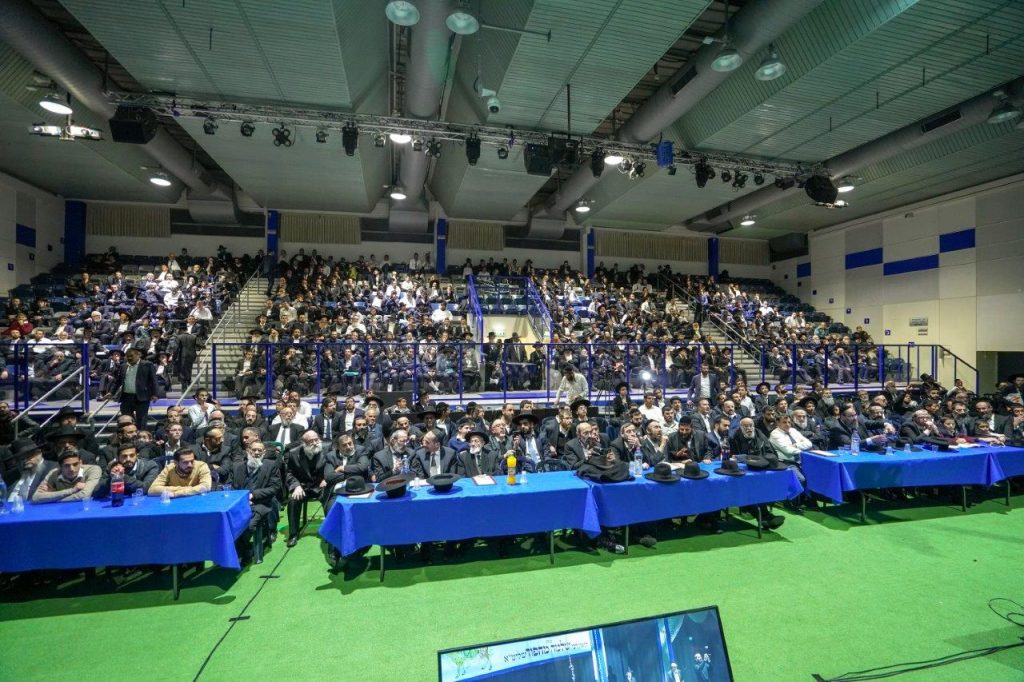 A crowd of 800 avreichim, Rabbanim, Maggidei Shiur, shochtim and menakrim participated this past Motzoei Shabbos in a comprehensive yet concise lecture on the laws of kashrus – the current topic in the Daf Yomi in Maseches Chulin – delivered by Harav Shlomo Machpud, sponsored by the Bnei Brak municipality and under veterinarian supervision, held at the Masuot Hall in Bnei Brak.

Harav Benayahu Machpud, who is currently at the head of the Yoreh De’ah beis din’s shechitah system both in Israel and abroad, and who closely assists his father, the Gaavad, presented the main rules of shechitah, the examination of the knives, treifos, chelev, and more. He emphasized the need for the shochet u’vodek to acquire practical experience beyond his theoretical halachic training, “because hearing is nothing like seeing.” Only practical experience will train him to pick up on problems that may not immediately seem relevant to shechitah. For example, Harav Machpud mentioned that in some slaughterhouses abroad, the workers who salt the meat generally take a break at a set time each day. If the mashgiach supervising the salting does not notice that the workers have gone out to their break before salting the entire piece of meat on all sides, this can pose a major kashrus problem even if they continue to salt that same piece of meat after they return from their break.

After his son’s introduction, Harav Shlomo Machpud took the podium and, for two hours and using fascinating visual aids, provided clear, concise explanations of the various parts of an animal, the chelevim, the krumim which are part of the prohibition against eating chelev, and the forbidden sciatic nerve running down the leg. The parts were placed on the table before him one by one, where they were skillfully cut by his students and presented to the audience to enable them to get a better grasp of the material and to truly understand his explanations. Harav Machpud even surprised the audience by presenting them with a ben pekuah – a rare phenomenon that comes with its own set of unique halachos.

“On behalf of all those who are currently studying this topic, we would like to present the clear halachah. We strongly protest against those who are fighting against Jewish shechitah which has been passed down from generation to generation. Unfortunately, the war against Jewish shechitah is not only coming from distant gentiles; there are people even here in Eretz Yisrael, empty, wayward Jews whom we see participating in the demonstrations against us. Throughout the generations, the Jewish people have always been willing to give up their lives for kosher shechitah – which also happens to be the most humane and best way [to slaughter], as Dr. Yisrael Meir Levinger, member of the Conference of European Rabbis, has published and proven in his book, Shechitah and Tzaar Baalei Chaim. They are the foolish ones who are acting cruelly with their way of killing the animals, using electric shocks and hammers. They have not learned from our Torah what tzaar baalei chaim is. Blessed is Hashem, Who has separated us from the wayward. They will be lost, while Hashem’s nation will continue living in accordance with our holy Torah, with courage and with no compromises.”

On behalf of all those present, Rabbi Machpud thanked the Bnei Brak municipality, Mayor Rabbi Avraham Rubinstein, Deputy Mayor Rabbi Eliyahu Dadon, and municipality member and manager of the Culture Department Rabbi Yaakov Zecharyahu, all of whom greatly assisted and enabled this large-scale lecture for Daf Yomi learners.