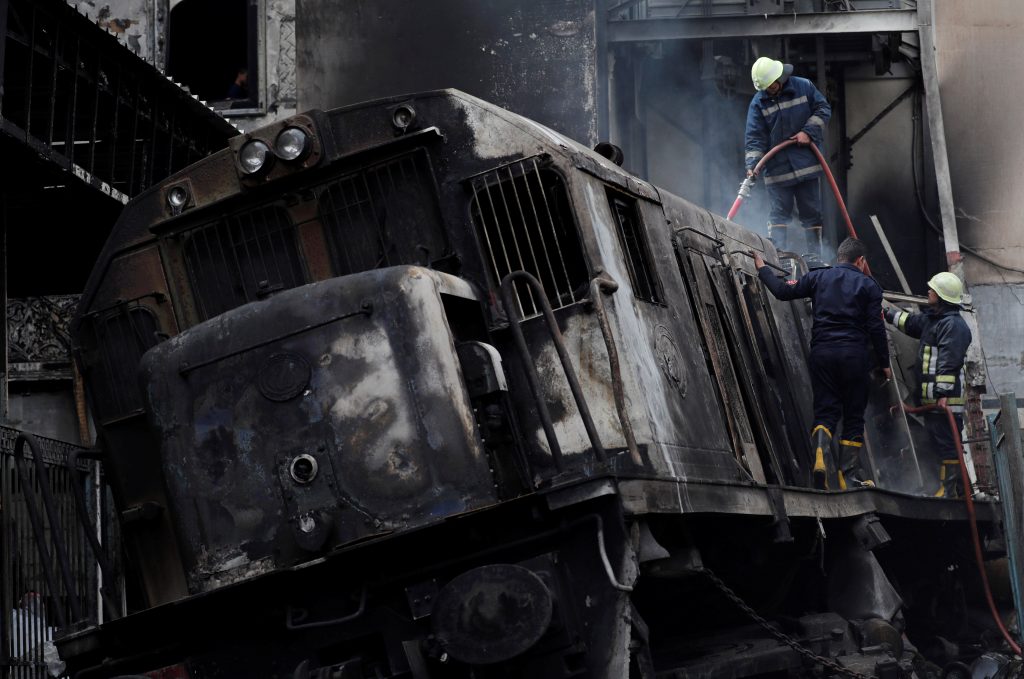 At least 25 people were killed and 50 injured when a locomotive smashed into a barrier at Cairo’s main train station on Wednesday, causing an explosion and a fire, state media and witnesses said.

The fire sent black smoke billowing above the Ramses station in the center of the Egyptian capital. Inside the station, the train’s blackened engine could be seen tilted to one side next to a platform.

Security sources said there was no indication that the crash was deliberate.

Bystander Mina Ghaly added, “I was standing on the platform and I saw the train speed into the barrier … Everyone started running but a lot of people died after the locomotive exploded.

“I saw at least nine corpses lying on the ground, charred.”

Ahmed Abdeltawab said the platform had been crowded with people waiting for another train.

“The fire overwhelmed them and they ran while they were on fire until they fell meters from the incident,” he said. “The scene was terrifying.”

Several witnesses said they had seen fire coming out of the train’s engine before it crashed, causing an explosion and fires inside the station.

Prime Minister Mostafa Madbouly announced from the station that the incident would be investigated and anyone found responsible would be held accountable.

Egypt has one of the oldest and largest rail networks in the region and accidents causing casualties have been common.

Egyptians have long complained that successive governments have failed to enforce basic safety standards for the railways.

Student Ali Ramadan said he had suffered burns and injured his foot when he ran into a concrete bench on the crowded platform. “I don’t know when these train accidents will end … They told us they got millions of dollars’ worth of new locomotives and trains, and people are still dying because of train accidents.”

The Transport Ministry suspended all train arrivals and departures at the station.