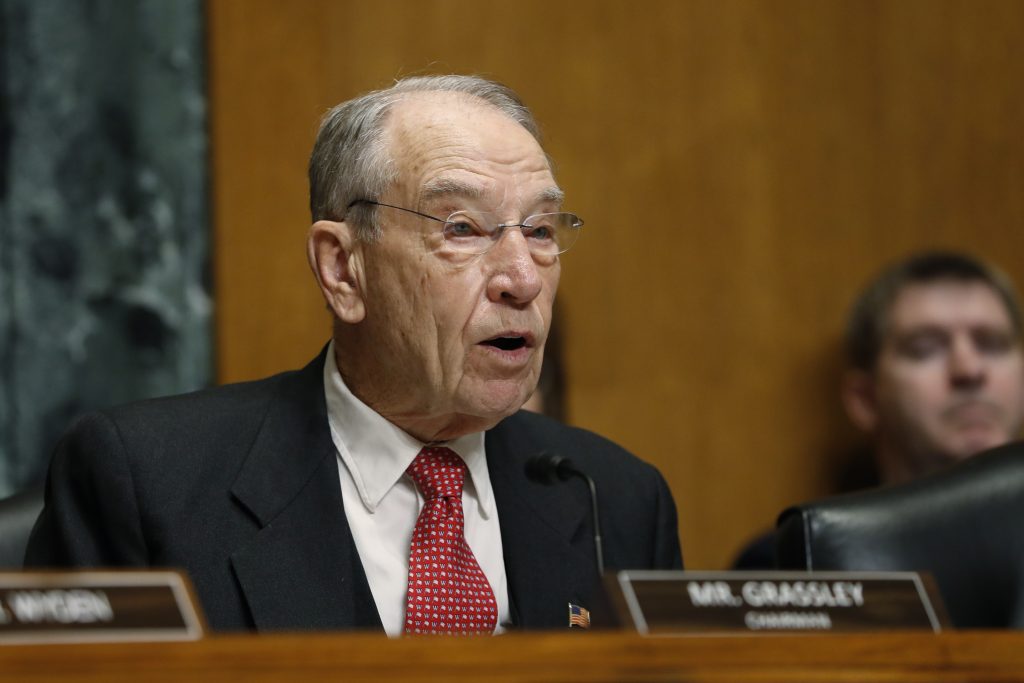 Senators grilled CEOs of seven major drug companies on Tuesday over high prescription drug prices that are a drain on Medicare and Medicaid and a burden to millions of Americans. The extraordinary public accounting was a sign that Congress and the White House are moving toward legislation this year to curb costs.

As the Finance Committee hearing got underway, Chairman Charles Grassley (R-Iowa) pointedly reminded the executives that it is a crime to provide false testimony to Congress. Some of the companies initially had sought a private meeting to explain their pricing policies, but lawmakers refused and insisted the CEOs appear in public or risk subpoenas.

“Without a doubt, drug pricing is a complex issue,” Grassley said in his prepared opening statement. “But I think we should all be asking: Should it be so complex? We cannot allow anyone to hide behind the current complexities to shield the true cost of a drug.”

Ranking Democrat Ron Wyden of Oregon said in his prepared statement, “You pharma executives are here because the way you do business is unacceptable and unsustainable. Ten companies accounted for half of all profits in the health-care sector last fall. Nine of those ten were drug manufacturers.”

In statements submitted to the committee, the CEOs said drug development is a risky and costly undertaking, and that prices reflect investment in research and development.

“We recognize that the current state of drug pricing in the U.S. health-care system is not sustainable and that patients are facing increasingly high out-of-pocket costs,” AstraZeneca CEO Pascal Soriot said in prepared remarks. “We believe that these issues must be addressed urgently, and we hope to be a constructive partner in finding solutions.”

Tuesday’s hearing marks the first time lawmakers have called the industry’s top executives to account for rising prices. Previous congressional hearings have focused on bad actors who briefly captured national attention, such as former pharma executive Martin Shkreli, who hiked the price of a decades-old infection treatment by more than 5,000 percent.

Besides AstraZeneca, which makes the cholesterol drug Crestor, other companies represented at the hearing were AbbVie, maker of Humira for rheumatoid arthritis and other immune-system conditions; Bristol-Myers Squibb, maker of the blood thinner Eliquis; Johnson & Johnson, maker of Xarelto to prevent blood clots; Merck, maker of Januvia to treat diabetes; Pfizer, maker of Lyrica for nerve pain; and Sanofi, a leading manufacturer of insulin, including the Lantus brand. The drugmakers have collected tens of billions of dollars from government programs in recent years.

Grassley said that he’s not interested in “scapegoating” and that Congress intends to respond to the drug price problem in a “measured and effective” way.

Democrats say it’s time for Medicare to leverage its purchasing power and directly negotiate prices with the industry, a step most Republicans oppose.

The pharmaceutical industry is one of the most powerful lobbies in Washington, but Tuesday’s hearing seemed to mark a change in direction. President Donald Trump’s recurring blasts at drugmakers appear to be closer to finding a pathway to legislation.

Drugmakers pointed a finger at other industry players, including middlemen called pharmacy benefit managers, who bargain on behalf of insurers and employers. Rebates paid to middlemen help assure favorable treatment for a medication on an insurer’s list of covered drugs and help keep premiums lower.

But the rebates are not passed on to consumers who use the particular medication, and they can face high copays based on the drug’s list price, not the discounted one. Experts say rebates can also create an incentive to keep raising list prices.

While list prices are going up, some of the CEOs said the net prices their companies receive after discounts and rebates are stable or sometimes declining.

Grassley seemed skeptical of the drugmakers’ argument that high list prices are not really part of the problem.

“For a patient taking a drug that has no competition, the list price is meaningful,” he said.

The companies offered solutions of their own, some of which echo proposals from the administration or by lawmakers. Among them:

— Allow patients to share in rebates when they buy their medication, a policy proposed by the Trump administration.

— Place a hard limit on cost-sharing and copays for Medicare beneficiaries in the popular Part D prescription program, a change supported by Wyden.

— Make greater use of value-based contracts that tie payments for a medication to how well it delivers results.

— Promote the introduction of lower-cost generics and biosimilars, competition that brand manufacturers are often accused of impeding.

Drug costs are squeezing Americans in a number of ways: New medicines for cancer and other diseases often launch with prices exceeding $100,000 per year even as employers are shifting more pharmacy costs onto workers. Less expensive drugs for common ailments like diabetes and asthma often see price hikes of around 10 percent annually. Meanwhile some drugmakers have been buying up once-cheap medicines and hiking prices by 1,000 percent or more.

The U.S. system for pricing drugs is notoriously complex. An expert panel assembled by the National Academy of Medicine in 2017 concluded it is “extremely difficult, if not impossible, for outsiders to ‘follow the money.'”

Critics say this lack of transparency has created a perverse system in which drugmakers, pharmacy benefit managers and other health care providers all benefit from rising prices.

The drug industry’s concerns about government intervention are on the rise. Drugmakers’ top lobbying arm, the Pharmaceutical Research and Manufacturers of America, spent a record $27.9 million last year to sway federal decision makers, according to records tallied by the nonprofit Center for Responsive Politics. That surpassed the group’s previous biggest spending total of $27.1 million during the 2009 congressional battle over the Affordable Care Act.