World Reports: May to Rule Out No-Deal Brexit to Stave Off Rebellion
World 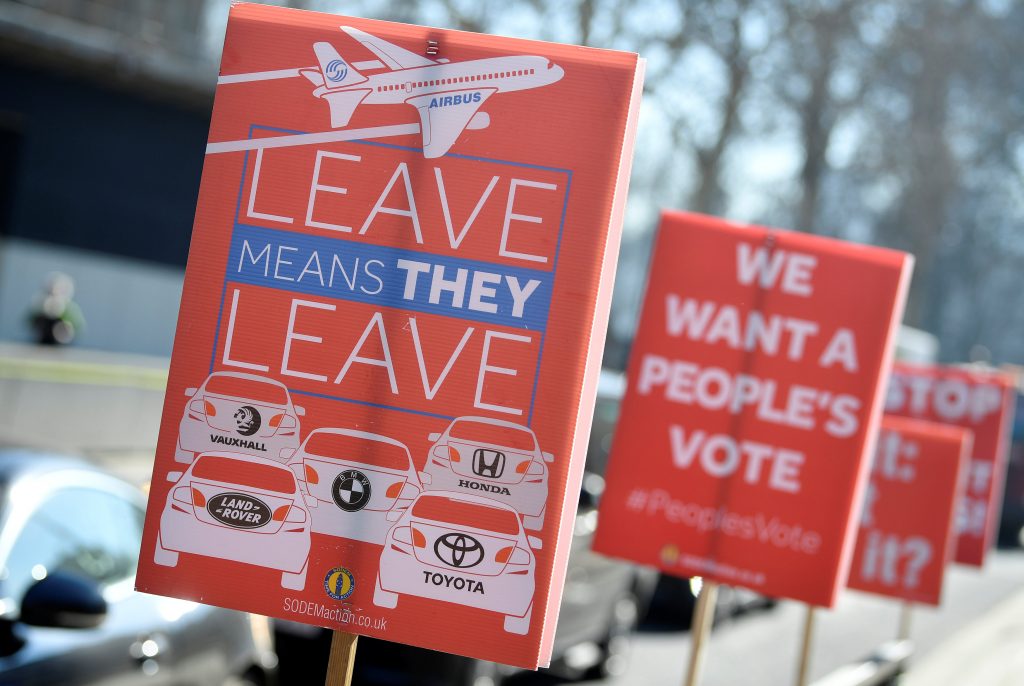 British Prime Minister Theresa May will on Tuesday propose formally ruling out a no-deal Brexit in a bid to avoid a rebellion by lawmakers, who are threatening to grab control of the divorce process, The Sun and Daily Mail newspapers reported.

If May does rule out a no-deal, it would mark one of the biggest turning points in the United Kingdom’s labyrinthine Brexit crisis since the shock 2016 referendum vote to leave the European Union.

After the British Parliament voted 432-202 against her divorce deal in January, the worst defeat for a government in modern British history, May has tried to use the threat of a potentially disorderly no-deal Brexit to get concessions out of the EU.

But British lawmakers, worried that May risks thrusting the world’s fifth-largest economy into an economic crisis, have threatened to usurp control of Brexit from the government in a series of votes on Wednesday.

May on Tuesday will propose to her Cabinet of senior ministers that she formally rules out a no-deal Brexit, opening the door to a delay of weeks or months to the March 29 exit date, The Sun newspaper reported.

The Daily Mail newspaper said May is ready to rule out a no-deal Brexit after as many as 15 ministers said they were ready to resign. A spokesman for her Downing Street office declined to comment on the reports.

Reuters reported on Monday that May’s government was looking at different options, including a possible delay.

A delay would increase the chances of a reversal of Brexit, especially as the opposition Labour Party is tilting toward supporting another referendum, though much would depend on the extent of the delay.

While businesses have increasingly warned of the risk of a chaotic EU exit and its impact on trade and investment, any delay would be anathema to hardline pro-Brexit members of May’s Conservative Party.

It was not immediately clear how explicitly May would rule out a no-deal. She is due to chair a Cabinet meeting and then update Parliament Tuesday afternoon.

Her de-facto deputy, David Lidington, told BBC radio he would not disclose what the Cabinet would be discussing. When repeatedly asked if May was going to delay, Lidington did not address the questions directly.

The 2016 referendum, in which 17.4 million voters backed leaving and 16.1 million backed staying, showed a country divided about much more than the EU, and has fueled soul-searching about everything from secession and immigration to capitalism and modern Britishness.

The crisis has left allies and investors puzzled by a country that was for decades touted as a confident pillar of Western economic and political stability.

With just a month to go until Brexit, the ultimate outcome is unclear, with scenarios ranging from a last-minute deal to another referendum that May has warned would reopen the divisions of the referendum or even scupper Brexit.

Both of Britain’s main parties are under intense pressure to change course on Brexit, though both are officially committed to implementing the result of the referendum.

The opposition Labour Party said on Monday it would back calls for a second referendum on Brexit if Parliament rejects its alternative plan for leaving the EU.

But the tilt toward another referendum raises problems for Labour, many of whose traditional voters supported leaving the EU.

Labour’s Brexit spokesman Keir Starmer added an additional twist to the political chaos in London by saying that even if May’s deal was passed by March 12 it should face a public vote.

May wants to negotiate changes to the exit deal she agreed with the EU last year and has promised to bring it back for approval in Parliament by March 12 at the latest.