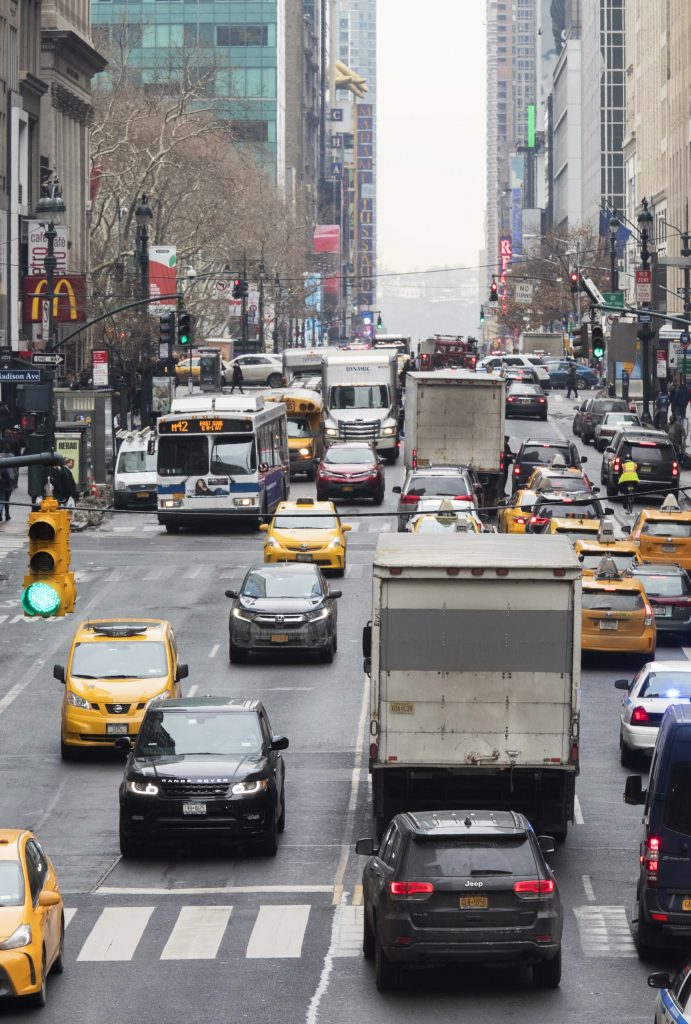 While the joint agreement doesn’t set a specific toll amount, it does lay out a process that could lead to new tolls on motorists driving south of 61st Street in 2021. The actual toll amount would be based on the financial needs of the Metropolitan Transportation Authority. Tolls would vary based on the time of day as a way to reduce gridlock.

The 10-point plan also calls for overhauling the administrative structure of the Metropolitan Transportation Authority, the unwieldy agency that oversees the city’s crumbling subway system. Additionally, the two Democrats say they want to use a portion of revenue from taxes on internet sales and recreational marijuana — if approved by lawmakers — to raise additional funding for transit repairs and upgrades.

The tolls are intended to raise billions of dollars for much-needed work to modernize the city’s subway and bus systems, while also discouraging vehicular traffic in the densest part of the nation’s largest city. Similar tolls are in place in London, Singapore and other international cities, but the much-debated idea has so far fallen flat in New York.

Cuomo wants lawmakers to approve the tolls as part of the state budget, which is due April 1. While the tolls have broad support in the Legislature, many lawmakers have demanded more details, including the actual amount motorists can expect to pay.

The governor argues that if new tolls aren’t approved, existing bus and subway fares will have to increase by 30 percent. Earlier estimates had projected tolls as high as $12, though officials say they don’t expect the final amount to be that high.

“We’ve tried to get it done for years and I believe this is the year to actually get it done,” Cuomo said on New York City public radio on Tuesday.

Supporters of the toll idea known as ‘congestion pricing’ — including transit advocates, environmental groups and business organizations in the city — hailed the agreement between the two frequent political rivals as a sign that the plan is gaining traction.

“When the governor and mayor put out a plan together, it means real momentum toward enacting congestion pricing to fix the subway,” said John Raskin, the executive director of the Riders Alliance, a transit advocacy organization. “Now we need the Senate and Assembly to do their part.”

Top lawmakers welcomed the agreement between the mayor and governor but stopped short of endorsing their framework, saying only that they would study the proposal closely.

“Clearly, there is a crucial need for a dedicated stream of revenue to fix the crumbling MTA,” Mike Murphy, a spokesman for Senate Leader Andrea Stewart-Cousins (D-Yonkers), said in a statement.

De Blasio was initially skeptical of congestion pricing, suggesting that higher taxes on wealthy earners might be a better way to raise money for transit. But on Tuesday he said in a statement that the most recent plan contains several improvements. He said he’s now convinced tolls must be a part of any plan to fix the city’s transit.

“Working New Yorkers struggle every day to get around our city,” he said. “We cannot let another year pass without action that makes people’s lives easier. This crisis runs deeper than ever before… The time to act is now.”

According to the plan, the toll amount would be announced “no later” than December 2020. The earliest the toll could be imposed would be in 2021.

FDR Drive, which runs on the eastern side of Manhattan, would be exempt from the tolls because of the number of motorists who use it to avoid central Manhattan. Emergency vehicles would also be exempt.