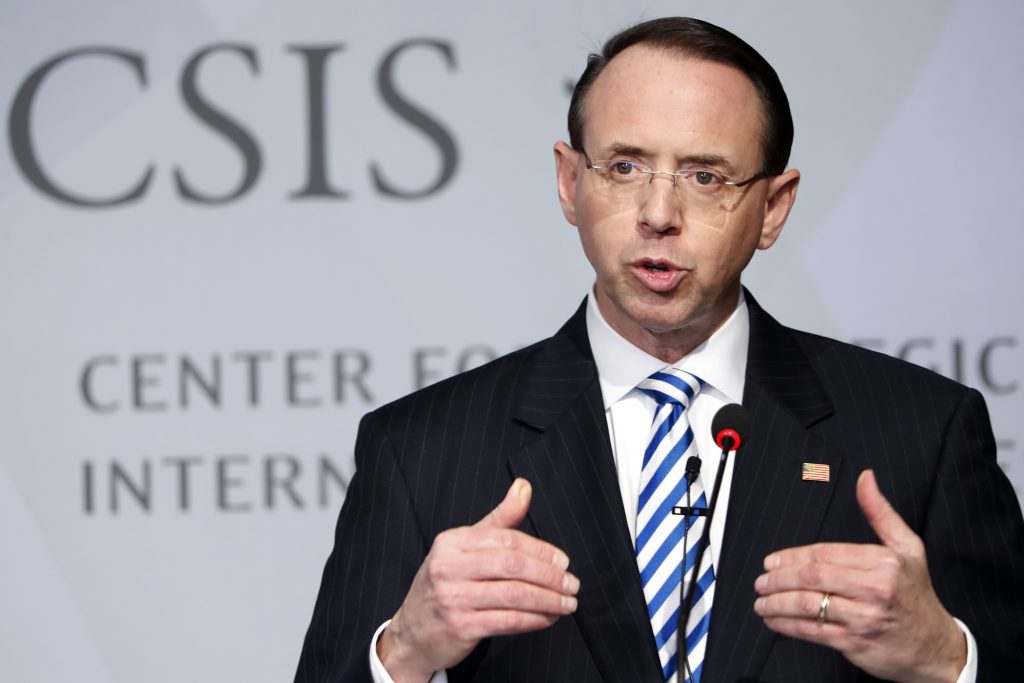 Deputy Attorney General Rod Rosenstein said Monday that he believes the Justice Department should not reveal information about people it does not charge with crimes, an ominous sign for those hoping the department will soon disclose the closely held details of special counsel Robert Mueller’s probe of President Donald Trump and his campaign.

Speaking at an event about the rule of law at the Center for Strategic & International Studies, Rosenstein said that in his time at the Justice Department, “The guidance I always gave my prosecutors and the agents that I worked with during my tenure on the front lines of law enforcement were if we aren’t prepared to prove our case beyond a reasonable doubt in court, then we have no business making allegations against American citizens.”

Though he asserted his comments were not about any particular case, he noted the issue was one “that we’ll be discussing nationally.”

For days, lawmakers and pundits in Washington have debated what should become public about Mueller’s probe once it ends. On Sunday, House Intelligence Committee Chairman Adam Schiff, D-Calif., said that Democrats plan to subpoena Mueller’s report and would go to court if necessary.

Rosenstein conceded there “may be legitimate reasons for making exceptions,” but he felt the Justice Department generally should be sensitive “to the rights of uncharged people.”

The comments seem to foreshadow what could be a grueling legal battle between Congress and the Justice Department over what information about Mueller’s work ultimately is released.

Lawmakers already are pressing for significant investigative documents to be handed over, and recent precedent might work to their benefit. After the FBI concluded its investigation into Hillary Clinton’s use of a private email server while she was secretary of state, then-FBI Director James Comey made public the reports of agents’ interviews with witnesses and gave public briefings to Congress.

Comey was widely criticized for that, including by Rosenstein, who wrote a memo that supported Comey’s firing because of how he handled the Clinton case.

The decision on how much to release about Mueller’s probe will ultimately fall to Attorney General William Barr, who vowed at his confirmation hearing to be as transparent as possible but notably declined to promise he would release Mueller’s report. Rosenstein’s view, though, is particularly important, as he appointed Mueller as special counsel in May 2017 and supervised much of his investigation. Rosenstein remains the No. 2 Justice Department official, though he expects to leave in mid-March. Mr. Trump has said he plans to nominate lawyer Jeffrey Rosen to replace him.

At the event Monday, Rosenstein said he believes that Americans will look back on this period in the Justice Department’s history with pride, and he notably singled out Mr. Trump as warranting recognition for that.

“The president will deserve credit for the folks he appointed to run the department,” Rosenstein said.