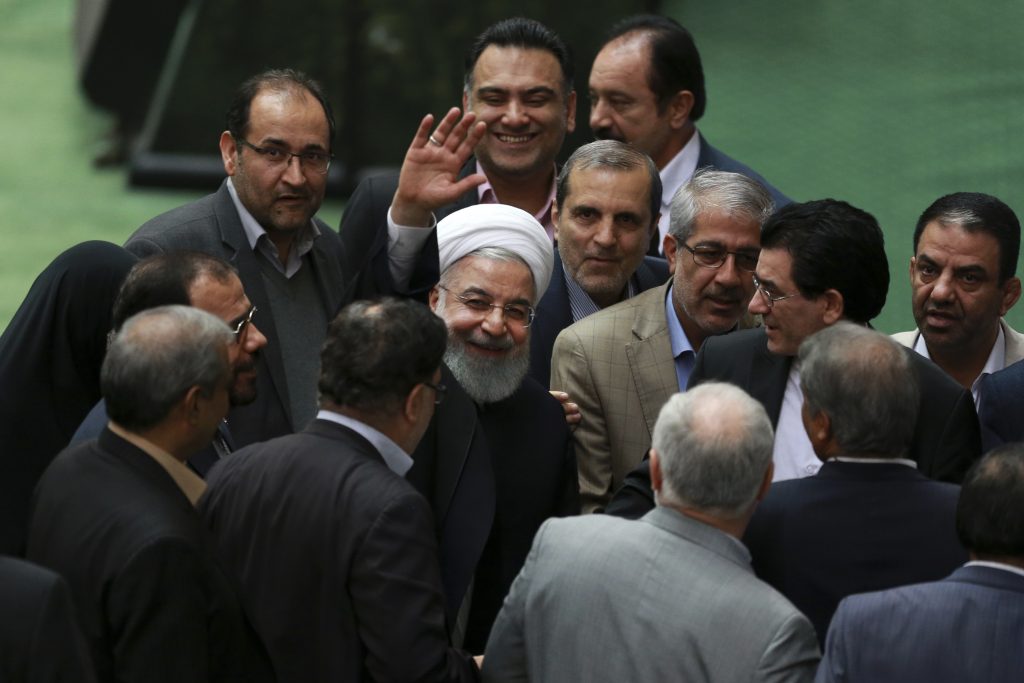 As Iran marked the 40th anniversary of its Islamic Revolution, a white-turbaned Shiite cleric at one commemoration targeted President Hassan Rouhani, a fellow clergyman, with this sign: “You who are the cause of inflation; we hope you won’t last until spring.”

Already lashed by criticism over his collapsing nuclear deal and renewed tensions with the U.S., the relatively moderate Rouhani faces anger from clerics, hard-line forces and an ever-growing disaffected public that now threatens his position.

Iranian presidents typically see their popularity erode during their second four-year terms, but analysts say Rouhani is particularly vulnerable because of the economic crisis assailing the country’s rial currency, which has hurt ordinary Iranians and emboldened critics to openly call for his ouster.

Though such a move has only happened once in the Islamic Republic’s four-decade history, the popular discontent heard on streets throughout Iran now could make it possible.

It’s been a long fall for Rouhani, who secured the 2015 nuclear deal after two years in office and won the praise of Iranians, who flooded the streets to celebrate it. Under the deal, Iran limited its enrichment of uranium in exchange for the lifting of economic sanctions.

But the benefits of the deal never reached much of the Iranian public. Even before President Donald Trump pulled America from the accord in May, uncertainty over its future caused the rial to crater, fueling sporadic, nationwide protests.

Now the rial is dropping again, down to 133,000 to $1. It had been 32,000 to the dollar at the time of the deal. On social media, hard-liners share price lists showing food staples like beans, rice and tomato paste rising as much as 238 percent.

Hassan Abbasi, a retired general in Iran’s hard-line Revolutionary Guard, which answers to Supreme Leader Ayatollah Ali Khamenei, gave a speech after Karaj saying he believed people will spit on Rouhani, Larijani and Zarif in the streets over the nuclear deal after they leave office. He said they are “shivering” over the accord’s collapse.

Tension between hard-liners and more moderate forces within Iran are nothing new. The Islamic Republic’s political structure muddles who wields power between paramilitary forces within the Guard and the country’s civilian government. Reformist President Mohammad Khatami faced similar pressures in his second term, which then gave way to hard-line populist President Mahmoud Ahmadinejad.

But Khatami didn’t face the same grinding economic pressure, or an American president like Donald Trump, whose administration has taken a maximalist approach toward pressuring Tehran. Analysts say that only further weakens Rouhani’s hand.

“You, Mr. President, have only 15 to 20 percent of the power” within Iran’s government, the pro-Rouhani daily newspaper Jomhouri Eslami said in a January editorial. “You cannot run the country with this amount of power and be accountable for all its difficulties and problems.”

Rouhani himself seemed to acknowledge the pressure he faces during a visit to the Iranian port city of Bandar Abbas on Monday.

“Presidential elections happen every four years,” he said. “When people voted for a particular viewpoint, all should go after that and support” it.

Nine hard-line lawmakers have put forward a measure to disqualify Rouhani as president. His dismissal would require two-thirds of Parliament’s 290 members, but there is a precedent. In 1981, Parliament disqualified the liberal Abolhassan Banisadr as president, and then Supreme Leader Ayatollah Ruhollah Khomeini dismissed him.

Iranian law also allows Rouhani to resign, and criminal charges could push him from his post. His brother, Hossein Fereidoun, is on trial over corruption charges that his supporters call politically motivated.

Mahmoud Vaezi, a spokesman for Rouhani, on Wednesday dismissed those pursuing impeachment as belonging to “a group in Parliament that opposes everything.” However, they aren’t the only source of pressure.

Reformists, those who want to change Iran’s political system from the inside, have grown increasingly disenchanted with Rouhani over his inability to end the house arrests of opposition leaders Mir Hossein Mousavi and Mahdi Karroubi. Rouhani ran for election in 2013 and 2017 promising to free the two leaders of the 2009 Green Movement.

Meanwhile, hard-line clerics have opposed his administration’s efforts to join international anti-money-laundering conventions, fearing that could cut off support to Lebanon’s Hezbollah terror group and others. State media, long controlled by hard-liners, has played up speeches by military officials and increasingly airs segments glorifying those who fought in the 1980s war in Iraq.

“When Rouhani will not be in power, people will choose his alternative,” said hard-line lawmaker and cleric Mojtaba Zolnouri, who signed onto the Rouhani impeachment effort. “Whoever people choose, we welcome.”

Rouhani’s four-year term runs until 2021. But Tehran-based political-economic analyst Saeed Leilaz echoed the sentiments of many in saying the next few weeks could prove crucial to the embattled president. Some have suggested even ending the position of president and returning to a parliamentary system.

“In the spring, parallel with intensifying pressures and problems, Rouhani may resign or the [government’s] structure may change,” he said.