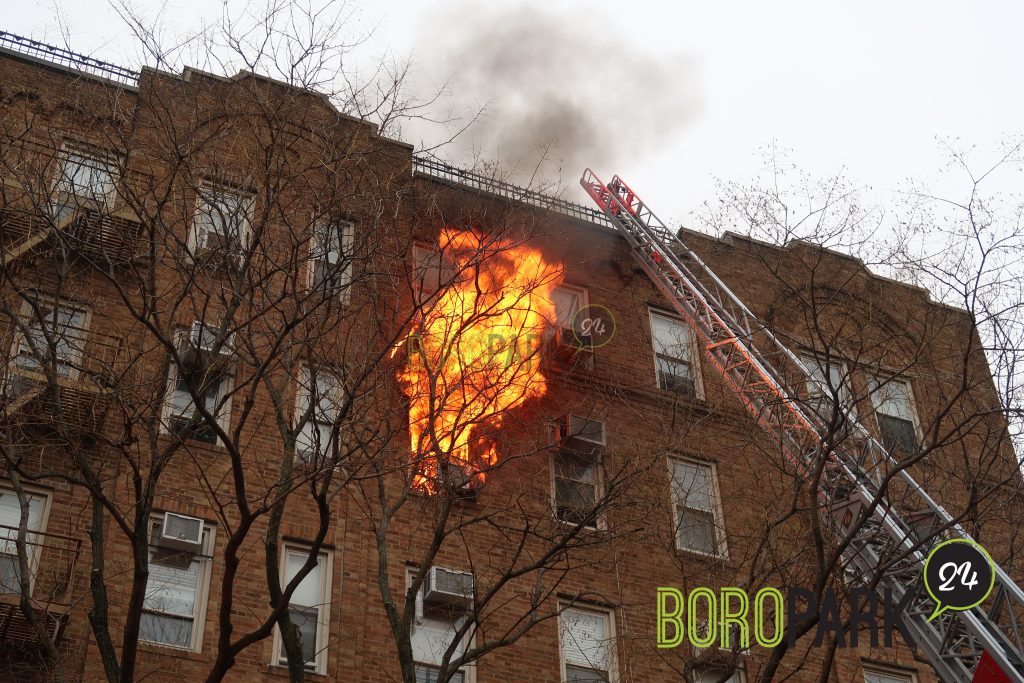 The fire, whose cause is yet to be determined, began around 3:45 p.m. in an apartment on the fifth floor of the building, located at 1451 52nd Street. The family living in that apartment was not home at the time, and smoke alarms went off, alerting all residents to leave.

Joshua Rubinstein, who lives on the third floor of the building’s other wing, told Hamodia he was home with his wife when the fire began.

“I was lying down, and heard the alarms go off, in the hall and in the apartment,” Rubinstein said. “People were knocking on doors, telling residents to get out, and not to use the elevators.” Rubinstein also called a relative who lives on the sixth floor of his wing to make sure they had left.

Several residents stopped off at the apartments of some elderly women, and carried them, in their wheelchairs, down the stairs.

“I was walking on the next block, when I saw black smoke,” a neighbor who asked to be identified only as Yaakov told Hamodia. “Just when the fire trucks came, some windows started popping, and that’s when flames started shooting out.”

The six-story building has a total of 65 apartments . At least two apartments, the one on the fifth floor of the building’s front side and the one above it, were destroyed in the fire. All the apartments on the lower floors, in the same line, suffered water damage. Units in the opposite wing were undamaged. At least one resident who lives in the same wing as the fire but on the back side said his apartment was undamaged.

A resident named Shalom who lives on the first floor, four floors directly below the apartment in which the fire started, said his apartment is uninhabitable, as it has serious water damage and smells from smoke. Shalom told Hamodia his wife and five children were home, and fled when the fire began. After they were outside, they briefly could not find their four-year old daughter; when they found her, she was wearing a woman’s coat.

“Some unknown woman saw that a young girl didn’t have a coat,” Shalom said, “so she must have taken off her coat and put it on my daughter.”

A source familiar with the investigation told Hamodia that while the cause of the fire has not yet been determined, it is believed to be accidental.