National Dallas Could Auction Off Its Robert E. Lee Statue After All
National 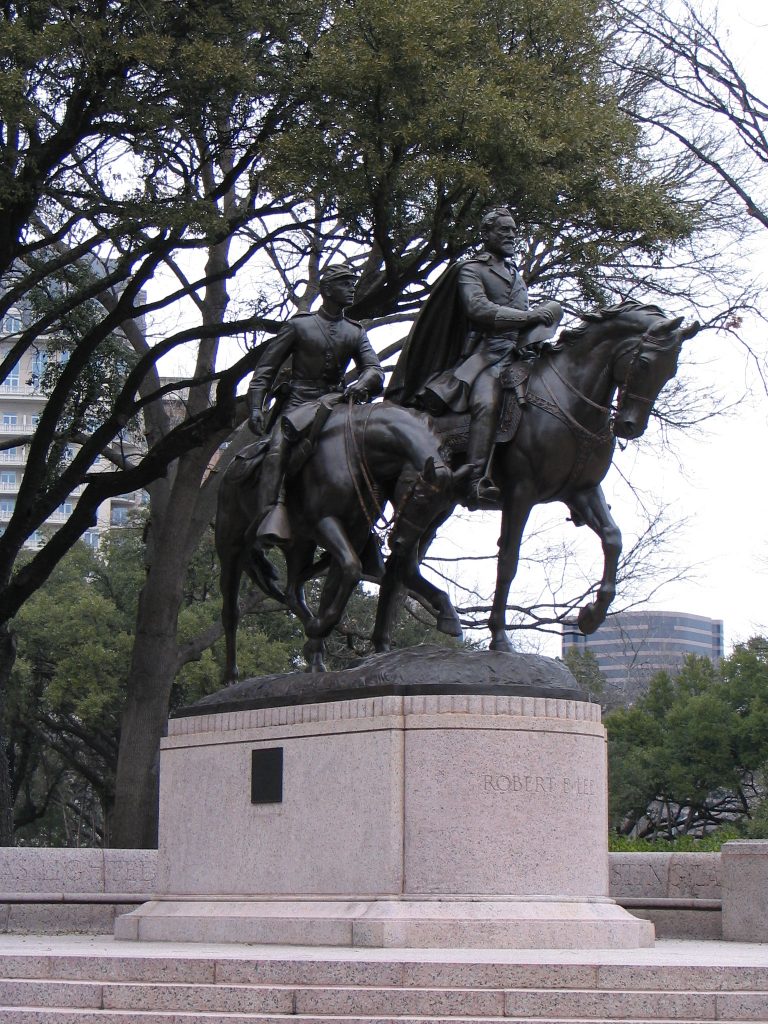 That revelation was at the bottom of a memo City Manager T.C. Broadnax sent to the council Friday night concerning the removal of the base upon which the Lee statue stood, which is believed to contain a time capsule; the disassembling and displacement of the Confederate War Memorial; and the vandalism that occurred at the monument last weekend.

As costs associated with the monument’s removal and protection pile up, Broadnax wrote city staff would begin to “solicit proposals from a fine auction house to sell the Lee monument” and bring a contract back to the City Council for a decision.

But the City Council decided last spring when 10 members of the Dallas City Council voted not to auction off Alexander Phimister Proctor’s 1935 sculpture “Robert E. Lee and Young Soldier.”

The vote came months after the September 2017 council vote to remove the statue from its longtime Oak Lawn overlook. Members of the Mayor’s Task Force on Confederate Monuments had expressed apprehension about selling the Lee statue, lest it fall into the wrong hands. But the council members offered little reason for their decision, at least publicly, because they had no open debate: Far North Dallas’ Sandy Greyson made a motion against hiring an auction house, and the council voted immediately in favor. The quick vote was in stark contrast to the lengthy, often contentious debate that had come earlier that day over the Confederate War Memorial.

But almost a year later, with the sculpture in storage at Hensley Field, and the war memorial’s removal headed for a March 4 date with the Landmark Commission, city staff said they could really use the money.

Broadnax said the “proceeds from the sale could be used to offset the costs for the removal of both the sculpture and monument.”

Officials say the city will soon be out $480,000 if they disassemble, remove and transfer the 65-foot-tall obelisk and four surrounding Confederate generals out of Pioneer Park Cemetery, to which the memorial was moved from Old City Park in 1961. That cost would be on top of the more than $450,000 it cost to remove the Lee sculpture.

The plinth removal, too, is no small expenditure. Assistant City Manager Joey Zapata has said its removal and conservation will cost around $180,000, while landscaping the site is expected to run an additional $30,000. Already crews have removed the stairs and seating from the site, and the plinth is expected to be gone by March.

City staff said repeatedly after the Lee statue’s removal that they knew of interested parties looking to take the sculpture off the city’s hands. Among them were collectors and at least one Confederate museum, in White Settlement, interested in borrowing it. Several council members have repeatedly called for its sale. But in January, Office of Cultural Affairs director Jennifer Scripps said that because of the April 2018 vote not to use an auction house, the city hadn’t received serious inquiries.

Even if city staff contracts with an auction house, it’s no done deal.

“The City Council will still decide whether to pursue the sale when we have an auction contract for their consideration,” Zapata said. That vote would likely come in April.

Broadnax’s memo also contained another surprise: while the plinth itself has not yet been opened, “a metal object was found in one of the pillars on a side stairway.”

“This may or may not be the time capsule but appears to be a metal box that has collapsed,” Broadnax wrote.

The city manager said the item was sent to city archivist John Slate for further investigation and preservation.

Whether that’s the time capsule or it’s located elsewhere, once the work is completed at Oak Lawn Park, the Office of Cultural Affairs will “prepare for a public opening of any time capsule found at the site,” Broadnax wrote.

As for the memorial itself, Broadnax said a certificate for demolition or removal has been filed with Landmark, which will debate next month whether the Confederate War Memorial is part of the graveyard’s historic designation given in 2002, or an outlier because it was moved from elsewhere and does not honor one of Dallas’ founders.

This process could take several months — especially if Landmark decides not to abide by the council’s Feb. 13 vote to remove the memorial.

The monument, next to the Kay Bailey Hutchison Convention Center, was recently defaced after the vote. Broadnax wrote that city officials are “exploring additional temporary measures to protect or cover the monument” during the lull.