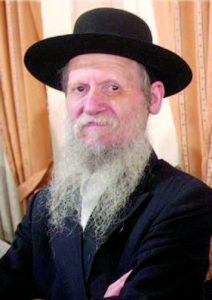 The olam haTorah mourns the passing of Hagaon Harav Refael Yechezkel Brettler Zt”l, one of the last talmidim of the Chazon Ish Zt”l. Rav Brettler entered the Ponovezh Yeshiva before his bar mitzvah, where he heard shiurim from the great Roshei Yeshiva. He was renowned as a masmid who was a tremendous lamdan and expert in all aspects of the Torah, including some of the most difficult halachos.

At a young age, the Chazon Ish took interest in his growth, and for the last three years of his life, they would learn as chavrusos. After his marriage, he entered Kollel Chazon Ish, where he learned with the close talmidim of the Chazon Ish and was known as one of the foremost talmidei chachomim in the kollel. Throughout his life, many people would bring their toughest questions to him requesting that he enlighten them with his clarity in the most difficult issues.

Rav Yechezkel took ill several years ago, and he was niftar this past Shabbos. The levayah took place Sunday morning, and hespedim were delivered by Hagaon Harav Gershon Edelstein shlita of Ponovezh, Hagaon Harav Dov Landau shlita of Slobodka, his brother in law Hagaon Harav Moshe Shternbach shlita, Raavad of Yerushalayim, amongst others. Kevurah was in the Shomer Shabbos Bais Hachaim in Bnei Brak.