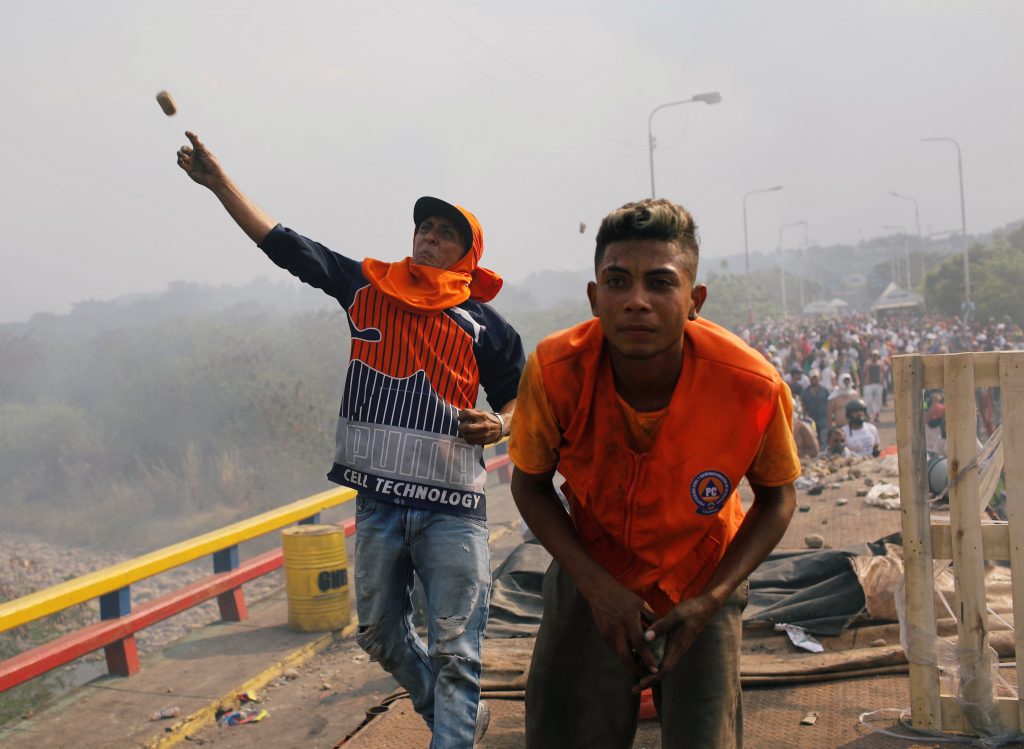 At least two people were killed and trucks loaded with foreign aid were set ablaze after Venezuelan President Nicolas Maduro deployed troops and armored vehicles to turn back humanitarian assistance at border crossings with Colombia and Brazil.

Maduro said he was breaking diplomatic relations with Colombia and ordered its diplomatic staff to leave Venezuela within 24 hours because of its government’s assistance to opposition leader Juan Guaido.

Guaido, who most Western nations recognize as Venezuela‘s legitimate leader, gave a personal send-off on Saturday to a convoy carrying U.S. aid departing from the Colombian city of Cucuta. The opposition says the foreign humanitarian assistance is desperately needed to tackle widespread food and medicine shortages in Venezuela.

But Maduro denies his oil-rich nation has any need of aid and accuses Guaido of being a coup-mongering puppet for President Donald Trump.

Washington warned on Friday that it could impose tough new sanctions on Venezuela if Maduro blocked the aid shipments.

In the Venezuelan border towns of San Antonio and Urena, troops fired tear gas and rubber bullets at opposition supporters, including lawmakers, walking towards the frontier waving Venezuelan flags and chanting “freedom.”

People in Urena barricaded streets with burning tires, set a bus alight and hurled stones at troops to demand that Maduro allow aid into a country ravaged by an economic meltdown that has halved the size of the economy in five years.

Colombia’s government had said that aid trucks would be unloaded at the border and their cargo transported by “human chains” that formed on the road that leads toward Venezuela.

However, Venezuelan security forces halted the convoys with a barrage of teargas. At the crossing by Urena, two trucks caught fire, sending plumes of dark smoke into the air, while crowds started removing boxes of supplies, a Reuters witness said.

In the southern town of Santa Elena de Uairen, near the border with Brazil, at least two people were killed in clashes with security forces, according to a doctor at the hospital where they were treated. On Friday, a couple in a nearby indigenous community were shot dead by security forces.

Rights group Penal Forum said it had recorded 29 injuries and two deaths across Venezuela in clashes with troops, though Reuters could not verify this.

Guaido had appealed to Venezuela‘s armed forces to stand to one side and allow aid in, promising amnesty to all officers who disavowed Maduro. Several soldiers, whose families suffer from the same shortages as other Venezuelans, took up his offer.

Twenty-three members of the security forces defected on Saturday, including 18 members of the National Guard and two police officers, Colombia’s migration authority said.

A social media video showed troops who abandoned their post driving armored vehicles across a bridge linking Venezuela and Colombia, knocking over metal barricades, and then jumping out of the vehicles and running to the Colombian side.

“What we did today, we did for our families, for the Venezuelan people,” said one of the defectors in a video broadcast by a Colombian news program, which did not identify them. “We are not terrorists.”

On Saturday, Maduro turned his ire on Colombia and said President Ivan Duque’s government was allowing its territory to be used for “attacks against Venezuela.”

“For that reason, I have decided to break all political and diplomatic relations with Colombia’s fascist government,” he told cheering supporters.

Nearby, thousands of white-clad protesters gathered outside a military base in Caracas to demand that the armed forces allow the aid in.

According to a Reuters witness, two humanitarian aid trucks crossed the Brazilian border although they had not passed through the Venezuelan customs checkpoint.

Trump’s national security adviser John Bolton canceled plans to travel to South Korea to prepare for a summit addressing North Korea’s nuclear program in order to focus instead on events unfolding in Venezuela, his spokesman said on Friday.

Vice President Mike Pence, in a message on Twitter on Saturday, said: “To Juan Guaido and all the people of Venezuela taking a stand for freedom and humanitarian relief: Estamos con ustedes. We are with you.”