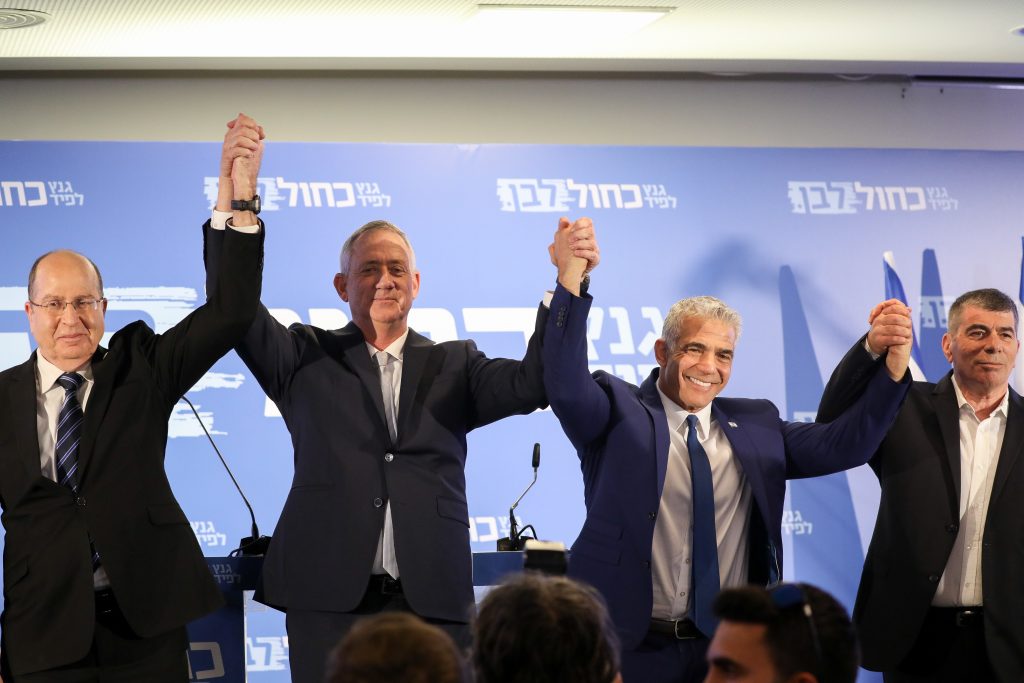 The last-minute alliance of Benny Gantz and Yair Lapid apparently resonated with the voters, as the first poll issued since the news of their alliance broke on Thursday morning shows their new Blue and White party 10 mandates ahead of Likud, 36 to 26.

Gantz and& Lapid appeared in public for the first time together on Thursday evening since announcing their joint venture, to promise that they won’t be winning only in the polls.

“Today we are changing the face of Israel,” Gantz said in a speech carried live on national news.

“In the past decade something has gone wrong,” he said. “Israel has lost its way. The government has incited division [in Israeli society], it’s a government that divides and rules. We’re here to say, ‘enough.’ Instead of division, we want unity. Instead of extremism, we want dignity. Instead of fraction, we propose national reconciliation.”

Lapid said: “We are creating a ruling party. The Israeli public will go to the polls on the 9th of April to choose what kind of country they want, what sort of country their children will live in: a country of investigations, corruption and incitement or a country of hope, resilience and a promise for the future. Netanyahu chose Kahane’s people as his partners. We choose each other, and more than that, we choose the citizens of Israel.”

On stage with Gantz and Lapid was former IDF chief of staff and now Blue and White No. 4 Gabi Ashkenazi, who was widely credited with bringing the two together.

In his first political speech since leaving the army in 2011, Ashkenazi said he acted “out of a sense of purpose, for my father and mother who made aliya to this country, dreamed, saw their dreams fulfilled and built a home steeped in Zionism.”

He said he believed “we have a winning team.”

Earlier on Thursday, Ashkenazi was quoted by Channel 12 as hinting that President Reuven Rivlin would prefer their party to Likud when deciding who to tap to form the next coalition after the elections.

“I hope this train stops at the President’s Residence. I can only guess who the president wants to see there,” Ashkenazi said.

The comment drew a disavowal from Rivlin’s office, which said his decision will be based on “the results of the election and following consultations [with the parties], as every single president has done through the years.”