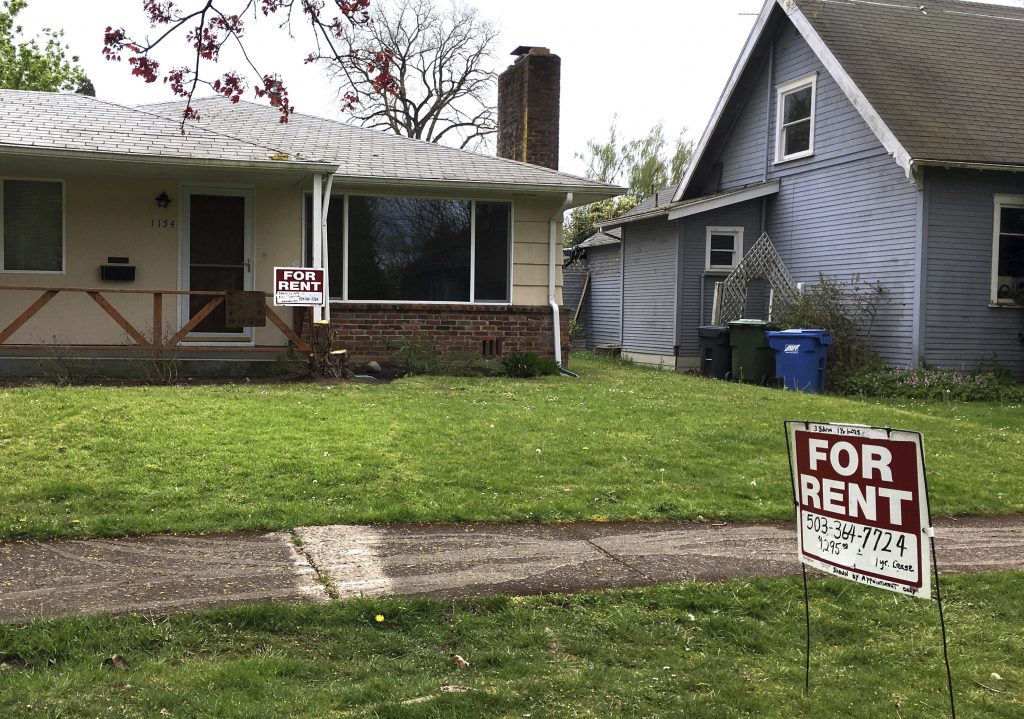 Faced with a housing shortage and skyrocketing rents, Oregon is poised to become the first state to impose mandatory rent controls, with a measure establishing tenant protections moving swiftly through the Legislature.

Many residents have testified in favor of the legislation, describing anxiety and hardship as they face higher rents. Some have gone up by as much as almost 100 percent — forcing people to move, stay with friends or even live in their vehicles.

The town of Medford recently authorized churches to offer car camping for the homeless on their parking lots. Cities across the West Coast are struggling with soaring housing prices and a growing homelessness problem.

A House committee on Wednesday backed the measure, sending it to the full chamber for a vote as soon as next week. The Senate passed it last week.

The committee rejected an amendment that would have exempted cities with populations under 150,000 and another that would have delayed the measure from becoming law until Jan. 1, 2020, instead of immediately after Brown signs it.

“We’ve waited too long as it is, and there are too many people living in tents. It is an emergency,” said Rep. Tawna Sanchez, a Portland Democrat and member of the House Committee on Human Services and Housing that endorsed the legislation.

Oregon’s housing shortage is getting worse as people keep moving to the state, lured by its forests, mountains, coastline, relaxed lifestyle and job opportunities. Oregon ranked second to Vermont as the top moving destination in 2018, according to a study by United Van Lines, the largest U.S. household goods mover.

California restricts the ability of cities to impose rent control. Last November, voters defeated a ballot initiative that would have overturned that law.

“Homelessness and affordability have no boundaries,” said Rep. Mark Meek, a Democrat from a Portland suburb. “We’re going to be leading the nation now with this legislation.”

Oregon’s measure prohibits landlords from terminating month-to-month leases without cause after 12 months of occupancy and limits rent hikes to once per year. Those increases are limited to 7 percent above the annual change in the consumer price index.

Landlords can terminate tenancies only with 90 days’ written notice and payment of one month’s rent, with exemptions in some cases. A landlord can refuse to renew a fixed-term lease if the tenant receives three lease violation warnings within 12 months and the landlord gives 90 days’ notice.

“I believe most landlords will be able to adapt and operate within the parameters,” said Jim Straub, the group’s legislative director.

Eric Lint, who lives in the popular mountain town of Bend, urged lawmakers to pass the protections because of skyrocketing rents. The medical lab where he works is chronically understaffed because potential hires say there is a lack of affordable housing.

Lint said his hourly pay has risen 8 percent over five years. Meanwhile, his rent has increased 66 percent. He plans to move away in the fall but did not say where in his testimony.

Anna Pena, a senior at the University of Oregon in Eugene who works full time, described living in a house smaller than 1,200 square feet with five roommates and spending over half her income on rent that then increased by 15 percent.

“Ultimately, housing insecurity has been one of the biggest setbacks for my education and personal health,” she said.

Sen. Tim Knopp, a Republican from Bend, said before he voted against the measure last week that it does not address the housing supply issue.

Another measure aiming to deal with that issue would require cities and counties to allow duplexes and some higher-density housing in lands zoned for single-family homes.

House Speaker Tina Kotek, a Democrat, said 30,000 housing units must be built per year to meet the state’s current housing deficit and to build for the future as more people move to Oregon.