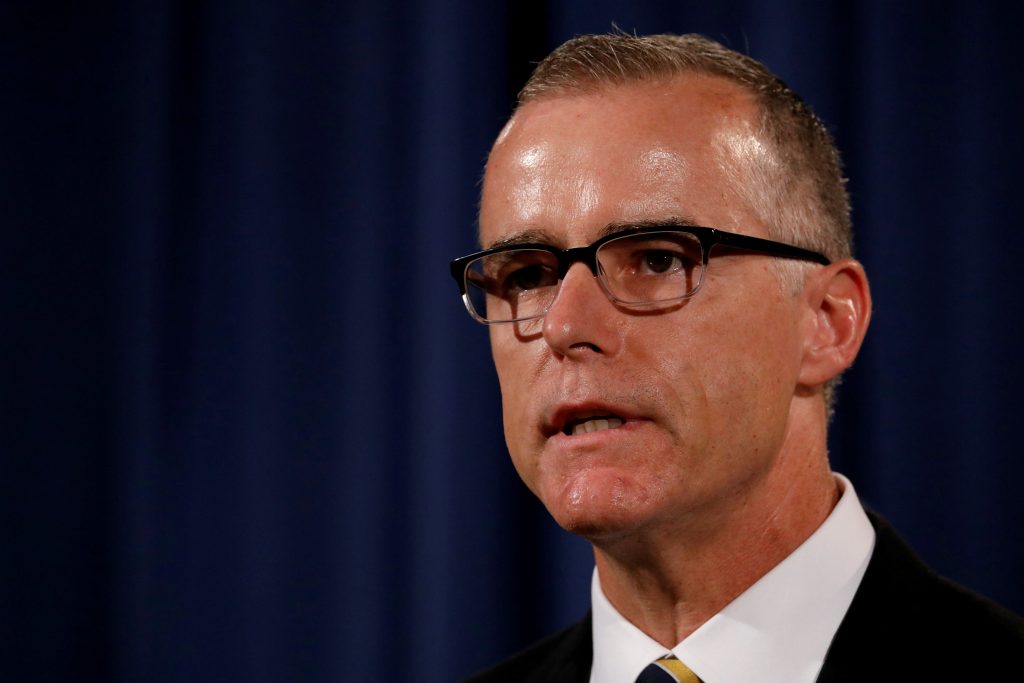 Former acting FBI director Andrew McCabe on Thursday sought to further downplay the discussion in which he says Deputy Attorney General Rod Rosenstein broached using the 25th Amendment to oust President Donald Trump from office, asserting that Rosenstein was merely “thinking off the top of his head.”

“This was a mention in a conversation, and Rod mentioned it in a way thinking about who might support such an effort,” McCabe said during a discussion with more than a dozen journalists who cover law enforcement, including one from The Washington Post. “I at no time got the impression that he’d actually sought support, or talked to those people about it, or asked people, you know, ‘would you support this?’ or ‘would you not.’ ”

“It was simply Rod thinking off the top of his head, this is a thing that could be done, are there people that would want to do that,” McCabe added.

Thursday’s discussion was part of McCabe’s media tour to promote his book, which details McCabe’s career in law enforcement and how he came to believe Trump was a danger to American democracy. The book and McCabe’s interviews about it have riled the president, who has called McCabe a liar but seized on some of his revelations to accuse federal law enforcement of plotting a coup.

On Wednesday, for example, Trump called McCabe “a poor man’s J. Edgar Hoover,” the FBI’s controversial first director who famously collected damaging information on prominent political figures. McCabe, Trump said, “made a fool out of himself over the last couple of days.”

McCabe’s descriptions of his conversations with Rosenstein, which he documented in contemporaneous memos, have drawn particular attention from the president and his allies.

In addition to claiming Rosenstein broached the 25th Amendment, which allows a president’s Cabinet to remove him from office, McCabe alleges that the deputy attorney general suggested he could wear a wire into the White House and secretly record Trump. Sen. Lindsey Graham (R-S.C.) chairman of the Judiciary Committee, has said he plans to investigate the matter.

The conversations, McCabe said, occurred in the hectic days in May 2017 after Trump fired James Comey as FBI director, and as federal law enforcement was mulling what it should do next.

McCabe has said Rosenstein was serious about wearing a wire, and though the comment about the 25th Amendment was more fleeting, he said Thursday he felt it was important to document in real time.

“It was remarkable to me that we were in a time that the leader of the FBI and the leader of the Department of Justice, certainly with respect to this investigative effort, that we were having conversations that would include mentions of things like the 25th Amendment,” McCabe said. “I had worked for over 20 years at that point without ever discussing the 25th Amendment at work, or at home, or on the media, for that matter.”

Through a Justice Department spokeswoman, Rosenstein has vaguely disputed reporting on his conversations with McCabe. “The deputy attorney general never authorized any recording that Mr. McCabe references. As the deputy attorney general previously has stated, based on his personal dealings with the president, there is no basis to invoke the 25th Amendment, nor was the DAG in a position to consider invoking the 25th Amendment,” a spokeswoman said in a recent statement.

McCabe has not alleged that recording the president was ever authorized. After Comey’s firing, he said, the bureau opened a dual-part investigation into the president — one that explored whether he had committed a crime and whether he was a threat to national security. He said he then notified Rosenstein, and Rosenstein “was very interested in why we thought we needed to do that.”

The investigation, McCabe said Thursday, was soon taken over by special counsel Robert Mueller, and while FBI agents were assigned to work on it, they worked free from day-to-day supervision from their normal bureau supervisors. He said he believed that investigation “had produced real results,” and he hoped they would one day be shared with the public. That is not a certainty, as the special counsel regulations call only for a “confidential report” to be sent from Mueller to the attorney general.