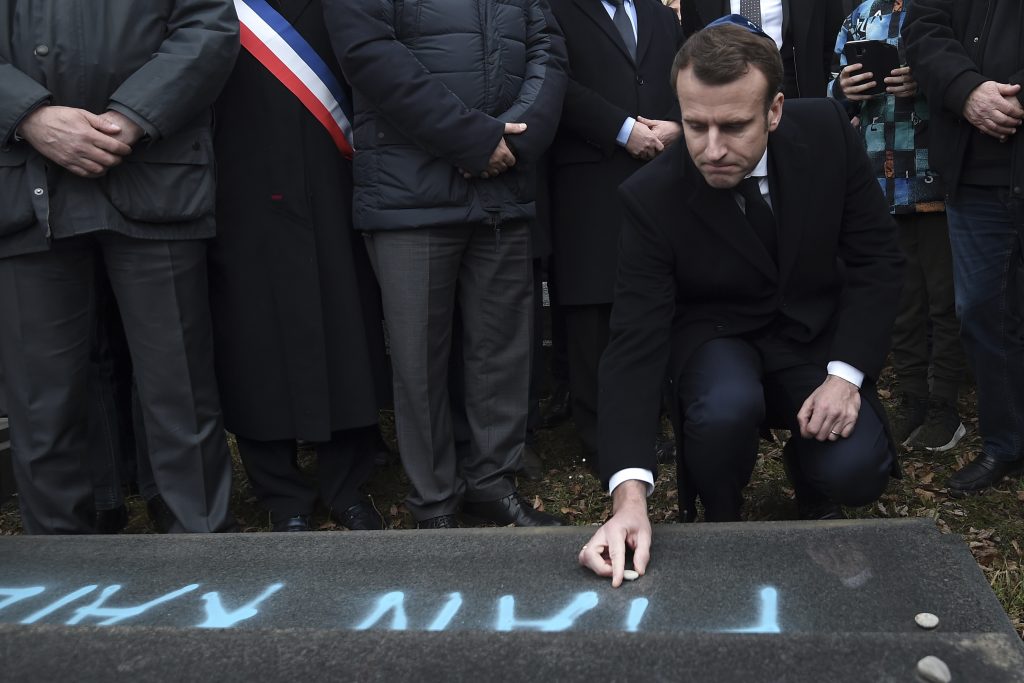 The French government will adopt an international organization’s definition of anti-Semitism and propose a law to reduce hate speech from being circulated online, French President Emmanuel Macron said Wednesday.

President Macron, speaking at the annual dinner of a Jewish organization, said France and other parts of Europe have seen in recent years “a resurgence of anti-Semitism that is probably unprecedented since World War II.”

Macron said applying the working definition of anti-Semitism drawn up by the International Holocaust Remembrance Alliance would help guide police forces, magistrates and teachers in their daily work.

Since the intergovernmental organization approved the wording in 2016, some critics of Israel have said it could be used suppress Palestinian rights activists. The definition states anti-Semitism can take the form of “denying the Jewish people their right to self-determination, e.g., by claiming that the existence of a State of Israel is a racist endeavor.”

Macron said he thinks that view is correct.

“Anti-Zionism is one of the modern forms of anti-Semitism,” the French leader said in Paris at the dinner of Jewish umbrella organization CRIF. “Behind the negation of Israel’s existence, what is hiding is the hatred of Jews.”

Macron mentioned anti-Semitism based on “radical Islamism” as a rampant ideology in France’s multi-ethnic, poor neighborhoods.

Israeli Prime Minister Binyamin Netanyahu expressed his appreciation of France’s adoption of the international definition of anti-Semitism in a phone call with the French leader ahead of the speech, Netanyahu’s office said.

Macron also said his party would introduce legislation in parliament in May to force social media to withdraw hate speech posted online and use all available means to identify the authors “as quickly as possible.”

He especially denounced Twitter as waiting days, sometimes weeks, to remove hate contents and to help authorities so a judicial investigation can be led. At the same time, he praised Facebook’s decision last year to allow the presence of French regulators inside the company to help improving practices combating online hate speech.

Macron’s speech came a day after thousands of people attended rallies across France to decry an uptick in anti-Semitic acts in recent months. On Tuesday morning, about 80 gravestones spray-painted with swastikas were discovered in a cemetery in a small village of eastern France.

French President Emmanuel Macron observed a moment of silence Tuesday with parliament leaders at the Holocaust museum in Paris.

The Paris prosecutor’s office said Wednesday that a man has been arrested over a torrent of hate speech directed at Jewish philosopher Alain Finkielkraut during a Saturday march by yellow vest protesters. The insults included words like “Zionist!” and “Go back to Tel Aviv!” and “We are France!”

The man was taken into custody Tuesday evening after a police inquiry was opened into a suspected public insult based on origin, ethnicity, nation, race or religion.

The government last week reported a big rise in incidents of anti-Semitism last year: 541 registered incidents, up 74 percent from the 311 registered in 2017.

In other incidents this month, swastika graffiti was found on street portraits of Simone Veil, a survivor of Nazi death camps and a European Parliament president who died in 2017; the word “Juden” was painted on the window of a bagel restaurant in Paris; and two trees planted at a memorial honoring a young Jewish man tortured to death in 2006 were vandalized.

“That’s our failure,” Macron said. “The time has come to act.”