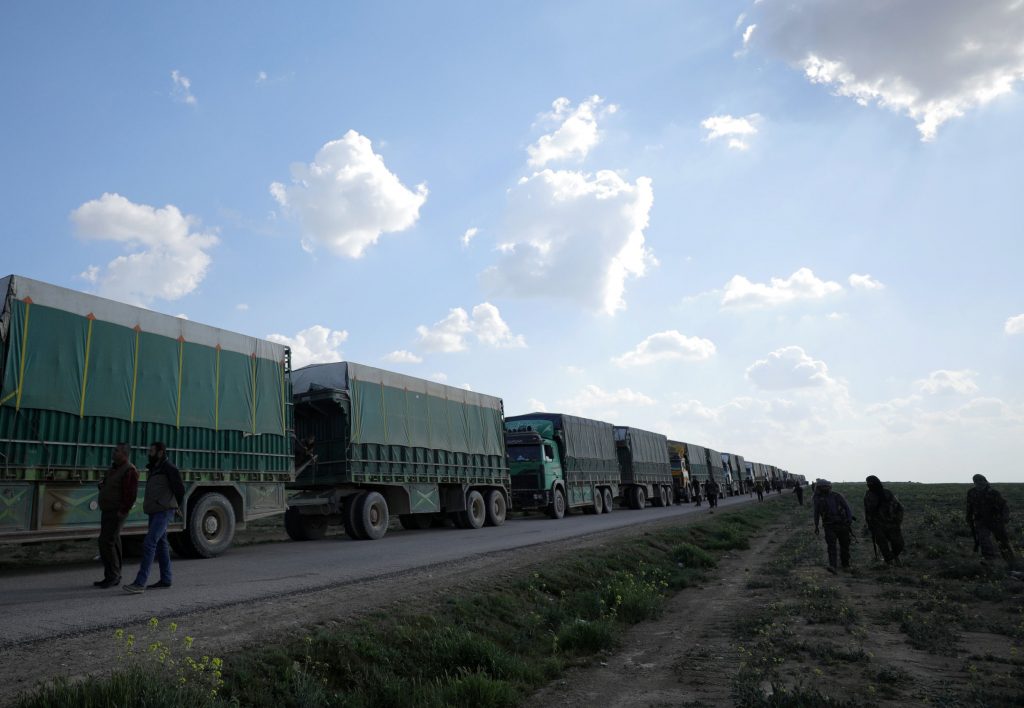 U.S.-backed Syrian forces fighting the Islamic State terror group in Syria handed over more than 150 Iraqi members of the group to Iraq, the first batch of several to come, an Iraqi security official said Thursday.

The official said the IS terrorists were handed over to the Iraqi side late Wednesday, and that they were now in a “safe place” and being investigated.

The transfer marks the biggest repatriation from Syria of captured terrorists so far — an issue that poses a major conundrum for Europeans and other countries whose nationals have been imprisoned as foreign fighters in Syria. The SDF is holding more than 1,000 foreign fighters in prisons it runs in the country’s north, many of them Iraqis and Europeans.

The Kurdish-led Syrian force — and more recently President Donald Trump — have called on these countries to take back their nationals. SDF says it cannot afford to keep the captured foreigners in Syria, but few of their countries want them back.

Earlier this month, Iraqi Prime Minister Abdul-Mahdi said Iraq will take back all Iraqi IS terrorists in Syria, as well as thousands of their family members.

The Iraqi security official, who spoke Thursday on condition of anonymity in line with regulations, said the SDF are holding more than 20,000 Iraqis suspected of IS membership as well as their families in prisons and camps in northern Syria.

An Iraqi intelligence official said that among those were around 500 Iraqi IS fighters, adding that these will be transferred back home in batches. The intelligence official, who also spoke on condition of anonymity, said the first group of 150 was transferred to Iraqi authorities aboard 16 pickup trucks Wednesday night and that they have been moved to the capital Baghdad for interrogation.

The handover came as the U.S.-backed Syrian force is involved in a standoff over the final sliver of land held by the Islamic State group in southeastern Syria, close to the Iraqi border.

A few hundred people — many of them women and terrified-looking children — were evacuated Wednesday from the group’s tiny tent camp on the banks of the Euphrates River, signaling an imminent end to the territorial rule of the terrorists self-declared “caliphate” that once stretched across a third of both Syria and Iraq.

Some 300 IS terrorists, along with hundreds of civilians believed to be mostly their families, have been under siege for more than a week in the tent camp in the village of Baghouz in eastern Syria. It is not clear how many civilians remain holed up inside, along with the terrorists.

More trucks were sent in Thursday to the tip of a corridor leading to the camp to evacuate more people, but Associated Press journalists on the ground outside Baghouz said no civilians emerged.

“We thought more civilians will come out today and we sent 50 trucks over,” said an SDF commander who goes by his nom de guerre, Aram. “We don’t know why they are not coming out.”

It was not immediately clear whether the 150 Iraqis repatriated late Wednesday were among those recently evacuated from Baghouz or terrorists who had been captured earlier.

An Alabama woman who joined IS in Syria also made headlines after the U.S. said Wednesday she won’t be allowed to return with her toddler son because she is not an American citizen. Her lawyer is challenging that claim.

The 24-year-old Hoda Muthana, has said she made a mistake and regrets aligning herself with IS. She is now in a refugee camp in Syria along with others who fled the terrorists.

The Baghouz enclave’s recapture by U.S.-backed Syrian fighters would spell the territorial defeat of IS and allow Trump to begin withdrawing American troops from northern Syria, as he has pledged to do, opening a new chapter in Syria’s eight-year civil war.

Few believe, however, that ending the group’s territorial rule will end the threat posed by an organization that still stages and inspires attacks through sleeper cells in both Syria and Iraq.