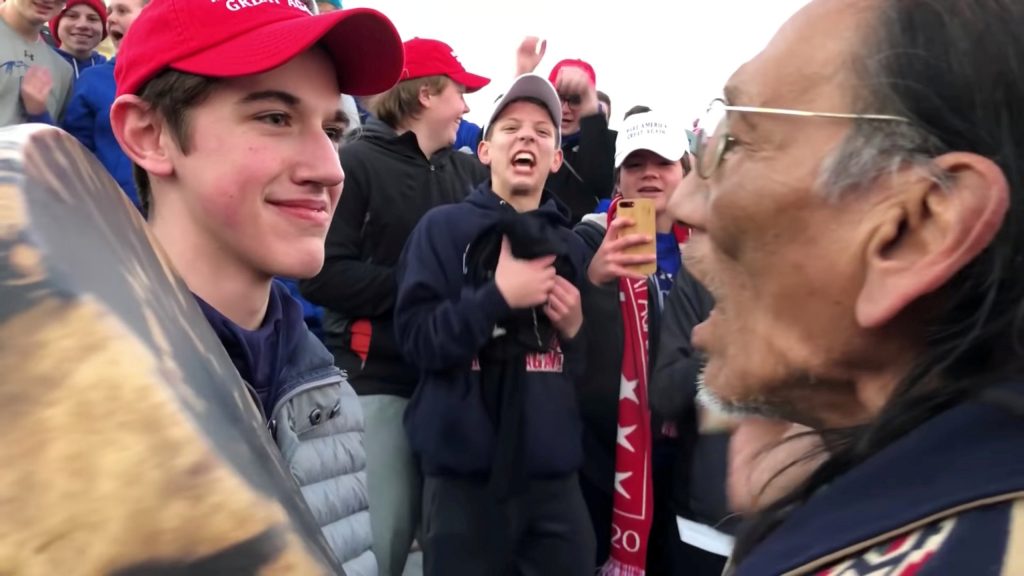 A high school student from Covington, Kentucky, sued the Washington Post for defamation on Tuesday, claiming the newspaper falsely accused him of racist acts and instigating a confrontation with a Native American activist in a January videotaped incident at the Lincoln Memorial.

The lawsuit, filed in U.S. District Court in Kentucky by Covington Catholic High School student Nicholas Sandmann, 16, seeks $250 million in damages, the amount that Jeff Bezos, founder of Amazon.com and the world’s richest person, paid for the Post in 2013.

The lawsuit claims that the newspaper “wrongfully targeted and bullied” the teen to advance its bias against President Donald Trump because Sandmann is a white Catholic who wore a Make America Great Again souvenir cap on a school field trip to the March for Life rally in Washington, D.C., on Jan. 18.

The Washington Post’s Vice President for Communications Kristine Coratti Kelly said, “We are reviewing a copy of the lawsuit and we plan to mount a vigorous defense.”

In a photo that went viral from the incident, Sandmann is seen standing face to face with Native American activist Nathan Phillips. Sandmann stares smiling at him while Phillips sings and plays his drum.

In a statement, Sandmann’s Atlanta-based lawyer, Lin Wood, said additional similar lawsuits would be filed in the weeks ahead.

A private investigation firm retained by Covington Diocese in Park Hills, Kentucky, found in a report released last week no evidence that the teenagers provoked a confrontation.

The students were met at the Lincoln Memorial by offensive statements from members of the Black Hebrew Israelites, the report said.

The investigation also determined that the students did not direct any racist or offensive comments toward Phillips although several performed a “tomahawk chop” to the beat of his drum.

Phillips claimed in a separate video that he heard the students chanting “build that wall,” during the encounter, a reference to Trump’s pledge to build a barrier along the U.S. border with Mexico.

The investigators said they found no evidence of such a chant and that Phillips did not respond to multiple attempts to contact him.

In an early-morning barrage of tweets, Trump ripped The Washington Post and cheered the Covington teen’s lawsuit against the paper that alleges the newspaper falsely accused him of racist acts in a confrontation with Native American activists in January.

The president quoted a line from the lawsuit that said the paper “ignored basic journalistic standards because it wanted to advance its well-known and easily documented biased agenda against President Donald J. Trump.”

In a tweet sent 20 minutes earlier, at 4:20 a.m., Trump fumed that “The Press has never been more dishonest than it is today. Stories are written that have absolutely no basis in fact. The writers don’t even call asking for verification.”

“They are totally out of control,” Trump continued, before pivoting to take credit for the continued existence of the news media. “Sadly, I kept many of them in business. In six years, they all go BUST!”

The president’s animosity for the media has been a cornerstone of his rhetoric since he launched his campaign in 2015, popularizing the term “fake news,” and often targeting outlets that run stories critical of his administration or supporters.

The lawsuit portrays Sandmann as “an innocent secondary school child” victimized by “a modern-day form of McCarthyism,” naming The Washington Post, CNN, NBC and a “social media mob of bullies which attacked, vilified, and threatened Nicholas Sandmann.”