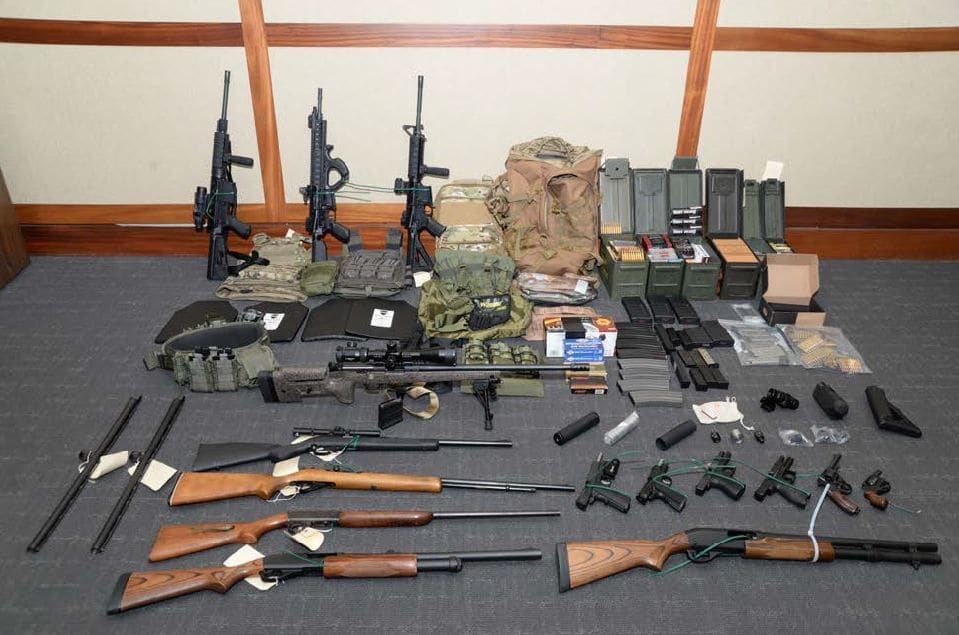 A U.S. Coast Guard lieutenant and self-identified white nationalist has been arrested after federal investigators uncovered a cache of weapons and ammunition in his Maryland home that authorities say he stockpiled to launch a massive domestic terror attack targeting politicians and journalists.

Christopher Paul Hasson called for “focused violence” to “establish a white homeland” and dreamed of ways to “kill almost every last person on earth,” according to court records filed in U.S. District Court in Maryland. Though court documents do not detail a specific planned date for an attack, the government said he had been amassing supplies and weapons since 2017 at the latest, developed a spreadsheet of targets that included House Speaker Nancy Pelosi (D-Calif.), and searched the internet using phrases such as “best place in dc to see congress people” and “are supreme court justices protected.”

“The defendant intends to murder innocent civilians on a scale rarely seen in this country,” the government said in court documents filed this week, arguing that Hasson should stay in jail awaiting trial.

Hasson, of Silver Spring, is expected to appear before a judge for a detention hearing in federal court in Greenbelt on Thursday.

Hasson was arrested on illegal weapons and drug charges on Friday, but the government says those charges are the “proverbial tip of the iceberg.” Officials with the U.S. attorney’s office in Maryland outlined in court documents Hasson’s alleged plans to spark chaos and destruction, describing a man obsessed with neo-fascist and neo-Nazi views.

“Please send me your violence that I may unleash it onto their heads,” Hasson wrote in a letter that prosecutors say was found in his email drafts. “Guide my hate to make a lasting impression on this world.”

A magistrate judge ordered that the Office of the Federal Public Defender represent Hasson; the office declined comment Wednesday.

Hasson has been working at the U.S. Coast Guard headquarters in Washington since 2016, according to court documents filed by prosecutors. He also served in the U.S. Marine Corps from 1988 to 1993 and in the Army National Guard for about two years in the mid-90s.

Court documents do not detail what prompted federal law enforcement to begin investigating Hasson, but they say Hasson has been studying the 1,500-page manifesto of right-wing terrorist Anders Behring Breivik, who unleashed two attacks in 2011 that killed 77 in Norway. They say Hasson’s attack preparations resembled Breivik’s.

The manifesto outlined how Breivik planned and prepared his attacks with the aim of providing an outline for others planning similar terrorist operations, the U.S. court filings say.

Authorities seized 15 firearms, including several long guns and rifles, and more than 1,000 rounds of ammunition from his basement apartment after executing a search warrant this month. Over the past two years he had made nearly two dozen purchases of firearms or related equipment and made thousands of visits to websites that sell weapons or tactical gear.

“I never saw a reason for mass protest or wearing uniforms marching around provoking people with swastikas etc.,” Hasson said. “I was and am a man of action you cannot change minds protesting like that. However you can make change with a little focused violence.”

Hasson’s commitment to destruction appeared to increase in recent weeks, according to details from prosecutors. He created a list of “traitors” and targets on Jan. 19 in a spreadsheet on his work computer.