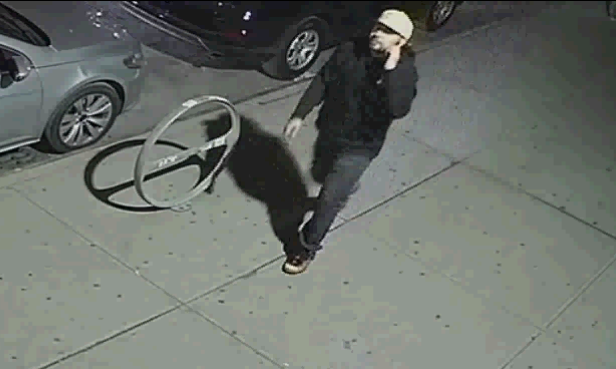 NYPD released early Tuesday a video of the suspect wanted for vandalizing the Chabad of Bushwick last Shabbos as a Shabbos meal was ongoing and children were playing inside.

An unidentified man was seen running away from the scene shortly afterward. Police say that a second person may have been involved in the crime.

A video of the actual attack, obtained by NBC4NY, shows two men at the scene. One of them swings an object twice at the window.

In a statement to Hamodia on Sunday, the NYPD said that the crime “is being investigated as a possible bias incident.”

The shaliach Rabbi Menachem Heller told Hamodia that while he hopes it was “just a random attack by two drunk hoodlums,” he is nearly certain that this was a hate crime targeting Jews.

The incident has not been ruled a hate crime, but Rabbi Heller said he has his suspicions. “This is a very warm community – Bushwick is a very open place, and this is not something typical that should happen over here,” he added.

Mayor Bill de Blasio said Sunday that the NYPD will add security to this synagogue and others nearby.

De Blasio had spoken last Thursday at a rally in Brooklyn against anti-Semitism, where he said, “it’s a very sad reality, but anti-Semitism is alive and well in this world, in this city, in this country, and it must be stamped out once and for all.”

NYPD Assistant Chief Jeffrey Maddrey, commanding officer of Patrol Borough Brooklyn North, met with Rabbi Heller on Monday for a round-table discussion about stepping up patrols at the shul, NBC4NY reported. “We are going to work to stomp out this hate in our community,” he said.

Capt. Timothy Skretch, the commanding officer of Precinct 90, said that “the relationship doesn’t end today. It’s only going to increase.”

This was the first attack of any kind on the Bushwick Chabad House.

Anyone with information on the case should contact the Crime Stoppers hotline at 1-800-577-8477, or text CRIMES and then enter TIP577, or visit www.nypdcrimestoppers.com.