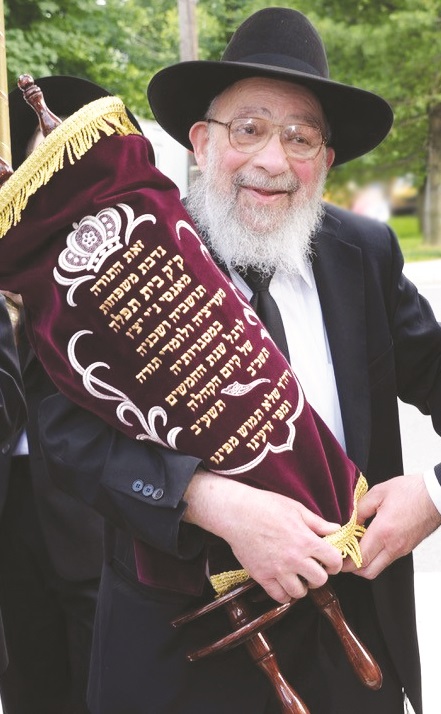 Harav Shlomo Mordechai Breslauer, zt”l, Rav of Beth Tefillah in Monsey, a talmid chacham and yerei Shamayim who served his community as Rav, mechanech and posek, with the utmost devotion and uprightness, was niftar on Tuesday, 7 Adar I/February 12. He was 88 years old.

Rav Breslauer was one of the elder Rabbanim in Monsey, where he was involved in communal issues and gave kashrus certification to several establishments. His shul, Beis Tefillah, was known for the serious atmosphere it maintained for davening and kedushas beis haknesses, as emphasized by Rav Breslauer from the start. He was also a longtime beloved mechanech at Yeshiva of Spring Valley, where he taught generations of children with his trademark ehrlichkeit and warmth.

Rav Breslauer was born in 1930 in Fürth, Germany, where his father, Harav Yehuda Breslauer, zt”l, served as Rav. During the Kristallnacht pogrom of 1938, Rav Yehuda Breslauer’s shul was vandalized and he was arrested. He languished in prison for several weeks. At one point, a Nazi soldier ordered Rav Yehuda to say the Shem Hashem. When he refused to comply, the Nazi soldier aimed his rifle and started counting “1 …”; Rav Breslauer bared his chest and finished off the count. Startled, the Nazi struck him in the face with the butt of his rifle, muttering, “Go, you brave Jew.” That blow caused Rav Breslauer permanent injury to his face.

Following Rav Yehudah’s release, the family fled Germany, settling in Washington Heights, where many other German Jewish refugees had made their new homes. There, a group of fellow refugees appointed the elder Rav Breslauer the Rav of their shul, Kehillas Yaakov. While still in Germany, Rav Breslauer had a reputation as a kana’i, refusing to even shake hands with the leader of the local Reform temple.

In Washington Heights too, he did not shy away from standing on principle on matters of hashkafah, no matter how unpopular. He became an outspoken critic of the newly founded State of Israel, aligning his views with those of the Satmar Rebbe, zy”a. Yet, with time, his kehillah came to appreciate his authentic hashkafas haTorah, and that authenticity was seen in his son, Shlomo, who followed in his father’s footsteps as a loyal oved Hashem and a manhig to his people.

Young Shlomo went to Yeshiva Torah Vodaath before learning in Yeshivas Mir in New York under the Rosh Yeshivah, Harav Shmuel Brudny, zt”l. In the Mir, he became the first American bachur to be awarded semichah from Hagaon Harav Avrohom Kalmanowitz, zt”l, Rosh Yeshivah of the Mirrer Yeshivah in America, who initially expressed skepticism at the prospect of an American bachur passing the semichah exam. Not only did he receive semichah, some talmidim of the yeshivah said that Rav Breslauer had set the bar so high with his knowledge that it was nearly impossible for others to attain semichah.

In 1953, Rav Breslauer married Leah Spitzer, daughter of Rabbi Eliezer Lipman, z”l, and Mrs. Reina Spitzer, a”h. The Spitzers had fled Vienna in 1939, settling in Williamsburg, where Rabbi Spitzer became one of the founders of the Viener kehillah, and Mrs. Spitzer founded the famed Viener Bikur Cholim.

As a young chassan, Rav Breslauer was offered a fourth-grade teaching job at the Yeshiva of Spring Valley (YSV), a position he would hold for 54 years. Even as a full-time Rebbi, for many years, he spent his afternoons learning in Monsey’s Bais Medrash Elyon, under the leadership of Harav Reuven Grozovsky, zt”l, Rosh Yeshivah, Yeshiva Torah Vodaath.

After the Breslauers’ marriage, the couple settled in rural Monsey where Rav Breslauer continued teaching in YSV while Mrs. Breslauer ran a babysitting service.

Rav Breslauer was a devoted Rebbi, teaching with ehrlichkeit. Many talmidei chachamim were among Rav Breslauer’s early students. He taught Sefer Vayikra and the related Mishnayos with such clarity that, years later, his students who went on to learn in Yeshivas Brisk related that they understood the sugyos of Kodshim with greater depth because they had been in Rav Breslauer’s classroom all those years earlier.

When he needed an additional source of income, Rav Breslauer taught general studies as well, placing great efforts to do so strictly al pi hashkafas haTorah. He would bring in articles and challenge the boys to find those statements that were against Torah values. It pained him deeply that secular subjects were often taught in a manner devoid of Torah orientation, once penning an article in the Jewish Observer decrying the state of affairs in too many of our yeshivos, where the general studies department “participates little to promote this goal [of rearing Torah-true Jews] and quite often serves as a detracting influence.”

In 1976, Rav Breslauer was asked to serve as Rav of Monsey’s Beis Tefillah. While initially balking at the prospect of serving in the rabbinate, he was prevailed upon by Hagaon Harav Yaakov Kamenetsky, zt”l, to accept the position. He heeded the Gadol’s advice and, ultimately led the kehillah for over 40 years. Rav Yaakov wrote his ksav rabbanus and davened in Beis Tefillah each weekday, appreciating the sincerity of the tefillos there.

Rav Breslauer had learned the role of Rav from his father and led his own kehillah with a legendary devotion and a sense of achrayus, maintaining the mesorah of minhagei Ashkenaz, while ensuring that those from other traditions would feel comfortable as well.

He maintained a soft and pleasant demeanor, yet was unbending in adherence to halachah, ehrlichkeit and a life of Torah and mitzvos. He delivered shiurim and answered questions, guiding his mispallelim with patience, focus and the utmost devotion.

About 20 years ago, Rav Breslauer realized a dream with the establishment of a kollel housed in and supported by Beis Tefilah. Led by Harav Asher Dovid May, the kollel boasts three sedarim a day and has among its ranks some of Monsey’s most prominent talmidei chachamim.

Rav Breslauer eschewed kavod; over the decades as a public figure, there were inevitably functions at which he was honored. Yet he avoided looking at journal ads that he was the subject of. On occasions that he was awarded gifts by an organization, he would graciously accept the item, then promptly return its cash value to the mosad that had given it. On the day of a Torah Umesorah dinner where he was honored, he fasted and instructed his family not to attend.

The paradigm of an ish emes, the last year he served as a Rebbi, Rav Breslauer refused to take a salary, lest at some point over his decades of teaching he arrived late.

One grandson recalled that he once offered to shovel “Opa’s” driveway but ultimately forgot. Rav Breslauer called, asking if he had said “bli neder.” When the grandson could not respond in the affirmative, Rav Breslauer assured him that he could shovel the driveway himself, but first wanted his grandson to appoint him as a shliach, ensuring that he did not utter an untruth.

The mashgiach didn’t allow the food to be brought in, but the gabbai asked that he call Rav Breslauer; surely his ruling didn’t extend to a Rebbe! The mashgiach called, but Rav Breslauer was insistent: No outside food was allowed in. The next day the Rebbe called Rav Breslauer to thank him, telling him, “This is how a kashrus organization ought to be run.”

Rav Breslauer radiated palpable yiras Shamayim, reminiscent of earlier generations. When he flew to Eretz Yisrael for the first time, Rav Breslauer sat and learned the entire flight, until the pilot announced that they were beginning their descent and would soon land in Tel Aviv, at which point the normally reserved and composed Rav burst out crying, terrified at the prospect of entering “paltrin shel Melech — the King’s palace.”

When he landed, he threw himself on the ground, kissing the holy soil. Before his grandchildren left for Eretz Yisrael, he would talk with them about the awesome responsibility that came with being in Hashem’s land.

While being in reality a giant among men, Rav Breslauer never held himself higher than others. He once uncharacteristically called over his eldest daughter, Mrs. Devora Wosner, to his house, where he showed her a picture of her younger self, crying. Rav Breslauer was pained that he allowed her to cry as he took a cute baby picture and asked her for mechilah for causing her unnecessary pain.

Rav Bresaluer, the roeh Yisrael was niftar on 7 Adar, the yahrtzeit of Moshe Rabbeinu. The levayah was held that afternoon at Beis Tefillah.