Business AUTO REVIEW: The 2019 CTS-V Is a Superb Performer, But Is It a Superb Cadillac?
Business 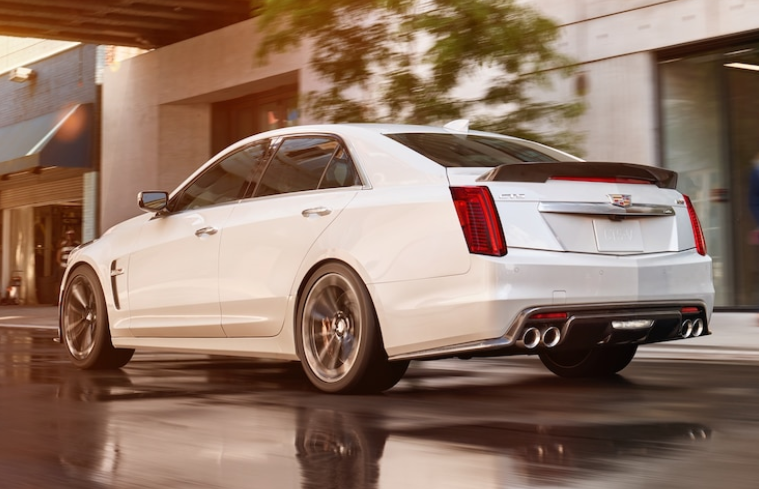 The Cadillac stand at the North American International Auto Show last month neatly summarized Cadillac’s current product predicament, one that goes beyond how many crossover SUVs it sells.

For 15 years, Cadillac has hoped that its V performance vehicles would join the hallowed ranks of BMW’s M Series and Mercedes-Benz AMG models. And it has succeeded admirably, producing cars that equal or beat the competition in performance, only to be shunned by consumers as Cadillac’s sales and reputation continues its long, painful slide into irrelevance, despite producing cars that out-German the Germans.

And perhaps that’s where the problem lies.

The thought occurred to me after sampling the 2019 Cadillac CTS-V, the highly strung, high-performance version of Cadillac’s midsize luxury sedan.

It’s not that the Cadillac CTS-V isn’t a superb performer; it is. With a rigid rear-wheel-drive chassis and a 640-horsepower supercharged 6.2-liter V-8, reaching 60 mph from a standstill takes 3.7 seconds, comparable to its challengers from Stuttgart. The transmission shifts smartly, the tires communicate their intentions, the brakes grip fiercely and the seats hold you firmly in place. It’s a car that becomes an extension of yourself, a tool for gobbling up the highways. In other words, this car is an absolute blast.

Better yet, the car is connected, with a 4G LTE Wi-Fi hotspot, wireless charging, and the requisite infotainment system. This way, you can be entertained as you toddle along in traffic.

Do I admire this car? Absolutely, despite its minor annoyances that only a GM could manage. For example, when you order the Recaro front bucket seats, you give up front-seat ventilation, a luxury you can get in a car at half the price. The cabin is noisy at speed, with way too much tire noise. I don’t mind the symphony coming from the exhaust, but I do mind it coming from the road and tires. This is a Cadillac, not a Chevrolet. And trunk space is pathetically meager.

Nevertheless, this is a fabulously fun car, just like the CTS-V models that preceded it. But the problem with the CTS-V is the same one that’s plagued new Cadillacs for 15 years or more, one that afflicts nearly every new model from GM’s flagship brand: These are great vehicles, but they’re not great Cadillacs.

Sure, auto journalists have sung these cars’ praises, myself included. But we don’t buy Cadillacs. Those who do are clearly rejecting them because it’s not what they expect of a Cadillac. Buyers expect what Cadillac has long delivered: indulgent comfort, spacious accommodations, massive cargo space and state of the art technology wrapped in sophisticated yet flashy styling in an impeccably built car.

This is why the Escalade SUV commands the highest transaction price of any Cadillac; it’s the closest approximation of what consumers truly desire from the brand. It’s big, brash, bold, bodacious, powerful and unapologetic. Other Cadillacs seem timid in comparison; plain vanilla imitations of Cadillac’s past glory.

The CTS-V’s knife-edged styling is what we’ve come to associate with modern-day Cadillacs. Yes, it’s eye-catching and sporty, but you’d hardly call it fetching. In fact, its numerous vents and go-fast body trim bits lack the panache a brand of this caliber requires. Its look is stale.

Certainly GM’s design studios are capable of creating drool-inducing Cadillacs, such as the Cien and Elmiraj, two concept cars that seemed as if Cadillac truly understood its heritage.

And here’s where the problem lies: Where’s the elegance, the eloquence that capture the essence of our age?

And Cadillac knows this.

It’s why the company displayed a 1959 Cadillac Eldorado Convertible at the auto show in Detroit last month and attracted far more attention than the hunchback-styled XTS sedan on the floor beneath it. It’s a car that encapsulated the exuberance of the age, one manufactured to the highest standards of the industry, built at a time when Cadillac understood the difference between class production and mass production, a lesson too many luxury brands have forgotten. GM didn’t build many Cadillacs, but every one it built was exquisite.

Can that be said today?

Do GM executives understand what Cadillac needs to be? Better yet, are the vehicles wearing the Cadillac name worthy of the badge, let alone $87,990 plus tax?

The market will decide.