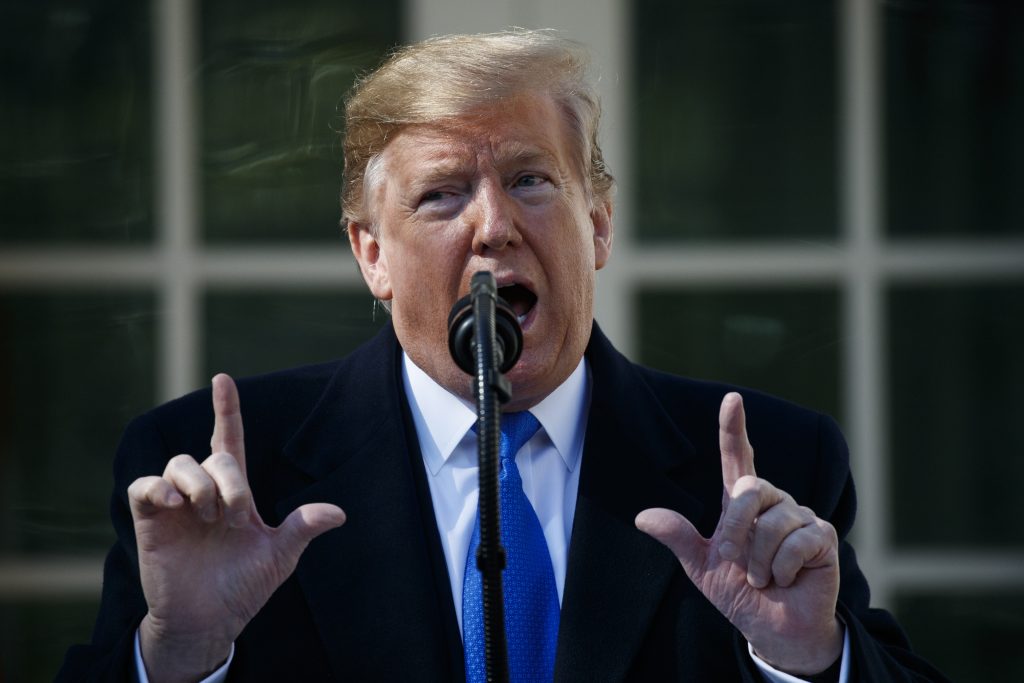 The president trained his ire on Rosenstein – a member of his own administration – and two bygone officials from the Trump Justice Department, former acting FBI Director Andrew McCabe and former Attorney General Jeff Sessions, in a pair of morning tweets.

“Wow, so many lies by now disgraced acting FBI Director Andrew McCabe. He was fired for lying, and now his story gets even more deranged. He and Rod J. Rosenstein, who was hired by Jeff Sessions (another beauty), look like they were planning a very illegal act, and got caught,” President Trump wrote. “This was the illegal and treasonous ‘insurance policy’ in full action!”

Trump was apparently referring to comments McCabe has made recently, amid a media blitz ahead of the release of his book about working in Trump’s administration. McCabe told CBS News’s “60 Minutes” that he and Rosenstein discussed removing Trump from office through the 25th Amendment, and the possibility of Rosenstein wearing a wire to “collect evidence” about the president’s motivation for firing former FBI Director James Comey.

“To be fair, it was an unbelievably stressful time,” McCabe said in the interview. “I can’t even describe for you how many things must have been coursing through the deputy attorney general’s mind at that point. So it was really something that he kinda threw out in a very frenzied chaotic conversation about where we were and what we needed to do next.”

Rosenstein has disputed this allegation, which The Washington Post has previously reported. The Justice Department also issued a carefully parsed response to the “60 Minutes” interview, writing that Rosenstein “never authorized” any recording of the president and that he wasn’t “in a position to consider invoking the 25th Amendment.”

Fox News Channel contributor Dan Bongino appeared on Fox on Monday morning and said of the McCabe interview, “What was laid out last night . . . was a coup attempt on the president of the United States.”

The three men – Rosenstein, McCabe and Sessions, all Republicans – have become some of Trump’s favorite punching bags. As attorney general, Sessions was “weak,” “beleaguered” and bore a resemblance to the cartoon character “Mr. Magoo,” Trump has said. McCabe was a “puppet,” a “disgrace” and “pretends to be a ‘poor little Angel.’ ”

But President Trump has reserved some of his harshest criticism for the man still in his employ.

In late November, the president shared a meme from a supporter’s Twitter account that showed a bevy of who Trump considers to be nemeses locked up behind bars. There was Rosenstein, crowded into the back of the cell, near special counsel Robert Mueller and just behind former President Barack Obama.

McCabe’s book and recent interviews have reignited the long-running feud between Trump and one of his top Justice Department officials, and at least one senator has taken up the president’s case. Senate Judiciary Committee Lindsey Graham, R-S.C., said Sunday that his panel would investigate McCabe’s comments about the 25th Amendment.

“The deputy attorney general was basically trying to do an administrative coup,” Graham said, also invoking revolutionary parlance, on CBS’s “Face the Nation.”

Rosenstein may already be on his way out. He told people close to him that he plans to leave the Justice Department if a new attorney general is confirmed, The Post reported in January. William P. Barr was confirmed as attorney general last week.

The Justice Department declined to comment, and the White House did not respond to questions about the president’s tweets and Rosenstein’s future.