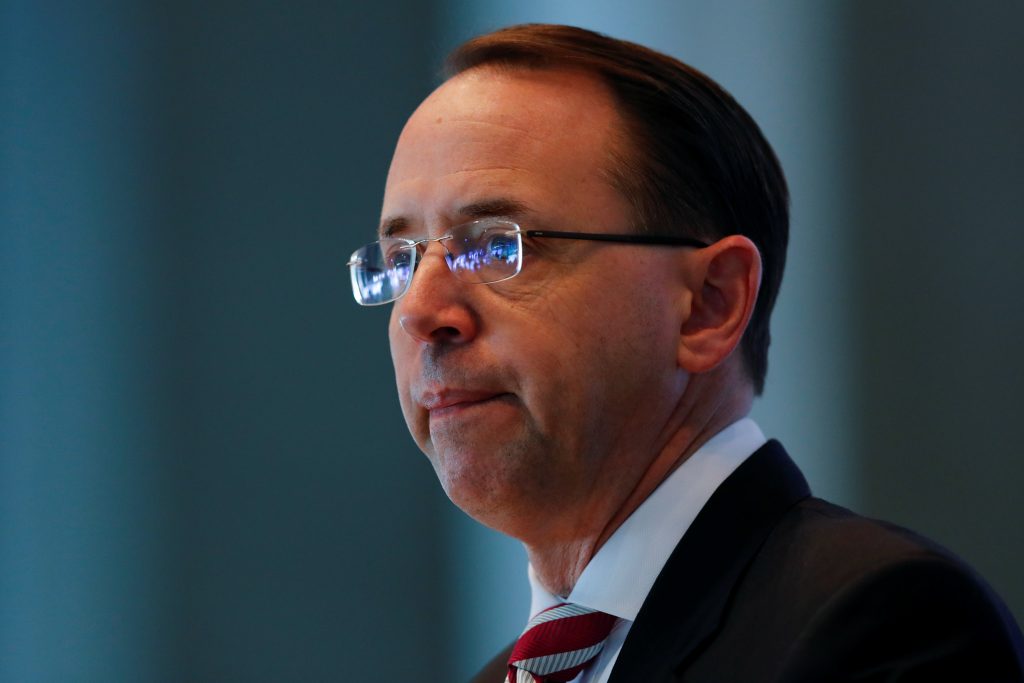 Graham was responding to comments made by McCabe in an interview with CBS News’ “60 Minutes,” which was broadcast Sunday night.

“There’s an allegation by the acting FBI director at the time that the deputy attorney general was basically trying to do an administrative coup, take the president down (through) the 25th Amendment process,” Graham said in an appearance on CBS. “The deputy attorney general denies it. I promise your viewers the following: that we will have a hearing about who’s telling the truth, what actually happened.”

He added that he will subpoena McCabe and Rosenstein if necessary.

Graham spokesman Kevin Bishop said no further details were available on the timing of the hearing.

In the “60 Minutes” interview, McCabe said Rosenstein raised the idea of using the 25th Amendment to remove Trump out of concern about the president’s “capacity and about his intent at that point in time.”

The conversation, he said, occurred in the hectic days after Trump fired James Comey as FBI director.

Rosenstein was “counting votes or possible votes” among Cabinet members on whether to oust Trump, McCabe told CBS’ Scott Pelley.

The 25th Amendment establishes a process for the Cabinet to force the president’s removal if he is unable to perform his duties.

McCabe’s spokeswoman said in a statement Friday that he did not participate in any “extended discussions” about using the 25th Amendment, nor was he aware of any.

McCabe said Rosenstein also “offered to wear a wire into the White House,” in the context of a discussion about why Trump fired Comey and his fixation on Russia.

“He said, ‘I never get searched when I go into the White House. I could easily wear a recording device. They wouldn’t know it was there,’ ” McCabe said, describing what Rosenstein allegedly told him. “He was not joking.”

Rosenstein has disputed previous reports describing allegations by McCabe that he had discussed the topic. The Justice Department again pushed back in a statement late last week.

In Sunday’s interview, Graham described the issue as one of national concern.

McCabe “went on national [media] and he made an accusation that floors me. … We’re going to find out what happened here, and the only way I know to find out is to call the people in under oath and find out, through questioning, who’s telling the truth, because the underlying accusation is beyond stunning,” the senator said.

McCabe said in the “60 Minutes” interview that the bureau and Justice Department were thrown into turmoil after Comey’s firing, and that he and Rosenstein were concerned about Trump’s motives. McCabe said Rosenstein, who wrote a memo supporting Comey’s removal, told him that Trump had wanted him to mention Russia in that document, though Rosenstein ultimately did not do so.

McCabe said that decision – coupled with Comey’s firing and the president’s public comments deriding the examination of Russian interference in the 2016 election – helped convince the FBI to open an investigation into Trump personally.

“If the president committed obstruction of justice, fired the director of the FBI to negatively impact or to shut down our investigation of Russia’s malign activity and possibly in support of his campaign, as a counterintelligence investigator you have to ask yourself, ‘Why would a president of the United States do that?’ ” McCabe said.

He said investigators wondered, “Is there an inappropriate relationship, a connection between this president and our most fearsome enemy, the government of Russia?”

The FBI’s investigation was ultimately taken over by special counsel Robert Mueller. McCabe said he had pushed for the probe to have an independent overseer, though Rosenstein – who appointed Mueller – had concerns.

“It might mean that he would lose his job,” McCabe said.

McCabe ultimately did lose his own job, after an inspector general inquiry found that he lied to investigators exploring a media disclosure. McCabe said on “60 Minutes” that he did not intentionally lie, and he believes his termination was politically motivated.

“I believe I was fired because I opened a case against the president of the United States,” McCabe said.