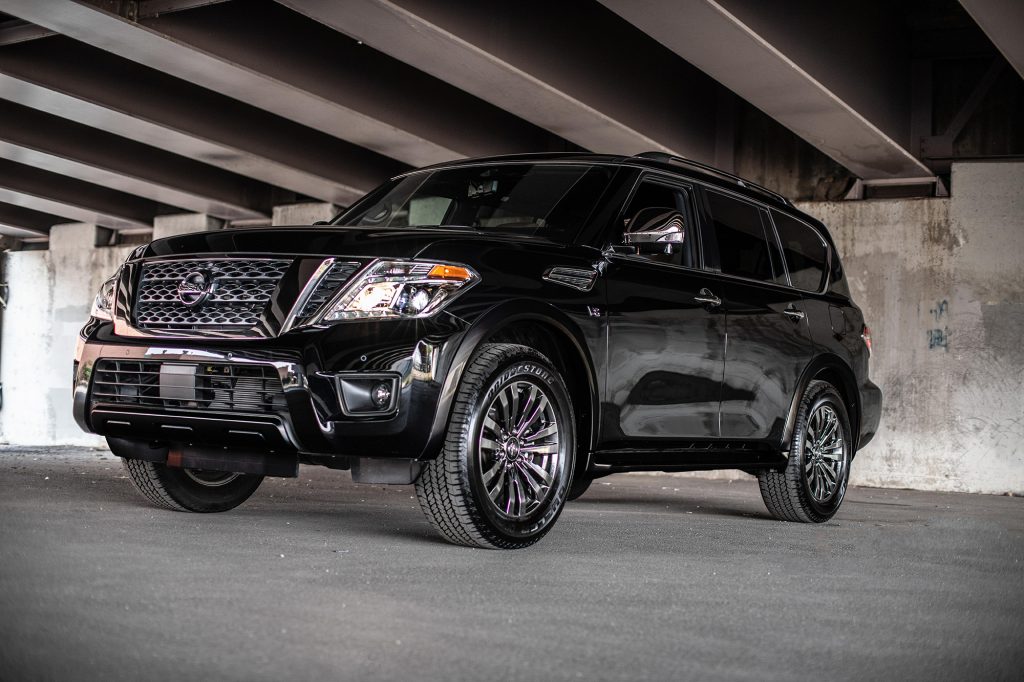 The Nissan Armada full-size sport utility, now in its second generation, returns for 2019 with a few updates, including new standard safety technology.

Extras on the Platinum Reserve include Dark Chrome on the grille, door handles and outside mirrors; special 20-inch Dark Chrome wheels; two-tone leather seats with unique stitching; Black Quartz and premium wood-tone interior trim; and an embossed “Platinum Reserve” emblem on the lid of the center console.

The Platinum and Platinum Reserve models come with the Intelligent Rear-View Mirror, which uses a high-resolution camera at the rear exterior to transmit a rear-facing image onto a monitor built into the center rearview mirror. But there is a switch at the bottom of the mirror that lets the driver change between camera and standard mirror views.

Armada’s second generation is based on the architecture of the similar Infiniti QX80 luxury SUV.

The original Armada was introduced in 2004 as the Pathfinder Armada, and was built on the same chassis as the Nissan Titan pickup. It was assembled at the Nissan plant in Canton, Miss. Now, the Armada comes from the same plant in Kyushu, Japan, that has been assembling the QX80 since it moved into its second generation for 2011.

Ever since the midsize, seven-passenger Nissan Pathfinder was shifted to a car-based crossover format five years ago, the Armada is the only three-row, truck-based SUV left in the Nissan lineup.

Inside, there is seating for up to eight people, and it still has a conventional body-on-frame design rather than the unibody construction of a crossover. It’s 1.2 inches longer overall than the first-generation Armada, but has a 2.1-inch shorter wheelbase. It’s 0.6 inches wider and 2.2 inches lower.

The Armada can be configured for seven passengers by replacing the standard three-person second-row bench seat with two captain’s chairs ($450 extra). That lowers the capacity to two in front, two in the middle and three in the rear.

We tested the 2019 Armada SV with all-wheel drive and the standard eight-passenger arrangement (base price $49,790). We didn’t need the third row during our week with the Armada, but it can easily accommodate big kids or average-size adults.

For some trips, we did have two adult passengers in the middle row, and they found their seats to be quite roomy and comfortable.

The Armada is high enough off the ground (9.1-inch ground clearance for the SV, 9.2-inch for the other trims) that it can be a bit difficult to get into from outside, especially for short people. To help, there are steel side step rails with rubber pads on each side.

Armada competes in the full-size SUV class along with the Chevrolet Tahoe/Suburban and its siblings, the GMC Yukon/Yukon XL, as well as the Ford Expedition and Toyota Sequoia. Also in the mix is the Lincoln Navigator, which also is a direct competitor of the QX80.

All trim levels of the Armada come with a 5.6-liter Endurance V-8 engine, rated at 390 horsepower and 394 foot-pounds of torque. It’s connected to a seven-speed automatic transmission. This powerful engine moves the Armada quite easily, and offers plenty of passing and towing power. Trailers up to 8,500 pounds can be accommodated.

EPA ratings are 14 city/19 highway/16 combined for rear-drive models, and 13/18/15 for four-wheel-drives. During our test week, with about 70 percent interstate highway driving, we averaged 16.7 mpg.

The now standard Intelligent Cruise Control on our Armada was very precise, holding the vehicle to the preset speed with little or no variation going uphill or down. Unlike some high-end vehicles, the Armada’s cruise control can be adjusted up or down in 1 mph increments, and the driver can see the set speed on a digital readout in the center of the instrument panel.

For the second generation, the Armada got a completely new exterior similar to that of the QX80. Nissan says there was an increase of 20 percent in body stiffness, helping to enhance handling and ride comfort.

Corners and edges are more rounded than those of the previous Armada, and this vehicle sits up above most other vehicles, giving driver and passengers great outward visibility.

We also had dual-zone front automatic climate control and rear climate control with rear controls; rearview monitor; side and rear privacy glass; and power outside mirrors with turn signals.

Other exterior elements include a black V-motion grille and standard LED low-beam headlights with halogen high beams and LED Daytime Running Lights. Headlights are automatic on/off, and there are fog lights on the SL, Platinum and Platinum Reserve models (optional on SV).

At the rear, there are LED taillights. There are functional air intake vents on the front fenders. Chrome-plated electro-chromatic mirrors with memory, heat and puddle lamps are standard on SL and Platinum models.

The Armada has 16.5 cubic feet of cargo space behind the third-row seat, or 49.9 cubic feet with the third-row seatbacks folded down. We hauled some Home Depot purchases in the rear with the third row folded, and had lots of room for everything we bought. A power tailgate with an auto-closing feature is standard on SL and Platinum/Platinum Reserve models, but optional on the SV in the Driver Package ($600), included on our tester. It also brought front fog lights, auto-dimming rearview mirror, power-folding third-row seat, power tailgate, and trailer wiring harness.

SV models have premium cloth seats, while leather is standard on SL and Platinum/Platinum Reserve. Three interior colors are offered – Charcoal and Almond (cloth and leather) and Tan (leather only).

Because this is a truly off-road-capable SUV, the all-mode four-wheel drive features low-range gearing with a two-speed transfer case for extreme trail driving. We didn’t take our Armada on any serious off-road trails, but did explore some unpaved park roads.

Three wheel and tire combinations are offered, depending on the model, either 18 or 20 inches. Our SV model came with 18-inch alloy wheels.

Besides the Driver Package, the only other extra on our SV four-wheel-drive Armada was the carpeted floor mat/cargo mat package ($315).

The exterior of our tester was a very nice Gun Metallic color (dark gray).

Total sticker price was $52,100, including freight and options.

Highlights: The Armada was redesigned for 2017 to mirror the premium Infiniti QX80 model on which it is based. A Platinum Reserve model was new for 2018, and more high-tech safety features were added for 2019. This is a big, premium family hauler with lots of power, a smooth ride, and a long list of available comfort, convenience and safety features.

Negatives: Can get pricey with all the extras.