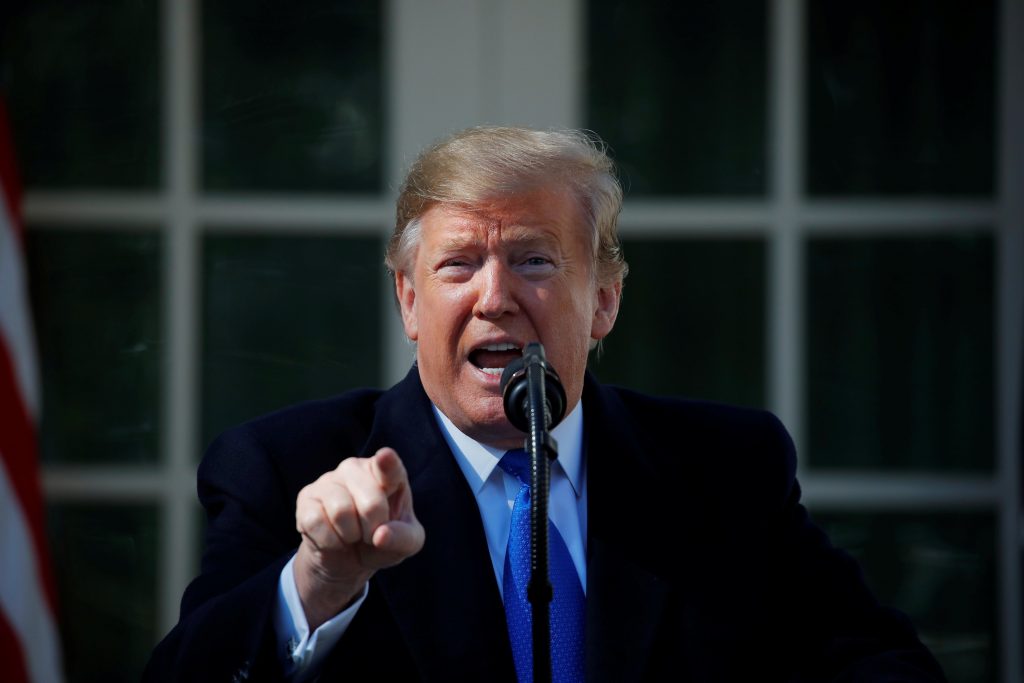 President Donald Trump on Friday announced he would declare a national emergency at the U.S.-Mexico border, a move Democrats vowed to challenge as an unconstitutional attempt to fund his promised border wall without approval from Congress.

“I’m going to be signing a national emergency,” Trump said from the Rose Garden of the White House.

The president said he would sign the authorizing paperwork later in the day in the Oval Office.

Trump was also expected on Friday to sign a bipartisan government spending bill approved by Congress on Thursday that would prevent another partial federal government shutdown by funding several agencies that otherwise would have closed on Saturday morning.

The bill is a defeat for Trump in Congress, where his demand for $5.7 billion in barrier funding yielded no results, other than a record-long, 35-day, December-January partial government shutdown that damaged his opinion poll numbers.

Reorienting his wall-funding quest toward a legally uncertain strategy based on declaring a national emergency could plunge Trump into a lengthy battle with Democrats – and divide his fellow Republicans.

Fifteen Democrats in the Republican-controlled Senate introduced legislation on Thursday to prevent the transfer of funds from accounts Trump likely would target to pay for his wall.

Nancy Pelosi, the Democratic Speaker of the House of Representatives, and Chuck Schumer, the Senate’s top Democrat, swiftly responded to Trump’s declaration.

“The president’s actions clearly violate the Congress’s exclusive power of the purse, which our Founders enshrined in the Constitution,” they said in a statement. “The Congress will defend our constitutional authorities in the Congress, in the courts, and in the public, using every remedy available.”

The president acknowledged that his order would face a lengthy legal challenge. “We’ll win in the Supreme Court,” Trump said.

Trump has argued the wall is needed to curb illegal immigrants and illicit drugs streaming across the southern border.

Statistics show illegal immigration there is at a 20-year low and many drug shipments are likely smuggled through legal ports of entry.

At Friday’s White House event, a half-dozen women holding poster-sized pictures of family members killed by illegal immigrants preceded Trump into the Rose Garden. He cited their presence in announcing the emergency declaration.

A senior White House official, speaking on condition of anonymity, said the administration had found nearly $7 billion to reallocate to the wall, including $600 million from a Treasury Department forfeiture fund, $2.5 billion from a Defense Department drug interdiction fund and $3.5 billion from a military construction budget.

Trump on Friday estimated the order could free up as much as $8 billion to construct the wall.

The funds would cover just part of the estimated $23 billion cost of the wall promised by Trump along the nearly 2,000-mile border with Mexico.

The Senate Democrats’ bill also would stop Trump from using appropriated money to acquire lands to build the wall unless specifically authorized by Congress.