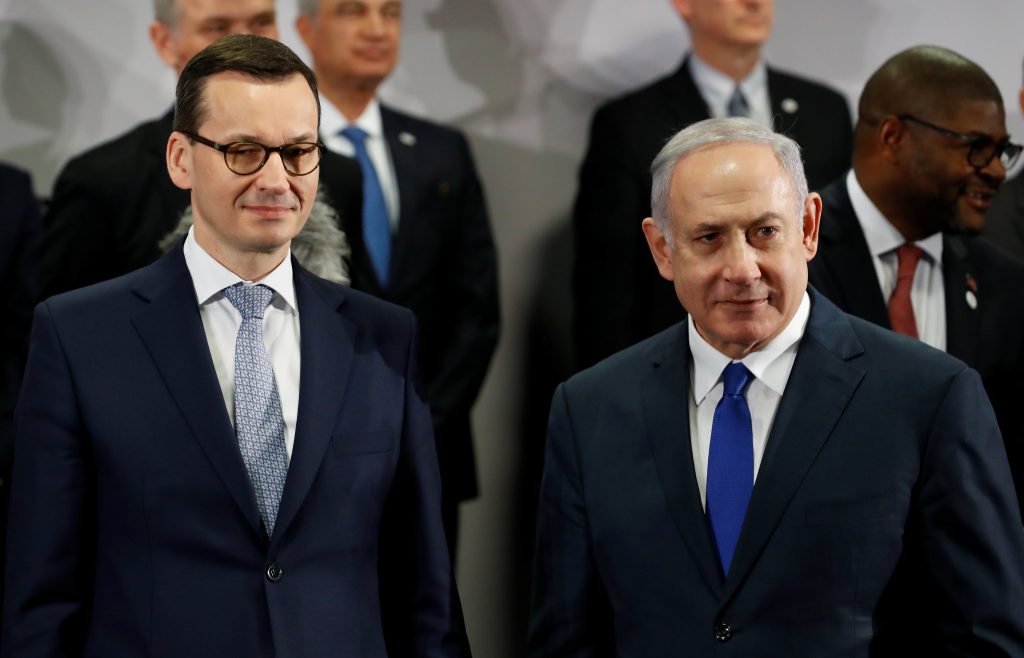 Poland on Friday morning appeared to settle a diplomatic spat with Israel over comments made by Prime Minister Binyamin Netanyahu on Polish collaboration with the Nazis, saying it had received clarifications from the Israeli government that had alleviated its concerns.

Netanyahu was asked Thursday in Warsaw about Holocaust historical revisionism in Poland by a reporter and replied: “Here I am saying Poles cooperated with the Nazis. I know the history and I don’t whitewash it. I bring it up.”

Last year, Poland and Israel were embroiled in a bitter dispute over a Polish law that made it a crime to blame the Polish nation for Holocaust crimes. Israel saw it as an attempt by Poland to suppress discussion of the killing of Jews by Poles during the wartime German occupation.

The dispute was resolved when Poland softened the law and Netanyahu and his Polish counterpart agreed on a joint declaration stressing the involvement of the Polish resistance in helping Jews. It was seen as a diplomatic coup for Poland but Netanyahu faced criticism from historians in Israel, including at Yad Vashem, for agreeing to a statement that they said distorted history.

“The idea that we distort history or hide it is nonsense,” Netanyahu said.

Some reporters heard “Poland collaborated with the Nazis,” a statement which is illegal in Poland and provocative to the Polish government.

These reports led Duda to threaten to pull out of a high-level summit slated to take place next week in Israel.

Duda wrote on Twitter that if Netanyahu indeed made the comments, he would offer to host an upcoming meeting of the so-called Visegrad group himself instead of holding the meeting in Israel.

Israel is set to host the prime ministers of the four countries in the group — Poland’s Mateusz Morawiecki, the Czech Republic’s Andrej Babis, Slovakia’s Peter Pellegrini, and Hungary’s Viktor Orban — in Yerushalayim on February 18-19.

“In this situation, Israel is not a good place to meet,” Duda had said.

Israel’s embassy in Poland contacted the Polish leadership Thursday night and clarified that Netanyahu “didn’t say the Polish nation carried out crimes against Jews, but only that no one has been sued under the Holocaust law for saying ‘Poles’ collaborated.”

Nevertheless, there were conflicting signs as to whether the matter had been laid to rest, with unconfirmed reports in Polish media that Israeli Ambassador Anna Azari had been summoned by Poland’s Foreign Ministry for clarification. Israel’s Foreign Ministry did not immediately comment on the claims.

Meanwhile, Netanyahu was forced to spend an extra night in Warsaw after his plane was damaged shortly before takeoff, marking an inauspicious ending to a turbulent visit.

The prime minister and his entire entourage were on-board a chartered El Al plane early on Friday, after a two-day visit to a high-profile security conference, when a vehicle towing the aircraft on the runway crashed into it.

A photo circulated to traveling journalists showed large scrapes in the underbelly of the aircraft.

Netanyahu and his wife were taken off the plane and ushered back to their hotel. Other aides, including Netanyahu’s national security adviser and his military secretary, spent the night on the aircraft, saying they did not want to go through the hassle of pre-boarding security checks again.

A replacement plane was dispatched from Israel to urgently return the prime minster before Shabbos. The plane took off late Friday morning.

It capped a tumultuous visit for Netanyahu, who was in Poland for a U.S.-sponsored security conference attended by several high-profile Arab officials from Gulf countries.

Netanyahu had hoped to use the gathering to showcase his budding ties with the Gulf Arabs. But a verbal gaffe and a video leaked by his office threatened to overshadow the event.

On the eve of the meeting, Netanyahu appeared to call on other participants to prepare for “war with Iran.” His office later said he had been mistranslated and only called on other countries to “combat” Iranian influence in the region.

Netanyahu’s office said the video’s release was a “technical error” and quickly deleted it.