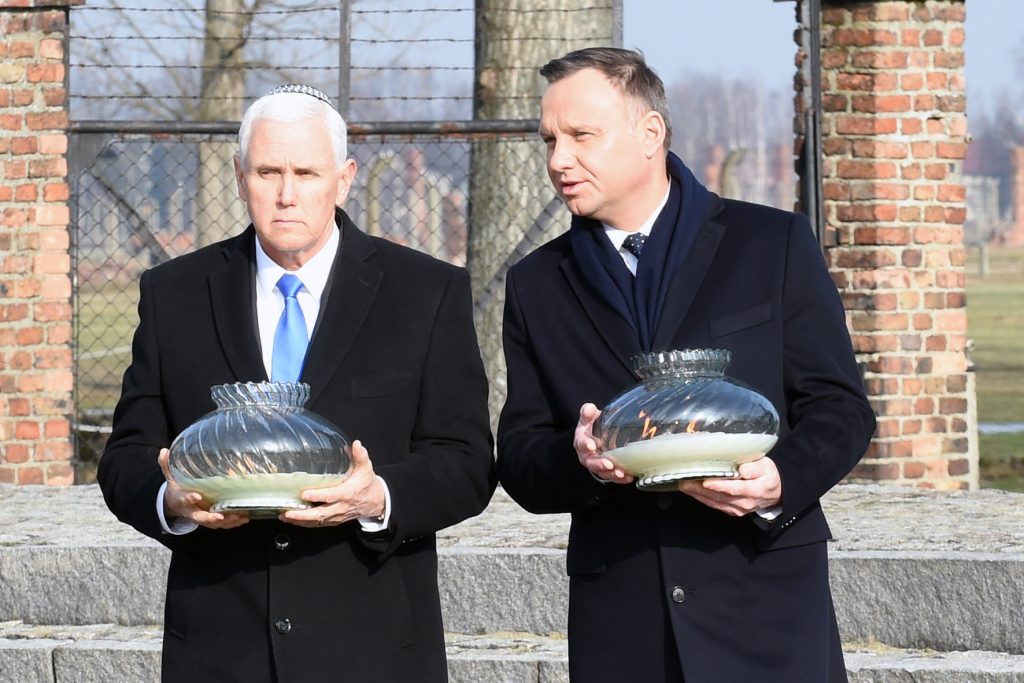 U.S. Vice President Mike Pence visited the memorial site of Auschwitz on Friday along with the Polish president and Jared Kushner, the son-in-law of President Donald Trump, viewing a train car, crematoria and the hair of victims that make it such a powerful testament to the evil that befell Europe’s Jews in the last century.

It was the first visit for Pence, a conservative Christian, to the site where German forces murdered 1.1 million people, most of them Jews but also Poles, Roma and others, during the Nazis’ occupation of Eastern Europe during World War II.

They began their visit by walking under the notorious gate with the German words “Arbeit Macht Frei,” the Nazi slogan meaning “Work sets you free.”

There, they paused and turned toward reporters, who took their photos.

Pence toured an exhibition hall that includes human hair and personal belongings of the victims before a wreath-laying at the Death Wall in a courtyard where prisoners were executed. Many of those shot there were Poles who were part of the underground resistance against the German occupation.

The two couples walked side-by-side to the wall for the wreath laying. The Pences held hands and the vice president adjusted a banner reading “From The People of the United States of America.”

Kushner was among a second group that then approached the wall and wreaths.

The second part of the visit took them to the nearby satellite camp of Birkenau, the site of the murder of Jews from across Europe. Pence knelt and bowed his head, placing his hand on a historic red train car on the tracks used to bring Jews to their deaths there.

The couples also placed candles at a memorial to the Holocaust victims. Poland’s chief rabbi recited a prayer for the dead.

The visit comes a day after Pence also visited sites commemorating the suffering of the Jewish and Polish people in Warsaw during the war.

It also comes a day after Pence accused Britain, France, Germany and the European Union as a whole of trying to evade U.S. sanctions on Iran, and called on the EU to join the Trump administration in withdrawing from the landmark 2015 nuclear deal with Iran.

In his speech, Pence said that “the Iranian regime openly advocates another Holocaust.”

Pence is on a four-day visit to Europe that included meeting with Polish soldiers and American troops in Poland and a conference on the Middle East that concluded Thursday. His next and final stop is the Munich Security Conference in Germany.

Kushner, Trump’s senior Middle East adviser, briefed participants at the Warsaw conference on a plan he has been working on for an Israeli-Palestinian peace deal. The details weren’t made public.