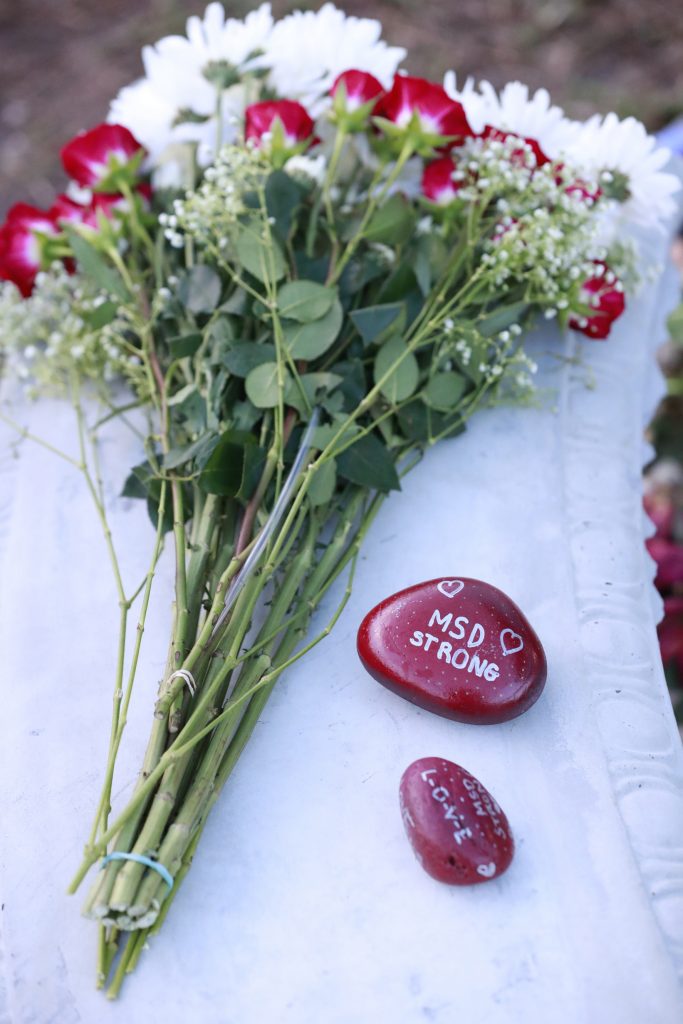 Hundreds of thousands of students and adults across Florida and beyond observed a moment of silence Thursday to mark the first anniversary of the shooting rampage at Marjory Stoneman Douglas High School in Parkland that left 17 people dead.

“It’s a permanent sore spot,” said Fort Lauderdale High School junior Jake Lynch. “Forever, me going forward, I’ll feel this day, and this time and those names. It reminds me of where I want the world to be. … From suffering better things come out.”

The massacre on Feb. 14, 2018 inflamed the national debate over guns, turned young people into political activists and gave rise to some of the biggest youth demonstrations since the Vietnam era.

The moment of silence was observed at 10:17 a.m., though the shooting actually began around 2:20 p.m. School officials picked a different time because Stoneman Douglas students were being dismissed early to avoid being on campus at the hour of the attack. The decision to hold it at 10:17 was made in honor of the 17 slain.

Many Stoneman Douglas students arrived wearing the burgundy #MSDStrong T-shirts that have become an emblem of the tragedy. Outside, clear plastic figurines of angels were erected for each of the 14 students and three staff members killed.

Reporters were not allowed inside the school, but students were working on service projects, and grief counselors and therapy dogs were made available. Students could also receive massages and pedicures.

“I want to show respect to what happened,” freshman Matthew Sabia said. “The students who were here are probably sad and don’t want to think too much about it. We don’t really talk about it.”

Many Stoneman Douglas students skipped school. For some it was too emotional; others did not want to be in the spotlight.

Alexis Grogan, a junior, said she was spending the day picking up beach trash, dedicating her work to those who died.

“I survived something and I don’t want to waste what I call a second chance at life because those who have passed don’t get that,” she said. “We have to make a difference for them.”

Classes were almost over that day when authorities say 19-year-old former student Nikolas Cruz stormed the place with an AR-15 assault rifle and began shooting. Cruz, 20, is awaiting trial.

Victims’ families who have spoken publicly said they would spend the day quietly, visiting their loved ones’ graves or participating in low-key events like a community walk.

“We don’t need [the anniversary] to remind us what happened. We live with it every day,” said businessman Andrew Pollack, whose 18-year-old daughter Meadow died in the attack.

The massacre led some Stoneman Douglas students to form the group March for Our Lives, which holds rallies around the country for tougher gun regulations and registers young people to vote.

Schools elsewhere around the country and Florida took time to remember the victims.