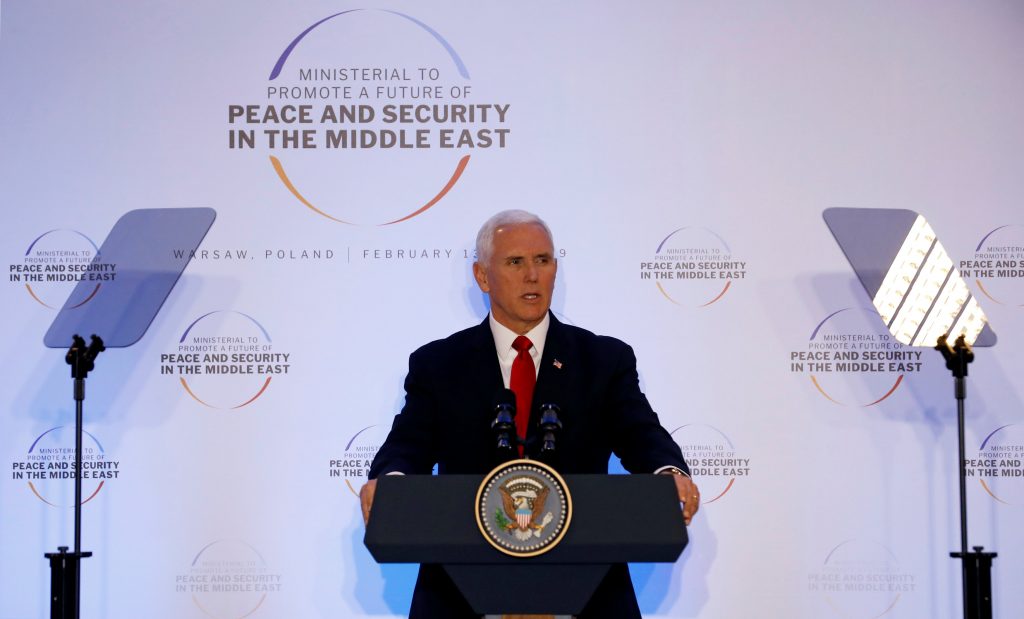 The Trump administration lashed out at some of America’s closest traditional allies on Thursday, accusing Britain, France and Germany of trying to “break” U.S. sanctions against Iran and calling on European nations to join the United States in withdrawing from the landmark 2015 Iranian nuclear deal.

In an unusually blunt speech to a Middle East conference in Poland, Vice President Mike Pence slammed the three countries and the European Union as a whole for remaining parties to the agreement after the Trump administration withdrew from it last year and re-imposed tough sanctions on Iran.

The harsh criticism threatened to further chill U.S.-European ties, already badly strained, including over the Iran focus of the Warsaw conference, co-hosted by the U.S. and Poland. France and Germany had declined to send their top diplomats to the foreign minister-level meeting and E.U. foreign policy chief Federica Mogherini also stayed away.

Pence was especially critical of Britain, France and Germany for unveiling last month a new financial mechanism that U.S. officials believe is intended to keep the nuclear deal alive by evading American sanctions. Pence praised other nations for complying with the sanctions by reducing Iranian oil imports but said the Europeans fell short.

“Sadly, some of our leading European partners have not been nearly as cooperative,” Pence said. “In fact, they have led the effort to create mechanisms to break up our sanctions.”

He said the mechanism, known as the “special purpose vehicle,” is “an effort to break American sanctions against Iran’s murderous regime.” ”It’s an ill-advised step that that will only strengthen Iran, weaken the E.U., and create still more distance between Europe and the United States.”

Pence then called for Europe to abandon the nuclear agreement.

“The time has come for our European partners to withdraw from the Iran nuclear deal and join with us as we bring the economic and diplomatic pressure necessary to give the Iranian people, the region and the world the peace security and freedom they deserve,” he said.

The U.S. and Poland say the conference is aimed at promoting peace and security in the Mideast and discussing issues such as Syria, Yemen, the fight against the Islamic State, the Israeli-Palestinian conflict, cybercrime and terrorism.

The conference was attended by representatives from numerous Arab countries, but notable absences include Russia, China, and the Palestinians, who have called for the meeting to be boycotted.

Meanwhile, Russian President Vladimir Putin was meeting the presidents of Iran and Turkey on Thursday in the Russian Black Sea resort of Sochi to discuss a Syria peace settlement, as expectations mount for an imminent and final defeat of the Islamic State group ahead of the U.S. pullout.

In Warsaw, Prime Minister Binyamin Netanyahu lauded the participation of high-profile Arab dignitaries at the conference, saying it marked a “historical turning point” that signaled a shift in regional priorities.

“In a room of some 60 foreign ministers and representatives of dozens of governments, an Israeli prime minister and the foreign ministers of the leading Arab countries stood together and spoke with unusual force, clarity, and unity against the common threat of the Iranian regime,” Netanyahu said. “I think this marks a change, an important understanding of what threatens our future.”

While Secretary of State Mike Pompeo said in his opening remarks that “No one country will dominate the discussion today nor will any one issue dominate our talks” his earlier comments and Pence’s keynote speech made clear that the conference was largely focused on isolating Iran.

Iran has denounced the gathering as an American anti-Iran “circus” aimed at “demonizing” it.