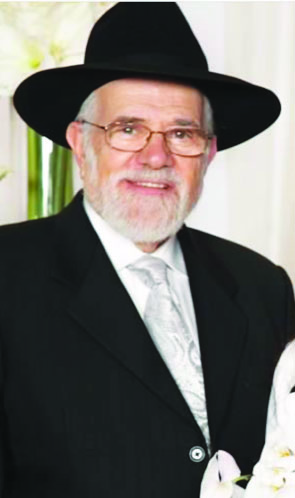 A model of an individual who, without fanfare, was osek b’tzarchei tzibbur b’emunah, with the utmost uprightness and dedication he gave his life to the needs of the kehillah that he was a member of for all of his life, and for the klal at large.

One who maintained a unique ability to combine disparate traditions with seeming ease, Rabbi Katzenstein fused the traditions and hashkafah of the “Breuer’s” kehillah together with all he had absorbed in his years in the batei medrash of Yeshivas Rabbi Jacob Joseph, Torah Vodaath, Telshe, and Yeshivas Rabbeinu Chaim Berlin.

With disparate talents and seemingly endless time and energy, Rabbi Katzenstein would be among the most central and involved leaders of KAJ as well as an askan at large, all while maintaining a private business and serving as a highly-sought-after mohel.

Rabbi Katzenstein was born in 1936 in Frankfurt. There, his father, Reb Meir (Manfred) Katzenstein, z”l, was among the prominent members of the kehillah that had been established decades earlier by Harav Samson Raphael Hirsh, zt”l, and was then under the leadership of Harav Levi Yosef Breuer, zt”l. His mother, Mrs. Esther Katzenstein, a”h, hailed from the town of Fulda where her father, Reb Yonah Eschwege, z”l, served as the community’s baal tefillah.

Realizing the dire threat to Jews in Germany, just after Kristallnacht the family fled Frankfurt and immigrated to the United States. Settling in Washington Heights, the elder Mr. Katzenstein worked steadfastly alongside Rav Breuer, who had also settled in the neighborhood, to reestablish their kehillah on American shores. The spirit of tireless dedication to the klal that permeated the home made an indelible impression on the Katzensteins’ young son Yitzchok, who would follow in his father’s footsteps as a loyal soldier for the needs of the tzibbur.

Young Edwin was a member of the very first class of K’hal Adas Yeshurun’s elementary school. He would later go on to learn at Yeshivas Rabbi Jacob Joseph and Torah Vodaath, before traveling to Cleveland to join Yeshivas Telshe. The years Rabbi Katzenstein spent in Telshe had a strong and lasting impact on the budding ben Torah. There he absorbed the depth of machshavah in both Torah and mussar as taught by his Rebbeim, zt”l: Harav Elya Meir Bloch, Harav Mottel Katz, Harav Baruch Sorotzkin, Harav Eizick Ausband, Harav Pesach Stein and Harav Elozer Levi.

In addition, Telshe, with its emphasis on service of the klal under the direction of Gedolei Yisrael, moved him to forge what would be a lifelong relationship with Agudas Yisroel, which would result in several different roles over the course of Rabbi Katzenstein’s life.

Following his years in Telshe, Rabbi Katzenstein joined Yeshivas Rabbeinu Chaim Berlin, where he would form a close bond with the venerated Rosh Yeshivah, Harav Yitzchok Hutner, zt”l, who would eventually award him semichah.

In 1958, Rabbi Katzenstein married, tbl”c, Ruth Nager, daughter of Mr. Julius, z”l, and Mrs. Eva, a”h, Nager, both born in Germany, but their families fled to Lisbon, Portugal, where they worked to help other Jews escaping the Nazis. The family would ultimately settle in Washington Heights.

The young Katzenstein couple also settled in Washington Heights near both of their families. Throughout the decades of their marriage, Mrs. Katzenstein dutifully supported her husband in his many endeavors on behalf of the klal.

After two years in Chaim Berlin’s kollel, Rabbi Katzenstein joined his father in the family business.

Despite the obligations of his professional life and despite his youth, Rabbi Katzenstein threw himself into the task of working on behalf of KAJ soon after his marriage.

Upholding the kehillah and its proud mesorah defined his essence. There was hardly an aspect of running KAJ in which Rabbi Katzenstein was not involved. Over the decades he would serve as a KAJ board member, a yeshivah board member, president of the chevrah kaddisha, and chairman of the kashrus committee. Following the passing of KAJ’s long-time president, Dr. Raphael Moller, z”l, Rabbi Katzenstein took over the helm of KAJ’s lay leadership for several years.

His dedication gave him the opportunity to forge close relationships with the kehillah’s Rabbanim and throughout the years he was in constant consultation with Rav Breuer, and later with Harav Shimon Schwab, zt”l, and Harav Zechariah Gelley, zt”l.

His shimush, so to speak, of KAJ’s leaders began at a young age, when as a boy he would assist Rav Breuer on his walk to shul each morning, a privilege Rabbi Katzenstein would reclaim upon his return to Washington Heights as a grown man.

For countless individuals as well, Rabbi Katzenstein was an address to turn to in times of personal need, whether seeking advice, a referral, or, on many occasions, financial assistance. The problems of others constantly weighed on his mind and he was often thinking of what more he could do for those who sought his help.

Despite the obvious challenges and sensitive decisions involved in his communal work, Rabbi Katzenstein went to tremendous lengths to maintain peace among the many groups and individuals he dealt with. Even on occasions where he felt compelled to disagree or even rebuke, he was fast to follow up his words with a personal sign of friendship to ensure that his words or acts would not cause any personal acrimony.

Amidst his myriad responsibilities, Rabbi Katzenstein was meticulous in his sedarim set aside for limud Torah. He not only kept up with but was often ahead of the Daf Hayomi which he studied and reviewed meticulously.

For all of his life, Rabbi Katzenstein faithfully upheld the many minhagim of the Frankfurt kehillah. A master of nusach and of tefillah in general, for many years he served as one of KAJ’s baalei tefillah on the Yamim Nora’im.

Rabbi Katzenstein was in good health and active until his last day. He was niftar suddenly on Friday night during the Shabbos seudah after reviewing a dvar Torah from Rav Schwab.

The levayah was held last Sunday at KAJ followed by kevurah in the kehillah’s plot at King Solomon Memorial Park in Clifton, New Jersey.